The No. 18 Texas Tech Red Raiders and the No. 3 Baylor Bears close out regular season play in the Big 12 this Sunday at Ferrell Center. Game time on ESPN is set for 4 p.m. (ET).

Baylor gets the nod as an eight-point home favorite for its season finale. The total line has been opened at 140.5 points.

Texas Tech has won its last three games both straight-up and against the spread. It is now 9-7 SU in Big 12 play with a 5-11 record ATS. The total has stayed UNDER in four of its last five contests.

The Red Raiders lost to Baylor by eight points on Jan. 16 as four-point underdogs. They have lost five of the last six meetings SU with a 2-4 record ATS. Baylor is 12-1 SU in conference play but it falls to 6-7 ATS after failing to cover in four of its last six games. The total has gone OVER in eight of its last nine outings.

The Bears’ lone SU loss against 20 victories came against Kansas on the road late last month. They are a perfect 10-0 SU at home this season. Yet, they have failed to cover in four of their last five home games. The total has gone OVER in all five contests. 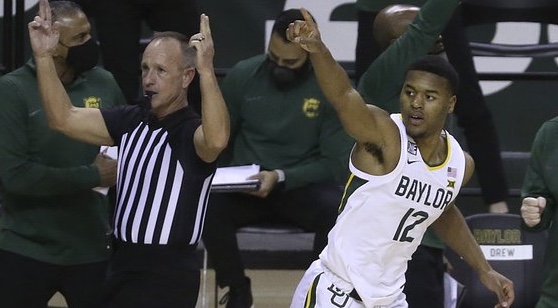 The Red Raiders piled up 81 points in Thursday’s lopsided 27-point win at home against Iowa State. Mac McClung led the way with 20 points.

The junior guard continues to lead the way in scoring with 16.4 points per game while shooting 42.7% from the field and 33.6% from three-point range. Guard Terrence Shannon (12.5 points) leads another trio of players scoring at least 10 PPG.

Texas Tech has averaged a total of 73.3 points and 35.5 rebounds a game this season. It is shooting 44.4% from the field and 34% from outside the three-point line.

Defensively, the Red Raiders have not allowed more than 59 points in each of their last three games. The team’s points-allowed average this season stands at 62.3.

Baylor has already locked up the Big 12 regular season title and the No. 1 seed for the upcoming conference tournament. The main motivation for Sunday is to stay perfect at home.

Jared Butler had the hot hand with 22 points in Thursday’s nine-point win at home over Oklahoma State. This surpassed the junior guard’s team-high 17.1-point scoring average this season. He is shooting 48.7% from the field and 44.3% from three-point range.

The Bears have four different players scoring at least 10 PPG as part of the team’s 85.2-point scoring average this season. They are shooting 49.6% from the field with a shooting percentage of 42.0 from outside the three-point line.

Baylor has been equally impressive on defense this season with a points-allowed average of 65.2. However, it has allowed 70 points or more in five of its last six games.

Texas Tech has little on the line in this game other than trying to beat an elite team on the road. Baylor could be distracted on Sunday looking ahead to a deep postseason run. Yet, by just showing up it should be able to close out the season with another SU win. In an adventurous move, I will take Texas Tech and the points to cover.

I have much more confidence in the total going OVER in Sunday’s matchup. The Bears will look to put on one final offensive show at home with defense taking a backseat for both teams.

WHERE TO BET TEXAS TECH-BAYLOR