Thursday night’s action in the second round of the 2021 Big Ten Tournament features the No. 10 seeded Indiana Hoosiers against the No. 7 Rutgers Scarlet Knights in a 6:30 p.m. (ET) tip at Lucas Oil Stadium. The Big Ten Network will carry the game.

Rutgers gets the opening nod in this matchup as a 2.5-point favorite. The total for this game opened at 131.5 points.

Indiana (7-12 SU) faded to 10th place in the final Big Ten standings after losing its final five games both straight-up and against the spread. The total stayed UNDER in the last three games.

One of those losses was an 11-point setback against Rutgers on Feb. 24. The Hoosiers closed as 3.5-point road underdogs after losing the first meeting in late January by four points as five-point home favorites. The total went OVER in each game.

The Scarlet Knights posted a SU 3-4 record over their last seven games while going 4-3 ATS. The total stayed UNDER in five of the seven games.

Indiana’s late-season slide got worse as the losses piled up. It failed to score more than 58 points in each of its last three games.

Forward Trayce Jackson-Davis has been the team’s leading scorer this season with 19.1 points per game. He also leads the way under the boards with nine of the team’s 34.6 rebounds a game.

Guard Armaan Franklin (11.6 points) has missed his past few starts with an ankle injury and he remains questionable for Thursday. The Hoosiers are averaging 70.5 PPG and shooting 43.5% from the field. This number drops to 33.1% from three-point range.

Indiana has had its issues putting points on the board lately, but it has not allowed more than 78 points during the current five-game slide. Its points-allowed average this season stands at 69.7. 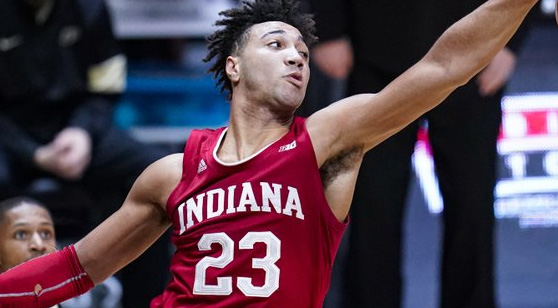 The Hoosiers will enter the Big Ten Tournament on a five-game losing skid, three of the setbacks by double digits. (AP)

Guard Ron Harper Jr. has been the team’s leading scorer this season with 15.3 PPG. He is shooting 45.6% from the field and 32.3% from three-point range. Gio Baker (10.2 points) is Rutgers’ third guard scoring in double figures. The Scarlet Knights are averaging 70.4 PPG and shooting 45.2% from the field. They are hitting 31.6% of their three-point shots while pulling down a total of 35.8 rebounds.

After giving up 70 or more points in three of its last five games, Rutgers is now allowing an average of 68.1 PPG this season.

Beating any team three times in the same season is hard to do under any circumstance. Yet, it appears that Indiana has raised the white flag on the season given its steady downward trajectory since the middle of last month. Look for Rutgers to take full advantage by competing the season sweep both SU and ATS.

The first two meetings went OVER the closing total line but I have this matchup turning into a grinder that keeps the total scoring lower than expected.