Second round action in this season’s Big Ten Tournament pits the No. 9 seeded Michigan State Spartans against the No. 8 Maryland Terrapins. Thursday’s tip-off from Lucas Oil Stadium is set for 11:30 a.m. (ET) on the Big Ten Network.

Maryland gets the slight nod in this matchup as a two-point favorite. The opening line for the total has been set at 131.5 points.

The Spartans were able to win five of their last seven games both straight-up and against the spread. The total has stayed UNDER in their last five outings.

Michigan State did lose to Maryland by 18 points last Thursday as a 2.5-point road underdog. This followed four SU wins in a row between the two. It is 3-2 ATS with the total staying UNDER in four of the five meetings.

Maryland lost its final two games as a favorite following a SU five-game winning streak. It is 4-3 ATS in those seven contests. The total has stayed UNDER in its last four games.

The Terrapins are an even 3-3 SU with a 2-4 record ATS in their last six postseason games. The total has stayed UNDER in four of those six matchups.

Following a dismal start to Big Ten play, Michigan State has played its way back into the picture for a possible NCAA Tournament bid. It will still need to win a couple more games this week to help the cause.

Guard Rocket Watts came up big in Sunday’s huge upset over Michigan with 21 points. Forward Aaron Henry added 18 points in the winning effort. Henry has been the team’s leader in both points (15.5) and assists (3.5) this season. Forward Joey Hauser is second on the team in points (9.9) with 5.9 rebounds a game.

The Spartans are scoring an average of 69.5 points per game while shooting 42.5% from the field and 32.2% from three-point range. They are pulling down an average of 37.6 rebounds a game.

After allowing fewer than 70 points in each of its last three games, Michigan State’s season average for points allowed stands at 70.7. 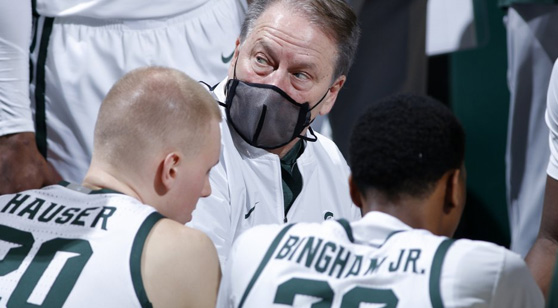 Head coach Tom Izzo and the Spartans were run by the Terrapins in late February, falling 73-55 on the road. (AP)

Maryland’s most impressive victory during the previous five-game winning streak came against Michigan State. Eric Ayala scored 22 points in that game. The junior guard leads the team in scoring this season with 14.5 PPG while connecting on 43.8% of his shots from the field.

Guard Aaron Wiggins is the team’s second-leading scorer with an average of 14 PPG. He is also second in rebounds (5.8) as part of the Terrapins’ 33.5 a game.

Maryland has averaged 68.9 points a game this season while shooting 45.8% from the field. This number drops to 35.7% from outside the three-point line.

Defensively, the Terrapins have not given up more than 66 points in six of their last seven games. This includes the losses to Northwestern and Penn State to close out the regular season.

Inside the Stats –Maryland Terrapins

It is hard to completely discount Michigan State’s 18-point loss to Maryland just a week ago. However, postseason play in a single-elimination format tends to favor teams with the most experience and success under these conditions.

For that reason alone, I'm betting on Michigan State both SU and ATS in Thursday’s contest. I'm also going with the UNDER on the total line. The Spartans have been able to tighten up their defense down the stretch, and I see that as the key to their success in this game.

WHERE TO BET MICHIGAN STATE-MARYLAND