Thursday’s quarterfinal round of the Big 12 Tournament features a matchup between the No. 6- seeded Texas Tech Red Raiders and the No. 3 Texas Longhorns at T-Mobile Center in Kansas City. Tip-off on ESPN is set for 9:30 p.m. (ET).

Texas Tech has been opened as a two-point favorite for Thursday night’s game with the betting line for the total set at 136.5 points.

Texas Tech slipped to 9-8 straight-up in Big 12 play with a 3-4 record over the last seven games. It went just 3-6 against the spread in its last nine outings. The total stayed UNDER in four of its final six regular season games.

The Red Raiders swept Texas this season (SU and ATS) by a combined 10 points. They are now 4-2 SU in the last six meetings while going an even 3-3 ATS. The total has stayed UNDER in five of the last six games between the two.

Texas went 4-1 SU and 3-1-1 ATS in its last five games with the lone loss coming against Texas Tech on Feb. 27. The total has gone OVER in four of its last six contests. The Longhorns are 4-6 SU in their last 10 postseason games and just 1-8-1 ATS.

The Red Raiders will need one more complete effort against their bitter in-state rivals to win the third meeting this season.

Guard Mac McClung will be under the spotlight Thursday after leading the team in scoring this season with 16.1 points per game. He is shooting 42.4% from the field and 33.6% from three-point range.

Guard Terrence Shannon is second on that list with 12.5 PPG. Texas Tech has been able to average 73.3 points and 35.2 rebounds a game. It is connecting on 44.5% of its shots from the field with this number dropping to 34.6% from three-point range.

The Red Raiders gave up 88 points against Baylor in their season finale on the road. However, the team’s season average for points allowed is a much more respectable 63.3. 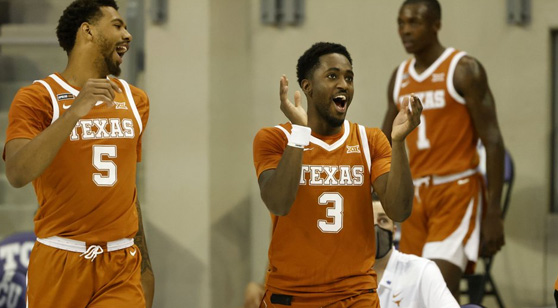 Texas has had a solid season but it hasn't solved Texas Tech, going 0-2 versus the Red Raiders this season. (AP)

Texas has to feel pretty good about its chances to advance to Friday’s semifinals after posting a strong finish in the regular season. Its SU 11-6 record was good enough to finish third in the final Big 12 standings.

Guard Andrew Jones (14.9 points) is one of four players averaging as least 11 PPG. Guard Matt Coleman is shooting 47.7% from the field, while guard Courtney Ramey has had the hottest hand from three-point range (44.8%).

Texas is scoring an average of 74.9 points while shooting 45.2% from the field. It is shooting 35.2% from outside the three-point line. The Longhorns have allowed an average of 65.3 points during the current three-game winning streak. They have given up an average of 68.2 PPG this season.

Inside the Stats –Texas Longhorns

Texas Tech can point to its season-sweep over Texas as a positive sign for Thursday’s game. Yet, from a betting standpoint, beating the same team three times in the same season can be hard to do. This is especially true given just how well these teams matchup against one another.

Given the tight spread, I'm going with Texas this time around SU and ATS. I also have the total staying UNDER the current total line. Defense could play a much more prominent role given the single-elimination nature of this matchup.

WHERE TO BET TEXAS TECH-TEXAS