The Big Ten Tournament quarterfinals get underway on Friday with the No. 8 seeded Maryland Terrapins taking on the top seeded Michigan Wolverines. Game time at Lucas Oil Stadium is 11:30 a.m. (ET) with the Big Ten Network carry the national broadcast.

The opening spread for this matchup favors Michigan by 8.5 points. The betting line for the total is 133 points.

Maryland opened tournament play with an 11-point victory over Michigan State as a slight 1.5-point favorite. The total stayed UNDER 129 points. It is now 6-2 straight-up and 5-3 against the spread in its last eight games. The total has stayed UNDER in the last five outings.

Head-to-head, the Terrapins lost both regular season meetings (SU and ATS) this season by a combined 35 points. They are 1-6 SU in their last seven games against Michigan and 1-5 ATS in the last six matchups.

Michigan ended the regular season with a six-point loss to Michigan State as an eight-point road favorite. Starting with an 87-63 rout at home over Maryland on Jan. 19, the Wolverines are 8-2 SU and 7-3 ATS in their last 10 games. The total has stayed UNDER in their last five contests. The total has gone OVER in five of Michigan’s last six games against the Terrapins.

These two players have been the top two scorers all season long. Ayala (14.7 points) is shooting 43.3% from the field. He also leads the team in steals with 1.2 a game. Wiggins (14.1 points) is pulling down 5.8 rebounds a game. Forward Donta Scott (11.0 points) is the third Maryland player scoring in double figures.

Defensively, they have not allowed more than 66 points in any of their last five games win or lose. Maryland’s points-allowed average this season is 64.5 points. 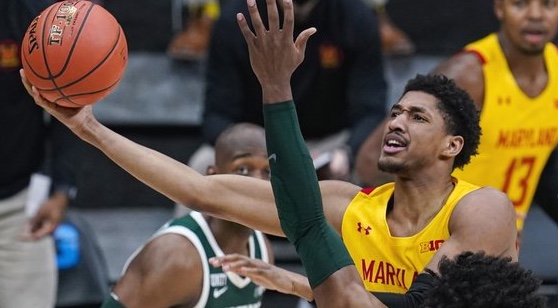 Aaron Wiggins and the Maryland Terrapins defeated Michigan State in Round 1 of the Big Ten Tournament, 68-57. (AP)

Late season losses to Illinois and Michigan State slowed down some of Michigan’s momentum as a possible No. 1 seed for the NCAA Tournament. This makes the motivation to win this tournament all the more higher.

Center Hunter Dickinson ended the regular season averaging a team-high 14.3 points and 7.7 rebounds a game. Forward Isaiah Livers was next on the list with 13.7 points and 6.1 rebounds. The team’s top shooter was guard Franz Wagner (12.9 points) with a 50.2 shooting percentage from the field. He shot 39.2% from three-point range.

The Wolverines scored an average of 76.5 points per game while shooting 48.8% from the field. This number dropped to 38.6% from outside the three-point line. They also pulled down an average of 37.8 total rebounds.

Michigan did give up 70 points or more in those two losses down the stretch. However, its points-allowed average on the season was still a solid 65.2.

Maryland is the best of the rest in the Big Ten but it is no match for Michigan with so much on the line. The first two games between these two were never that close and there is nothing that tells me the Terrapins can keep the final score closer than the current 8.5-point spread.

The best bet in this matchup could be the UNDER on the 133-point total line. Maryland has ramped up its defensive effort lately and that is the only way it can keep things from getting out of hand in this game. Michigan should have no problem keeping the Terrapins from reaching their scoring average