Picking a winner is very difficult here, as both schools cover the spread well. Oregon State is on a rampage however, leaving elite teams such as Oklahoma State, Tennessee and the entire top-half of the Pac-12 in their dust. Oregon State has been a walking piggybank the last few months, so if you must pick a winner then lean with the Beavers covering - although I think a PUSH is likely.

Houston has gone UNDER the point total in two straight games, but now face the hottest team in March Madness with an underrated offense. Oregon State has a solid big man, two terrific guards and three-point shooters. So although the Cougars defense is the best remaining in March Madness, it's likely both schools touch 63-65 points in this one.

Instead of beating your head against the wall, trying to research trends and statistics for which team will cover, simply move to another market. The point total market offers the most conviction in this game, as both schools tend to go OVER the total more times than not. Even Houston, with the second-best defense in the nation, has gone OVER the point total in nine of its last 14 games.

The given point total is low enough to consider both schools eclipsing the 60-point mark, as Oregon State's offense seemed to be fine against the nation's best defense in Loyola-Chicago.

What's often overlooked with Oregon State is their strength of schedule. Through the Sweet 16, Oregon State has found itself with the nation's 11th-most difficult schedule. Yet, they're still standing and covering games in overly convincing fashion.

The most important stat for Oregon State, that is often forgotten, is their ability to hit free throws. The Beavers rank 29th nationally in free-throw percentage (76.8%), while making 14.9 per game (ranks 53rd in nation). Their ability to find the open man (14.6 assists per game ranks 86th) and hit the three-pointer (35.6% ranks 80th in nation) makes them very dangerous.

Ethan Thompson and Jarod Lucas are the main catalysts for this offense, and the stats above. However, the Beavers are now holding teams to just 67.7 points per game, allowing no more than 70 over its last five games while scoring 70 points or more in five of their last six games.

The nation's most efficient team is still in March Madness, as the Cougars enter their Elite Eight encounter with the fifth-most efficient offense and the second-most efficient defense. They are also allowing just 57.5 points per game, holding Syracuse (who entered the Sweet 16 hitting more three-pointers than any tournament team) to under 50.

The offensive rebounding ability for Houston is what makes this team truly dangerous, 14.2 per game which ranks third nationally. It's been on full display too, as Houston is quite reliant on the second-chance points. Three players average a double-digit point total, one of which is playing with only one hip.

This team also has experience, featuring three upperclassmen in their top four scoring along with their senior leader having deep run tournament experience already. Oh yeah, Houston also has one of the most underrated coaches in college basketball Kelvin Sampson on the sidelines.

Quentin Grimes, Marcus Sasser, Justin Gorham or Tramon Mark - pick your poison. These four players are electric in various ways, the first two being scorers and the last two being big men who can score and grab boards.

The most important name for Houston, though, is senior leader Dejon Jarreau. The guts this kid showed against Rutgers was heroic, now entering the Elite Eight with a hobbled hip but still playing like a stud. He only scored nine against Syracuse, but had eight rebounds and eight assists while collecting 17 points against Rutgers. 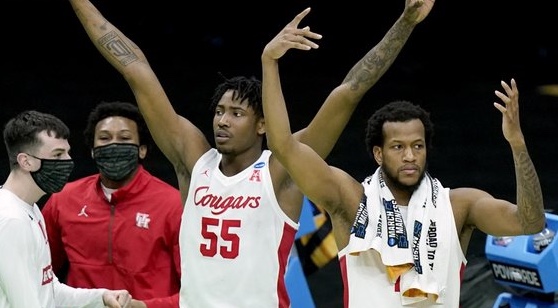 The Cougars have covered the spread 21 times this season, but now face a team that has also covered 21 games. (AP)