Ole Miss enters its second season under head coach Matt Luke looking to improve on last year’s 6-6 straight-up record and 5-7 against-the-spread mark. This will be last year of probation for the Rebels, who can’t go to the SEC Championship Game or a bowl for a third straight year.

Therefore, many view Ole Miss as a non-factor for one more campaign. However, it says here that the Rebels have enough talent to play spoilers in the race to win both SEC divisions. They return eight starters on offense and seven on defense.

Most of that talent is on offense. This unit has at least a pair of future first-round picks in offensive tackle Greg Little and wide receiver A.J. Brown. Mel Kiper Jr.’s first Big Board for the 2019 Draft had Brown listed as the No. 4 overall pick with Little at No. 6.

Brown is the leader of a WR group that’s ranked No. 1 in the nation by most preseason publications, including Phil Steele’s. The junior was a second-team All-American as a true sophomore in 2017, hauling in 75 receptions for 1,252 yards and 11 touchdowns.

There are two more elite wideouts in D.K. Metcalf and DaMarkus Lodge, who had 41 catches for 698 yards and seven TDs last year. Metcalf started all 12 games in 2017, making 39 receptions for 646 yards and seven TDs, including the game-winner in the final seconds of a 37-34 victory at Kentucky.

Former QB Shea Patterson transferred to Michigan. The former five-star recruit from Texas went down with a torn ACL in a 40-24 home loss to LSU last October. Jordan Ta’amu started the last five games and distinguished himself extremely well. The senior who came to Oxford via the juco route completed 66.5 percent of his throws for 1,682 yards with an 11/4 touchdown-to-interception ratio.

Luke also has found the QB of the future in 5-star recruit Matt Corral, a California native that arrived on campus in January and took part in spring practice. Corral was originally a Florida commit before Jim McElwain was fired and replaced by Dan Mullen.

In Steele’s preseason mag, junior tight end Dawson Knox is listed as a third-team All-SEC pick. Knox had had 24 catches for 321 yards in ’17. Brown and Little are first-team All-SEC selections, while Metcalf is a second-teamer and OG Javon Patterson joins Knox as a third-teamer.

Ole Miss averaged 32.8 points per game under first-year offensive coordinator Phil Longo, who was hired by former HC Hugh Freeze before his dismissal last summer. Longo had previously been OC in ’16 at Sam Houston State running an ‘Air Raid’ attack.

Steele ranks the Rebels’ offensive line as the fourth-best in the SEC and the nation’s 17th-best. However, the RBs are 13th in the conference. Juco transfer RB Scottie Phillips was in for the spring and may end up as the starter. Jordan Wilkins has departed after rushing for 1,039 yards and nine TDs with a 6.5 yards-per-carry average.

As bullish as I am on the Ole Miss offense, I’m equally down on the defense, if not more so. This unit allowed 34.6 PPP in ’17. The Rebels lost their two leading tacklers and one of the SEC’s best pass rushers in Marquis Haynes, who had 7.5 sacks and five QB hurries last season. (Of course, Haynes is the stud that blindsided Alabama QB Jalen Hurts in Oxford two years ago with as perfect a hit on a QB as you’ll ever see, resulting in a scoop-and-score TD that gave Ole Miss a 24-3 lead. Alas, the Crimson Tide rallied for a 48-43 win to avoid a third straight loss to the Rebels.)

Steele’s SEC Unit Rankings reflect the challenges that second-year DC Wesley McGriff (co-DC at Auburn in ’16) faces. The defensive line is ranked 12th in the league, the LBs are 14th and the secondary is seventh.

Luke hit the juco trail with hopes of adding immediate help on this side of the ball. Two defensive linemen were added in Noah Jefferson and Hal Northern. Jefferson and juco LB Vernon Dasher arrived early for spring practice and Dasher is probably going to start right away.

Before looking at this year’s schedule, let’s rewind what went down in ’17. Remember, Luke replaced Freeze on an interim basis. Ole Miss started 2-0 with lopsided home victories over South Alabama (47-27) and UT-Martin (45-23), only to lose three straight road games by double-digit margins. The Rebels stopped the bleeding with a 57-35 home win over Vanderbilt to get back to .500.

Then Patterson went down in the home loss to 24th-ranked LSU. From there, Ole Miss finished 3-2 in Ta’amu’s five starts, including a 31-28 win at Mississippi State as a 15-point underdog in the Egg Bowl. This victory convinced AD Ross Bjork to give Luke the HC gig on a permanent basis.

Both defeats down the stretch were one-possession games, as the Rebels lost home games to Arkansas (38-37) and Texas A&M (31-24). They averaged 35.8 PPG with Ta’amu under center.

Luke’s squad opens the year with a tone-setting showdown with Texas Tech in Houston. As of Aug. 8, most books had the Red Raiders installed as 1.5 or two-point favorites. The other non-conference games are at home vs. Southern Illinois, Kent State and ULM.

Ole Miss draws South Carolina and Vanderbilt as its games against the SEC East. The Rebels will be in a favorable spot for a Nov. 3 home game vs. the Gamecocks, who will come to Oxford in a potential look-ahead situation (depending on the SEC East standings at the time, obviously) with a game at Florida on deck. Most important, Ole Miss has two weeks to prepare for Will Muschamp’s squad, which hosts Tennessee the prior weekend.

The spoiler role I noted earlier in both divisions is clearly referencing South Carolina in how Ole Miss can impact the race in the East. Although we don’t give the Rebels a shot against Alabama, they could give Auburn and Mississippi State trouble, especially with both of those contests at Vaught-Hemingway Stadium.

I’m going to pass on Ole Miss’s season win total due to my lack of faith in its defense. With that said, I do believe the Rebels will win at least six games. They might wreak havoc on South Carolina’s season in early November. If Luke’s squad can win the turnover battle in home games vs. Auburn and Mississippi State, it could pull upsets in those home outings as well.

-- Ole Miss finished 2017 minus five in turnover margin. The Rebels were +34 on their 12 foes in total offense.

-- Steele ranks the Rebels’ schedule as the 46th-toughest nationally, which is the SEC’s eighth-toughest slate.

-- Steele’s National Unit Rankings has the Rebels at No. 27 in the secondary.

-- Not one team on Ole Miss’s schedule has an open date beforehand. The regular-season finale vs. MSU falls on Thanksgiving Day. 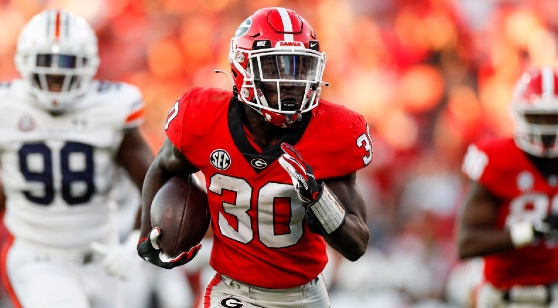