The disastrous Mike Locksley era might be primed to reach new lows for the Maryland Terrapins in 2020.

Maryland at least had Rutgers to keep the Terps out of the cellar of the Big Ten last season, but the Terrapins might just be the worst team in the Big Ten this year after the Scarlet Knights’ upset of Michigan State last week.

They will play their first home game against the Minnesota Golden Gophers this week, and the oddsmakers aren’t optimistic about their chances.

The Terrapins were blasted in their season opener last week. Northwestern hammered Maryland 43-3 as everything went wrong for the Terrapins.

Taulia Tagovailoa averaged less than 4.0 YPA and threw three interceptions, while the defense allowed the Wildcats to run for 325 yards and four touchdowns.

It was Maryland’s fifth loss by 40 points or more in their last ten conference games, and Locksley is now 1-9 in Big Ten play since becoming the head coach.

Minnesota had its sights set on winning back the Little Brown Jug against Michigan last week, but the Wolverines had other ideas. Michigan beat Minnesota for the 25th time in the last 27 meetings, routing the Golden Gophers 49-24 in the Twin Cities.

P.J. Fleck is a master motivator though, and he should have this team ready to “Row the Boat” after the loss.

Morgan completed 66 percent of his passes for over 3,200 yards with 30 touchdowns and seven interceptions last season. He no longer has Tyler Johnson, but Rashod Bateman was a preseason all-Big Ten selection and was one of the few bright spots against Michigan with nine receptions for 101 yards.

The only other player to catch more than two passes was running back Mohamed Ibrahim, but Chris Autman-Bell should be more of a factor against Maryland due to his speed.

Ibrahim was able to rip off nice chunks of yardage against the Wolverines, and he figures to have a big day against the Terrapins too. He ran 26 times for 140 yards and two touchdowns last week, building on what we saw out of Ibrahim in the Outback Bowl against Auburn. This offensive line is much better at run blocking than pass blocking, so that could lead to more work for the run game.

The Golden Gophers have two solid cornerbacks in Benjamin St-Juste and Coney Durr. However, we knew this front seven had some major holes to fill, and we saw that last week against Michigan. The Terrapins don’t have near the same talent along the offensive line, but Minnesota could have some trouble stopping the run on Friday night. 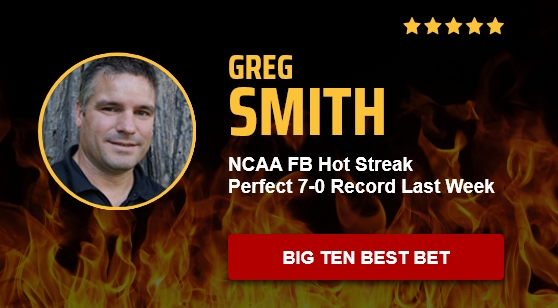 Maryland’s loss to Northwestern was its worst defeat in a season opener in 128 years. That has led to a litany of questions this week, like whether Lance LeGendre would be a better fit for the Terps under center. Tagovailoa and LeGendre battled for the starting job throughout the summer, but Locksley confirmed that Tagovailoa is still the team’s No. 1 quarterback earlier in the week.

Tagovailoa was originally at Alabama with his older brother Tua, but he made the decision to transfer in May. He was recruited by Locksley when the head coach was an assistant under Nick Saban, so he always had a little bit of a leg up in the quarterback competition. Tagovailoa must perform better after completing just 14 of 25 passes for 94 yards last week though.

The ground game did have a little bit of success against Northwestern, so the Terrapins are likely to keep the ball on the ground more often this week against Minnesota. If you take out sack yardage, Maryland ran the ball 18 times for 80 yards as Jake Funk, Peny Boone, and Isaiah Jacobs all had a run of at least 10 yards.

This offense is very young, so more growing pains are expected. There are only two seniors starting on this side of the ball, and the Terrapins didn’t have much time to install their offense due to COVID-19.

Locksley has gone with a youth movement on the defensive side of the ball too, explaining some of the problems we saw last week. Only one senior is starting right now, while a whopping six sophomores (and four transfers) are in the starting lineup. Chance Campbell flew around the field with 14 tackles and 1.5 TFL against Northwestern.

This is just the sixth meeting between these two schools, and Minnesota and Maryland only played once before the Terrapins joined the Big Ten earlier this decade.

These programs have split their four meetings over the last four years with three of the four games being decided by 21 points or more.

Minnesota obliterated Maryland in TCF Bank Stadium last year. The Terrapins had just 210 total yards of offense on the afternoon, while the Golden Gophers ran wild on the ground. Minnesota ran the ball 54 times for 321 yards and four touchdowns in a 52-10 beatdown.