The Coastal Carolina Chanticleers were supposed to host Liberty with the College Gameday crew in Conway this week, but COVID-19 scuttled those plans. That opened the door for an even more intriguing matchup though, as the BYU Cougars agreed to travel cross country to take on the Chanticleers on Thursday.

BYU is desperate for a victory that will earn the program some needed respect in the eyes of the College Football Playoff Selection Committee.

How to Handicap BYU vs. Coastal Carolina

It’s been a magical season for the Chanticleers. The program only recently made the jump to FBS in 2017. Coastal Carolina’s best finish prior to this year was back-to-back 5-7 seasons in 2018 and 2019, so the school is in uncharted territory.

Coastal Carolina is 7-0-1 ATS against FBS opponents. The Chanticleers’ lone ATS loss came against FCS-school Campbell back in mid-September. They have netted their bettors a small fortune, as Coastal Carolina is 9-0 despite being an underdog in three games and a favorite of under four points in three other games.

BYU has been on a rampage. The Cougars haven’t played the toughest schedule, but they have showcased their dominance by beating all but one opponent by at least 17 points. This offense has exploded for at least 41 points in eight of nine games, leading to four of the last five games going OVER the total. BYU has not faced an FBS-opponent since beating shorthanded Boise State 51-17 on Nov. 6. 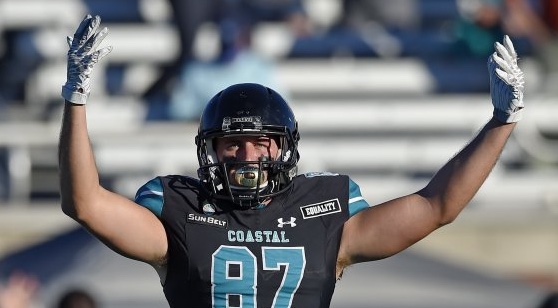 Zach Wilson won’t win the Heisman Trophy, but he might be one of the finalists for the top individual honor in college football. He has bounced back from a subpar sophomore season with a fabulous junior campaign. Wilson is completing 74.3% of his passes for 11.5 YPA with 26 touchdowns and two interceptions. His mobility is underrated, and he has likely made himself into a first-round pick in the 2021 NFL Draft if he decides to leave Provo early.

Wilson’s play is the main reason that BYU is ranked seventh in offensive SP+. The Cougars have two receivers that might end the season with over 1,000 yards in Dax Milne and Gunner Romney. Milne has 49 receptions for 906 yards and six touchdowns, while Romney is a little more of a big play threat with 34 receptions for 708 yards and two scores.

Tight end Issac Rex is a popular target in the red zone with 24 receptions for 271 yards and eight TDs. The gaudy passing numbers have led to Wilson getting a lot of attention. However, BYU has run the ball extremely well too. The Cougars churned out 213 rushing yards against Boise State in their most impressive victory of the season. Tyler Allgeier is the leading running back with 851 yards (7.2 YPC) and 11 touchdowns, and Lopini Katoa returned from injury two weeks ago against North Alabama. Katoa is questionable to play in this game though.

BYU’s defense has looked great under Kalani Sitake this season. The Cougars are ranked 17th in defensive SP+. They are in the top five in both scoring defense (13.9 PPG) and total defense (285 YPG), but Boise State was on its fourth-string quarterback when these teams met earlier in the season. None of their other opponents have been particularly impressive, as BYU hasn’t faced another quality foe in its reworked schedule.

Coastal Carolina has the 19th-best offense in the nation per SP+. Grayson McCall is completing 67.2% of his passes for 10.0 YPA with 20 touchdowns against just one interception. This run-heavy scheme has given him plenty of chances to succeed off play action. The offensive line has kept him upright too, with just seven sacks through nine games.

That offensive line has paved the way for a great run game to wear down opponents. McCall has shown off his athleticism by running for 365 yards and five touchdowns, while C.J. Marable, Reese White, and Shermari Jones are all running for over 5.0 YPC. The Chanticleers are running for 225.6 YPG, allowing them to rank eighth nationally in time of possession.

When this offense asks McCall to make a play in the passing game, Jaivon Heiligh is his top target. Heiligh was recently added to the Biletnikoff Award Watch List. He has 41 receptions for 682 yards and eight touchdowns, leading the Chanticleers in each of those three categories. Marable has been a red zone threat with six touchdowns on his 24 receptions, while tight end Isaiah Likely has the athleticism to make some big plays with 24.9 YPR.

The Chanticleers’ defense is ranked 48th in defensive SP+. This front seven has been above average, allowing 4.1 YPC. The secondary has taken advantage of Coastal Carolina’s leads to rank among the top 15 teams nationally in interceptions and sacks. Tarron Jackson leads the Chants with 8.5 sacks, and Derick Bush’s five interceptions are tied for the national lead.

This will be the first meeting between Coastal Carolina and BYU. The Chanticleers didn’t play football for the first time until the 2003 season, and they played in the Big South Conference until making the leap to the FBS in 2017.

Coastal Carolina never made it further than the quarterfinals in the FCS playoffs, so a win over BYU would be the biggest in program history.

-- BYU has gone OVER the point total in five of its last seven road games.

-- Coastal Carolina has gone OVER the point total in four straight non-conference games.