Only three current members of Conference USA have multiple conference championships. Florida Atlantic and Western Kentucky have each won two titles over the last five years, and the Marshall Thundering Herd and UAB Blazers are looking to join those other two programs with two titles this Saturday.

This will be UAB’s third straight trip to the CUSA Championship Game, while Marshall returns to this stage for the first time since 2014.

How to Handicap UAB vs. Marshall

UAB returned to the field for the first time since Halloween last week against Rice. The Blazers had lost two straight games prior to them essentially shutting down the football team throughout November and early December, so they were certainly rusty.

However, they picked up a narrow 21-16 victory over Rice that clinched the CUSA West for the Blazers.

Rice could only muster 232 total yards of offense against UAB’s defense. The Owls couldn’t get anything going on the ground, averaging under 2.0 YPC, as the Blazers had five sacks and 12 TFL.

Marshall didn’t play for three weeks prior to taking on Rice the first week of December. The Thundering Herd were 7-0 going into that game, but they suffered their first loss of the season against the Owls in a 20-0 defeat.

Grant Wells had his worst game of the season in the loss, throwing five interceptions. Rice only had 213 total yards of offense, but Marshall’s turnover woes led to an easy win for the 2-3 Owls as 24.5-point underdogs.

Johnston missed most of the season after injuring his non-throwing shoulder in mid-September. That led to freshman Bryson Lucero replacing him in the lineup. Lucero was mistake-prone, completing 54.1 percent of his passes for 6.6 YPA with seven touchdowns and eight interceptions, so head coach Bill Clark was happy to see Johnston healthy once again last week against Rice.

The junior has completed 60 percent of his passes for 7.9 YPA with five touchdowns and an interception, and he averaged 12.1 YPA against the Owls thanks to a lot of big plays.

Leading receiver Austin Watkins Jr. made the decision to opt out after Halloween in order to focus on the 2021 NFL Draft.

Myron Mitchell is now the top option with 27 receptions for 423 yards and three touchdowns, while tight end Hayden Pittman is the only other player with more than 10 receptions on the team.

UAB likes to run the ball under Clark, and they have their top running back ready to go again this week. Spencer Brown didn’t play against Rice, but he has run for at least 100 yards in five of seven games in 2020.

Brown has run for over 1,000 yards twice in his career, and he is averaging 4.7 YPC this season. Freshman home run hitter DeWayne McBride is back in action too, and he has two runs of 70 or more yards in his last three games.

The Blazers have one of the best defenses in the nation. UAB is allowing 20.7 PPG and 322.6 YPG, as the pass defense is in the top ten nationally. Opponents have only been able to convert 29.3 percent of their third downs against this unit.

Clark may be without a lot of his players for this game though. Matt Zenitz reported that UAB was down to around 40 scholarship players last week against Rice, and a slew of players are currently listed as questionable.

The defense is particularly hard hit with multiple starters in the second level on this list. 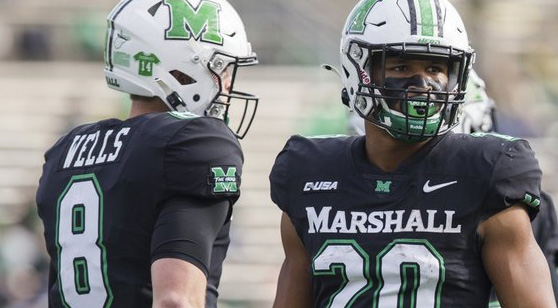 Marshall posted a 5-0 record at home this season and all of the victories came by double digits. (AP)

Wells was having a very nice season under center for Marshall prior to his disastrous performance against Rice. He is still averaging over 8.0 YPA, and Wells had a 16-4 touchdown-to-interception ratio in Marshall’s seven wins. This offensive line has done an excellent job keeping him upright, as Wells has only been sacked seven times in 234 dropbacks.

Sophomore Corey Gammage is not far behind him with 27 catches for 304 yards and four scores, but no one else on Marshall has more than 20 receptions. These receivers do stretch the field though, as nine different players have at least one reception of 40 yards or more this season.

Brenden Knox leads Marshall with 820 rushing yards (4.9 YPC) and nine touchdowns in eight games. Knox ran for at least 100 yards in five straight games earlier this season. Backup Sheldon Evans is questionable though as he didn’t play against Rice two weeks ago.

Marshall boasts one of the best defenses in the nation.

These teams met every year from 2005 to 2014, but this will be their first meeting since that stretch.

Marshall is 8-2 against UAB over its history, and the Thundering Herd have won six of those games by at least a touchdown. Meanwhile, the Blazers’ two wins were by a total of nine points.

Marshall kept its unbeaten season alive in the last game between these Conference USA teams in 2014.

The Thundering Herd were 10-0 coming into their game with the Blazers, but UAB’s defense was stout in a 23-18 loss to the visitors.

Marshall had 515 total yards in the win thanks largely to Rakeem Cato. Jordan Howard ran well for the Blazers in the loss with 168 yards and two touchdowns.

-- The under has cashed in five of the last seven games

-- The home team has covered four straight games in this series