This Saturday afternoon from Charlotte, the Clemson Tigers (9-1, 8-1) will be looking for revenge when it meets the Notre Dame Fighting Irish (10-0, 9-0) in the ACC Championship Game.

The winner of the game will capture the conference title and earn a spot in this year's College Football Playoff.

How to Handicap Clemson-Notre Dame

The Tigers are looking to get back to the college football playoffs for the sixth consecutive season. This year the Atlantic Coast Conference championship game in Charlotte serves as an unofficial play-in game for the four-team CFP field, as the Tigers are likely out with a loss, and they’re certainly in with a win. The Irish are unbeaten, so a win and they’re in, but a loss and they’re not necessarily eliminated.

Clemson was in good shape for most of the season, avoiding the dreaded COVID-19 global pandemic until late October.

That’s when college football’s biggest star, quarterback Trevor Lawrence, tested positive for the virus and was forced to miss a pair of games against Boston College, and against these same Notre Dame Fighting Irish in South Bend. The Tigers came through with a 34-28 win over B.C. behind true freshman QB D.J. Uiagalelei, but they weren’t as fortunate against the Irish in what was arguably the game of the season.

The Tigers have won nine of their 10 games, and they haven’t lost in regulation all season. Clemson got Lawrence back for the Nov. 28 game against Pittsburgh, topping the Panthers 52-17 in Death Valley as 24-point favorites. Lawrence also hit the road to face Virginia Tech, and he helped the Tigers roll to a 45-10 win as 22-point favorites. It was the eight time in 10 outings Clemson scored 40 or more points, and they have gone for 34 or more points in each of their 10 games overall.

For the Irish, they were unbeaten, but they had a couple of close calls. Notre Dame didn’t pull away from Duke until the fourth quarter in its opener back on Sept. 12, struggling in a 27-13 win. They also weren’t terribly impressive in a 42-26 win over Florida State on Oct. 10, failing to cover a 21-point number, while struggling again in a 12-7 win over Louisville on Oct. 17.

The Irish certainly looked beatable early on, and they weren’t particularly good against some of the worst teams in the ACC. Things turned around in Pittsburgh of all places. They beat Pitt 45-3 on Oct. 24, and they won five of the final six by at least 14 points, with the Clemson game the only exception.

Clemson has appeared in five straight ACC title games, winning each of them, while covering in four of the outings. The last time they didn’t cover was when the game was moved to Orlando in 2016, and they scraped by Virginia Tech 42-35. The past five title games for Clemson in Charlotte has seen the Tigers win and cover in each outing.

Let’s call BoA Stadium “Death Valley North”. However, Notre Dame figures to give them its best test yet.

Lawrence missed the Clemson game, and two games overall, but the Heisman hopeful still managed 2,431 passing yards with 20 touchdowns and just three interceptions across eight games, and Lawrence ended up finding the end zone with his feet five times.

When Lawrence wasn’t slinging the ball it was running back Travis Etienne running hard. He had 758 yards on the ground with 12 touchdowns and 5.1 yards per attempt, and he also has good hands out of the backfield, posting 512 yards on 41 catches with two scores. His 41 grabs were tied for second on the team, and his receiving yardage was third.

Camping under Lawrence’s passes is the newest sensation, wide receiver Amari Rodgers. He has the make-up of former Clemson greats DeAndre Hopkins, Sammy Watkins and Mike Williams, looking like the next big thing in the Upstate. WR Cornell Powell was a nice secondary option in the pass game, going for 684 yard and five scores with 16.7 yards per reception.

On the defensive side of the ball, safety Nolan Turner was good for a team-best 33 tackles with three interceptions, which was also a team best. Linebacker Baylon Spector went for 30 solo stops with a team-best 3.5 sacks and a forced fumble in 10 games, but the Tigers didn’t have the high-impact player like in past years.

Still, they allowed just 302.0 total yards per game to rank seventh in the country, they were 11th in the nation against the run with only 105.4 yards per game allowed, and they yielded just 18.3 PPG to rank 15th. 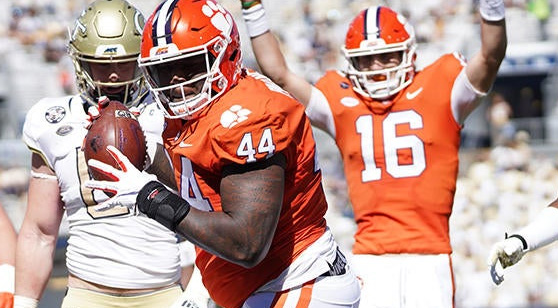 The Clemson Tigers will be looking to win their sixth straight ACC Championship when it meets Notre Dame on Saturday. (AP)

The Irish ended up going 3-1 ATS in the final four games, going for 31 or more points in each of their final six regular-season games. QB Ian Book was masterful at times, throwing for 2,381 yards, 15 touchdowns and just two interceptions while completing 63.3 percent of his pass attempts, while also scampering for 465 yards and eight scores on the ground. His rushing yardage and scores were each second on the team, and he averaged 5.1 yards every time he pulled it down and took off.

RB Kyren Williams was the top back for the Irish, running for 1,011 yards with 12 touchdowns in his 10 games, averaging 5.6 yards per attempt. RB Chris Tyree was good for 459 yards and three touchdowns in his 10 games, and he and Williams really stepped up with RB C’Bo Flemister suffering a leg injury late in the second. Flemister still ended up with 303 yards and five scores in his second games. He is questionable for this one.

At receiver, Javon McKinley led the club with 37 receptions, 660 yards and three touchdowns while averaging a team-best 17.8 yards per catch. WR Ben Skowronek was solid in his seven appearances, going for 344 yards and five touchdowns.

Defensive lineman Adetokunbo Ogundeji racked up 13 solo tackles with a team-best 5.5 sacks and a forced fumble, while combining with DL Isaiah Foskey, who was good for 4.5 sacks with 10 solo stops in his eight contests. Defensive back Kyle Hamilton led the club with a team-high 39 tackles with four passes defensed across nine outings.

The Irish won a thrilling 47-40 double-overtime game on Nov. 7 in South Bend, a game which was a seesaw affair. Williams opened the day with a 65-yard touchdown run just 33 seconds in to give Notre Dame an early lead. Uiagalelei hit Powell for a 53-yard score to cut the Notre Dame lead to 10-7. At halftime, the Irish were up 23-13, and things were looking very good for the home side.

The third quarter was all Clemson, however, as they outscored the Irish 10-0 to tie it up 23-23. The teams also tied 10-10 in the fourth, as regulation wasn’t enough to decide it.

Uigalelei ran it in from 1-yard out to give Clemson a 40-33 lead in the first overtime, but Williams was back in the end zone to force a second extra session. Williams scored again from three yards out, and the Irish defense held, as Notre Dame won 47-40 and the Irish kids spilled onto the field. That was one of the most controversial situations involving fans, COVID-19, etc.

-- Notre Dame has cashed in six straight against the number against teams with a winning record, and they’re 5-1 ATS in the past six at a neutral site.