Wednesday's College Football bowl action will conclude in Alabama as the Memphis Tigers (7-3, 5-3 AAC) square off with the Florida Atlantic Owls (5-3, 4-2 C-USA) in the inaugural Montgomery Bowl.

FAU will be looking to remain perfect in bowl postseason matchups after winnings its first four contests while Memphis is looking to capture its first bowl victory dating back to 2014.

The Tigers won seven of their 10 games to date, including a 30-27 win over Houston last time out as a seven-point underdog on Dec. 12 in the regular-season finale.

While the Tigers were a high-octane offense for most of the season, the Under actually connected in each of their final three games down the stretch.

Away from home the Tigers were a dismal 1-3 SU and 0-4 ATS, so that’s something to consider when handicapping this game.

Memphis did toss up 27 or more points in seven of their 10 games overall, and they yielded at least 24 points in eight of their outings, so the scoreboard operator usually has to be on their toes when the Tigers are in town.

FAU took a different path to its 5-3 record.

They started off fine, posting a 5-1 SU mark in the first six games, but they sputtered down the stretch.

The Owls fell 20-3 on the road to Georgia Southern on Dec. 5, and with a five-day turnaround at Southern Miss they were dropped 45-31 in Hattiesburg on Dec. 10.

FAU, like Memphis, was a dismal 1-3 SU on the road, and they ended up going 2-2 ATS. The ‘under’ connected in the first four games for FAU, and six of eight games overall.

The Lane Train moved on to Ole Miss last offseason, and the Owls hired Willie Taggart to try and keep the success going. That he did, despite some growing pains on offense.

However, FAU’s defense was sturdy for most of the season, allowing 20 or fewer points in all but the final game against Southern Miss. In three outings the D did not allow a touchdown.

Quarterback Javion Posey took the reins of the offense about halfway through the season, and he ended up with 390 passing yards, two touchdowns and three interceptions across parts of five games.

He also led the team with 401 yards and three scores, so he is a dual-threat option. QB Nick Tronti might still see some time. He is more of a traditional quarterback, and he completed 54.1 percent of his passes for 759 yards, five scores and two picks while running for two touchdowns.

The run game was rather stagnant for most of the season, with James Charles the best of the lot among the backs with 347 yards and four touchdowns to lead the Owls. Malcolm Davidson averaged 7.1 yards per outing with 298 yards and two touchdowns over six outings.

T.J. Chase led the squad with a mere 322 receiving yards and one score, and Brandon Robinson was tops with just three receiving scores. 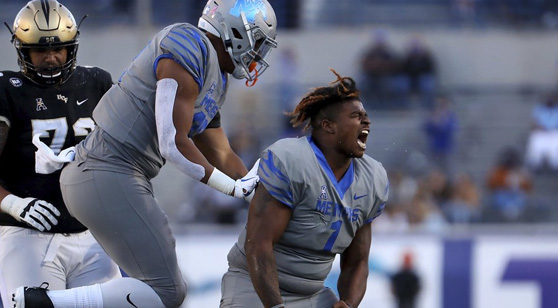 The Memphis Tigers defensive unit struggled at times this season but they made big plays when needed. (AP)

The Tigers ranked 25th in the nation with 452.3 total yards per game while ranking 17th in the country with 310.3 passing yards per outing.

Their Achilles’ heel, if you want to call it that, was their ground game, posting just 142.0 yards per game to rank 85th overall.

Despite the unbalanced offense, Memphis still went for 31.6 PPG to check in 43rd.

QB Brady White completed 60.1 percent of his passes for 3,096 yards, 28 touchdowns and nine interceptions in his 10 games, while running for two more touchdowns.

The two rushing scores actually tied a team best, which shows you how little of emphasis Memphis puts on the ground game.

Defensively, Memphis allowed 448.7 total yards per game, including 303.0 passing yards per game to check in a dismal 122nd. They were decent against the run, ranking 45th, while ranking a so-so 67th with 29.7 PPG.

These teams met in the 2007 New Orleans Bowl, with Howard Schnellenberger’s Owls posting a 44-27 behind QB Rusty Smith at the Louisiana Superdome in its first-ever bowl appearance.

Memphis went 3-0 SU in its first three bowl appearances, but they’re just 2-8 SU across the past 10, including a five-game bowl losing streak.

They were on the short end against Penn State last season in the Cotton Bowl Classic, falling 53-39.

FAU will be making its fifth-ever bowl appearance, and they’re 4-0 SU all-time.

Only Appalachian State, now 6-0 SU, has a better winning percentage with a minimum of four postseason appearances.

The Owls won the Boca Raton Bowl in 2017 and 2019, the Motor City Bowl in 2008, and the New Orleans Bowl against the Tigers. FAU has scored 44 or more points in three of its four bowl showings.

-- They’re also 0-5 ATS in the past five bowl appearances.

-- FAU is a perfect 4-0 ATS in the past four bowl games, and 7-1 ATS in the previous eight against teams with a winning record.

-- However, the Owls managed to cover just one of the final five games down the stretch.