One of the biggest injustices of the college football season was righted rather quickly as the Army Black Knights replaced the Tennessee Volunteers in the Liberty Bowl.

Tennessee backed out due to an uptick in COVID-19 cases last week, leaving Army to find a home for bowl season after initially being snubbed despite a 9-2 record.

The Black Knights will face the West Virginia Mountaineers, who are favored to beat them by a touchdown on somewhat short notice.

How to Handicap West Virginia vs. Army

The Mountaineers ended up being one of the most predictable teams in the country. West Virginia went 5-0 at home and 0-4 on the road in 2020.

They covered the number in each of their home games, blowing out Eastern Kentucky, Kansas, Kansas State, and TCU, and they nipped Baylor as a short underdog in Morgantown.

However, this team looked much worse on the road although they nearly knocked off Texas in Austin.

WVU closed out the regular season with a 42-6 blowout loss in Ames to Iowa State. The Mountaineers were behind 35-0 at the start of the fourth quarter as quarterback Brock Purdy torched this defense.

QB Jarret Doege put up some numbers late for West Virginia in the loss, but the game was fully out of reach at that point. That ended up being WVU’s season finale as the Mountaineers had to cancel their game with Oklahoma the following week.

Army did not fare well against AAC teams this season.

The Black Knights could only muster 22 combined points against Cincinnati and Tulane, and they lost both games by two touchdowns. However, Army went 8-0 against teams outside the AAC, largely blowing out the opponents on their patchwork schedule.

The Commander-in-Chief’s Trophy was the most important reward for Army this year.

The Black Knights shut out Navy 15-0 two weeks ago to beat their arch-rival, and they followed that up with a 10-7 win over Air Force the following week. That allowed Army to keep inter-service bragging rights for one more season. 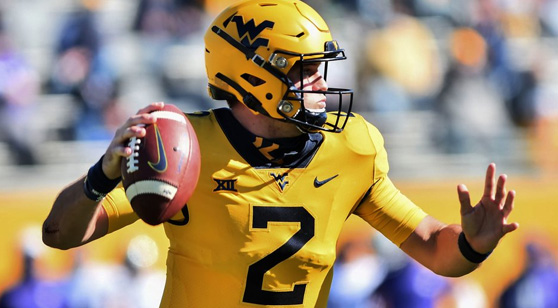 WVU quarterback Jarret Doege has shown flashes this season but he has struggled outside of Morgantown. (AP)

This isn’t a great offense.

West Virginia is only producing 23.1 PPG and 397.5 YPG in its second season under head coach Neal Brown.

Bowling Green transfer Jarret Doege put up some decent numbers this season, completing 64.2 percent of his passes for 2,428 yards with 13 touchdowns and three interceptions, but he had substantially different home/road splits.

Doege only threw two touchdowns away from Morgantown, and almost half of his touchdown passes came against either FCS Eastern Kentucky or Kansas.

Two of WVU’s top four receivers might not be available on Thursday afternoon.

Sam James and Bryce Ford-Wheaton are dealing with undisclosed injuries. That will leave Doege even more dependent on Winston Wright Jr. and T.J. Simmons.

Wright leads the team with 45 receptions for 528 yards and two touchdowns, while Simmons is a deep ball threat averaging 18.2 YPR.

Running back Leddie Brown is 55 yards away from 1,000 on the year. He has thrived in West Virginia’s wins, running for over 100 yards in four of the Mountaineers’ five victories, while he was held to 4.0 YPC or less in each of WVU’s four losses. Brown is the centerpiece of this ground game, but WVU is averaging just 3.5 YPC and 122.5 YPG as a team. That puts the Mountaineers outside the top 100.

The Mountaineers have been one of the best defenses in the nation this year, especially considering they play in the Big 12.

West Virginia is sixth in total defense (308.6 YPG), and the pass defense is superb. This secondary is allowing just 6.1 YPA and 176.0 YPG through the air.

That has WVU’s defense ranked 15th in Bill Connelly’s SP+.

Unfortunately, the Mountaineers won’t have their best player though as defensive lineman Darius Stills opted out of this bowl game.

Despite playing 11 games, Army is a bit of an unknown this year.

The Black Knights won nine games, but three of those wins came against FCS opponents. It’s always tough to judge triple option teams too based on the uniqueness of the offense.

Tyler has taken over as Army’s starting quarterback as he has been a more dynamic runner than the other options at quarterback. He isn’t much of a passer, throwing just four times this year, but he has 502 rushing yards (4.4 YPC), and he consistently makes the right decision on the option.

Tyler took a big hit and was relieved by Christian Anderson in their last game against Air Force, but he appears ready to re-take the field against WVU.

If the Black Knights are down, Anderson or Jemel Jones will likely take the snaps under center. Anderson and Jones are more experienced passers, and Jones is averaging 8.2 YPA this season. Army doesn’t want to fall behind though as this offense can’t overcome large deficits with its slow, methodical pace.

Army does a great job of limiting opponents’ possessions.

This is the fourth meeting between these two programs.