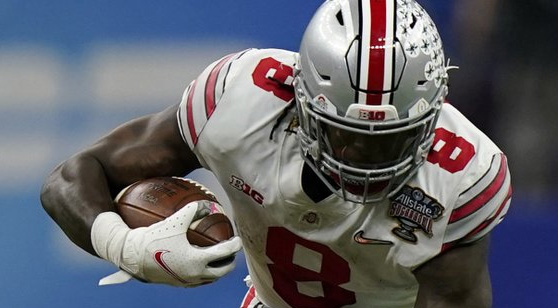 How to Handicap Ohio State vs. Alabama

Ohio State produced a spectacular performance at the Sugar Bowl in the College Football Playoff semifinals, avenging last year’s 29-23 semifinal loss to Clemson by spanking the Tigers 49-28 as a seven-point underdog. The 77 combined points elevated ‘over’ the 69-point total.

Despite suffering what appeared to be a serious injury to his ribs on a hit from Clemson senior linebacker James Skalski, Justin Fields played a game for the ages. The former five-star recruit to Georgia made up for his two interceptions in last year’s loss to Clemson – and then some!

Fields connected on 22-of-28 passes for 385 yards and six touchdowns compared to only one interception. He added 42 rushing yards on eight attempts, while senior RB Trey Sermon ran for 193 yards and one TD on 31 workmanlike carries.

Clemson scored on its first two drives to take 7-0 and 14-7 advantages. After the Tigers went up on its first TD drive, Sermon answered with a 32-yard TD scamper. When Clemson took a 14-7 lead, Fields responded by threading the needle into a tight window for an eight-yard TD pass to senior TE Luke Farrell.

That started a run of 28 unanswered points from the Buckeyes, who got three TD passes from Fields in the second quarter to take a commanding 35-14 lead into intermission. Ryan Day’s club threatened to end things early in the third quarter when it penetrated deep into the red zone on its opening possession. However, Fields made his only mistake of the night and was intercepted into the end zone.

When Clemson marched down and scored to trim the deficit to 35-21, it appeared as if the momentum was shifting. But the Buckeyes weren’t going to have any of that on a glorious night in New Orleans. Facing a third-and-10 play from its own nine with 7:01 left in the third quarter, Fields threw a check down to Sermon, who had two defenders between him and the down marker. He blasted between both of them for a first down, and it seemed evident that this wouldn’t be Clemson’s night.

Fields put an exclamation point on that notion several plays later when he found Chris Olvae for a 56-yard TD pass. Trailing 42-21 with 3:54 remaining, the Tigers advanced to OSU’s 40, but Clemson junior QB Trevor Lawrence coughed up a fumble. The Tigers forced Ohio State to punt quickly, though, and they took the ball back with 58 seconds left in the third.

At this point, Dabo Swinney’s team was in desperation mode. He had a QB with a 34-1 record in 35 games who has been a lock to be the No. 1 pick in the 2021 NFL Draft for two years and change. So what does Swinney do? He allows back-to-back running plays to be called to milk away what was left of the third quarter.

Then on fourth-and-one from its own 22, Clemson was flagged for a false start. Then it punted. Two plays later, Fields hit Jameson Williams with a 45-yard TD throw and it was over.

Day and his staff conducted an absolute clinic. His players executed at an A+ level. In exacting revenge in dominating fashion, the Buckeyes put to bed any chatter that it didn’t belong in the CFP due to their shortened schedule caused by the Big Ten’s delay of the start of the regular season.

I’m not blaming Ohio St. for it because it was a super-sweet victory, but the Buckeyes celebrated and rejoiced after taking it to the Tigers. Meanwhile, earlier that day in Arlington, TX, at the relocated Rose Bowl that was played at Jerry World, Alabama simply cruised into victory lane with an emotionless victory that wreaked of an attitude that this was merely a small bump in the road toward a bigger prize.

Alabama scored TDs on its first three drives en route to a 31-14 win over Notre Dame as a 19-point favorite in the CFP semifinals. However, Ian Book’s one-yard TD run with 56 seconds remaining hooked up supporters of the Fighting Irish with a backdoor cover. The 45 combined points dropped ‘under’ the 65.5-point total.

Bettors who backed Alabama in the first quarter (-7) and the first half (anywhere from -11 to -12 depending on when those wagers were placed) cashed winners. The Crimson Tide went ahead 14-0 on two TD passes from Mac Jones to DeVonta Smith and Jahleel Billingsley.

Notre Dame did mount a clock-consuming drive that resulted in a one-yard TD run from redshirt freshman RB Kylen Williams. The score made it 14-7 with 11:16 remaining until halftime.

Alabama quickly answered, though, as Jones found Smith again for a 34-yard scoring strike and a 21-7 lead with 8:49 remaining. After both teams traded punts, Notre Dame was able to get to Alabama’s 33 with an eight-play drive that went 56 yards. Depending on your line, the Fighting Irish were attempting a 51-yard field goal to either cover for first-half bets or make them a push.

Whatever the case, the field goal missed. Therefore, Alabama covered the number for first-half bets for the eighth time in a row to improve to 10-2 in the first half for the season. The lone non-covers came at home vs. Georgia and at Ole Miss.

Alabama extended its lead to 28-7 on a third TD pass from Jones to Smith, who scored on a first-and-goal play from the seven. After forcing a Notre Dame punt, Alabama kicker Will Reichard made a 41-yard field goal for a 31-7 advantage with 12:45 left.

Jones finished the night with 25 completions on 30 attempts for 297 yards and four TDs without an interception. Najee Harris ran for 125 yards on 15 carries, while Smith had seven catches for 130 yards and three TDs.