There is nothing better than the yearly tradition of allowing small market teams to play in these big prime-time weeknight games at the beginning of the year. With all eyes on UAB vs. Jacksonville State, we should expect these teams to play their hardest at the Cramton Bowl in Montgomery, Alabama on Wednesday night. One of the biggest advantages to being an informed sports bettor is that while the public may be easily influenced by name value and ESPN blurbs, we have the advantage of being able to sink our teeth into the one game on Wednesday's slate.

Historically, UAB is up 3-2 in previous encounters and they currently hold the advantage coming into this game as 15-point favorites. UAB will have the advantage at quarterback with Tyler Johnston III starting his third season for the Blazers. Johnson has been successful thus far, leading them to a 13-5 record along with two conference titles. The biggest thing that's been holding him back is the constant injuries he's faced the last two years, causing him to miss significant time. Zerrick Cooper will be starting at QB for Jacksonville State, missing all of last year with an injury but will likely end up breaking every single Jacksonville State QB record by the end of the year.

Let's take a look at what sets these two teams apart and why there is a 16-point spread. The answer, the offensive and defensive lines. Both of these teams are fairly even across the board with running games and passing weapons. UAB, though, has the clear line advantage returning all of their starters.

Last season, UAB’s offensive line was instrumental to jump-starting the rushing game, allowing the team to average over 200 rushing yards per game. Beyond that, in a nine-game season, they only allowed four sacks from opposing pass rushers. Jacksonville State has a solid offensive line but considering the strength of UAB’s defensive line, its gonna be a tough night. Alex Wright is a mismatch and linebacker Noah Wilder and has been impressive on tape. I think it's gonna be hard at times for Jacksonville State to keep up. I'm a firm believer that offensive and defensive lines win you games. 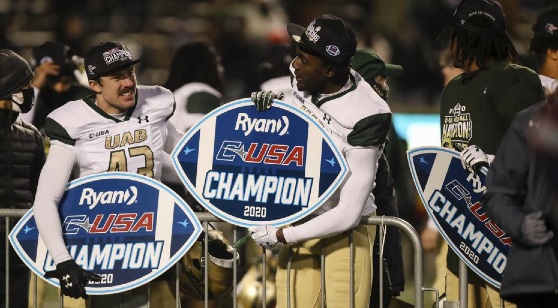 UAB looks to repeat a successful 2020 season in which it won the CUSA Championship against Marshall. (AP)

At the end of the day, a lot of these non-conference matchups end up in blowouts. I'm definitely not taking Jacksonville State for granted this year, but UAB is a tough opponent to start out the year. I predict UAB covers the spread but I don't think it will be in grand fashion. This should start out fairly close, but I think as the game goes on the talent gap will become slightly more obvious. I'm very eagr to watch this game go down in prime-time on Wednesday night, it should be a good one.