Gus Malzahn is looking to keep the good times rolling at UCF. The Knights have become one of the nation’s premier mid-major programs over the last five years. They won a share of a national championship under Scott Frost in 2017, and Josh Heupel led the program to two straight double-digit win seasons before leaving for Tennessee with AD Danny White this offseason.

Meanwhile, Boise State has a new coach of its own in former standout linebacker Andy Avalos. He was a defensive assistant for the Broncos from 2012 to 2018, and it was a natural fit to hire him when Bryan Harsin made the move to Auburn. Avalos will look to bring the Broncos back to their former glory after they have been surpassed as Americas favorite mid-major darling in recent years.

UCF should have one of the top offenses in the AAC once more with Malzahn calling the shots. The former Auburn head coach is a great fit in terms of scheme and tempo, and he has a lot of talent in this offense. Dillon Gabriel is the best quarterback the Knights have had since Blake Bortles was on campus, and the receiving corps has a lot of talent although two of the top three receivers from 2020 have left the program. Running back is the biggest concern on offense. All three of the top running backs from last season have departed, and it’s unclear whether Malzahn will choose one or go with a running back by committee situation.

The Broncos dealt with a slew of injuries and COVID cases in 2020. Four different quarterbacks saw action under center, but there is stability now that Hank Bachmeier is healthy. Bachmeier had a solid freshman season in 2019 and played well when on the field last year. He could be primed for a very good season running this offense. A healthy George Holani will mean a lot to this ground game, while Khalil Shakir could be in line for All-American honors as one of the best wide receivers in the country. 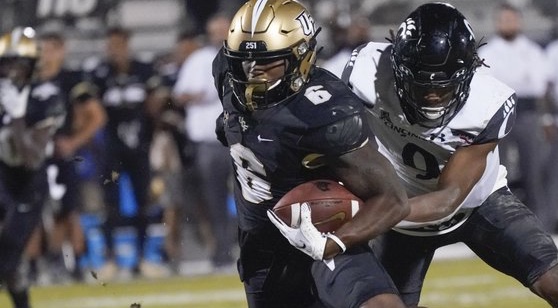 UCF has seen the underdog cover the spread in seven of its last eight home games. (AP)

Although UCF will be at home for this game, the Knights won’t have their full home field advantage. They would be better served if this was a day game so the heat could wear on Boise State, but the weather will be very accommodating.

The Broncos should be able to throw all over a young, inexperienced secondary on their way to an upset win in their season opener. UCF has lost a lot in the back end, so Shakir could have a big game.