The Mountaineers of App State are back in action, now Yosef and the faithful have to travel from the hills of Boone to Bank of America Stadium in Charlotte for this intriguing neutral-site battle. And the Pirates fans pillage their way down Interstate 40/85 to offer no quarter, rather than opening in Rowdy Dowdy.

All of those trends are well and good, but this is 2021. So what can we expect here? App State has won at least nine games in each season dating back to 2015. They have eight starters back on offense, although QB Zac Thomas is gone, and the well-traveled transfer QB Chase Brice takes over. Brice has a chance to shine, as the Mountaineers have one of the better, if not the best, receiving corps in the Sun Belt. And RB Camerun Peeples is a player to watch very carefully, as he can take it for six any time he touches the football.

The Pirates had a shaky offensive line, which was an area of focus during the offseason. They just have to better, or it is going to be a long season. If the O-line can be better, QB Holton Ahlers has a strong arm and a cadre of impressive receivers in C.J. Johnson, Audie Omotosho and Tyler Snead, so East Carolina could score with the best of them this season, but it starts up front. The defense also allowed 33.8 PPG last season, and they allowed 201.3 rushing yards per game, so that needs to improve. 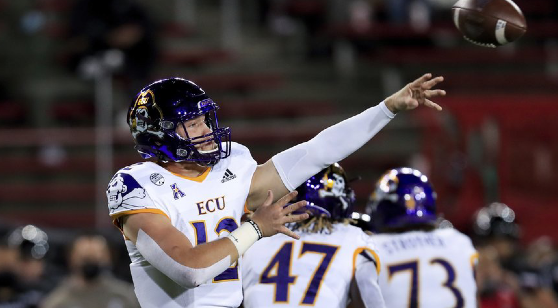 ECU has covered the spread in seven of its last eight games when facing a non-AP-ranked school at night. (AP)

The Mountaineers do not have the luxury of playing in front of their home fans, but they should have a pretty good showing with the slightly closer proximity to Charlotte. They also have the best player on the field in Peeples, and he'll be the difference maker as he shreds a very suspect East Carolina rushing defense, whittling down the D and burning the clock in the second half.

East Carolina will be able to keep this game close, especially in the first half, as Ahlers and company can score plenty of points. But it will be the same old issues for the Pirates, as the offensive line is shaky, and unless they have improved dramatically, it will keep ECU from having its quarterback operate at his optimal level. The Mountaineers also have a much more superior run game, and the Pirates really struggled to shut down the tailbacks from the opposition. Those are two key areas.

Still, with all of that doom and gloom, East Carolina still has some big-time players at the skill position spots, and they'll be able to hang with App State in a potential track meet at BoA. This is a bit of an underrated game on the opening weekend schedule, and it has the chance to be very fun to watch. The books have listed the total in this game very low, and that's great news for Over bettors.

These teams are meeting for the first time since Sept. 1, 2012, a 35-13 win by the Pirates in Greenville. While App State owns a 19-12 all-time series advantage, the Mountaineers have lost six straight meetings, and haven't topped the Pirates since 1975. And 10 of the wins for the Mountaineers came from 1932-51, so their advantage in the series is a bit misleading. However, App State has easily been the more consistent team since these teams met each other last, and most of the history can be tossed out the window.