The Wildcats will have revenge on their mind when the Spartans come calling at Ryan Field on Friday night. There weren't a lot of highlights for head coach Mel Tucker and Sparty last season, but a 29-20 win over a ranked Northwestern team as 13.5-point underdogs was definitely a bright spot. The loss for the Wildcats still did not derail them, however, and they claimed the West Division title and a ticket to the Big Ten Championship game. While they came up short against Ohio State in the league title game, they were able to earn a 35-19 bowl win over Auburn.

Northwestern heads into the season in a little bit of disarray. Head coach Pat Fitzgerald has just seven players returning from last season's West Division champion team. But the cupboard certainly isn't bare, as RB Cam Porter is one of the better tailbacks in the league, and he'll have mammoth LT Peter Skoronski to work behind. QB Ryan Hilinski, a transfer from South Carolina, lost out in the battle with QB Hunter Johnson for the starting duties. Johnson, the former Clemson Tigers recruit, will still need to be sharp to hold onto the job. But it's a nice problem for Fitzgerald, having two former Top-100 recruits in the fold.

Michigan State's defense was stout last season, holding the opposition to just 5.3 yards per play, while they checked in middle of the road in pass efficiency defense. They'll lean upon that strength to hang with the Wildcats. DE Jacub Panasiuk will also be leaned upon rather heavily to put pressure on Johnson, and perhaps Hilinski if he gets into the game.

Sparty will have difficulty putting points on the board, and the Wildcats are generally pretty good at slowing things down and making the opposition work. Michigan State has some uncertainty under center and up front, and that's not what you want to see heading into the new season. There's a reason Sparty is tabbed for last in the East Division by a lot of prognosticators. However, WRs Jalen Nailor, Jayden Reed and incoming transfer Kenneth Walker III do give Michigan State some downfield, big-play possibilities. True freshman TE Kameron Allen was a big get for Tucker, and is a potential star. 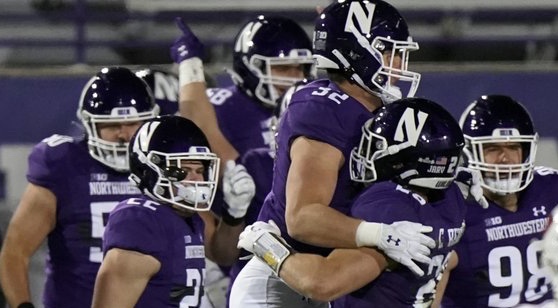 The Northwestern Wildcats have covered the spread in five straight games when playing in Illinois. (AP)

Michigan State is looking to turn over a new leaf and get better results under Tucker, but they look to be in a bit of disarray and still with several parts which need a big-time upgrade. Their best unit is the wideouts, and if they get consistent quarterback play, they might be able to hang in some games. But that's a big if.

For Sparty, facing an experienced Wildcats team isn't a dream matchup for the opener. It would've been nice to have a couple of tune-up games first before a decent test. It's a test Michigan State isn't likely to pass, although Northwestern also has some question marks of its own, and this will likely be a typical, grind-it-out, lower-scoring Wildcats kind of game. That's just the way Fitzgerald likes it, too, as they play heady offense, and good defense to lull the opposition into submission.

In this day and age of college football, you aren't going to get a lot of totals in the 40's, but with Northwestern it is likely to be a regular happening. And what's more, playing the UNDER in those type of games seems like risky business. However, it's a good bet when the Wildcats take the field, and we've seen the UNDER connect in seven of their past eight Big Ten battles. While we've seen the OVER cash in five straight meetings in this series, including last season's 29-20 win on a total of 40, it's a good bet to play the UNDER with a new quarterback in Evanston for the purple side, and a bunch of question marks for the guys in green.