The Pittsburgh Panthers (1-0) hit the road to battle the Tennessee Volunteers (1-0), and we have a rather curious line. The Panthers from the ACC opened as road favorites over the Volunteers by three and a hook.

First off, this game should be called the Johnny Majors Bowl. The late coach, who passed away in Knoxville on June 3, 2020, has a street named after him near the practice facility of the Volunteers in Knoxville. But before he was beloved in Tennessee, he coached the Pitt Panthers for four seasons in the 1970's, including a 12-0 season and Sugar Bowl championship while riding Heisman Trophy winner Tony Dorsett to an Associated Press national championship. He then moved to Tennessee in 1977, and coached for 16 seasons, winning 116 games, before returning to Pitt for four uneventful seasons in the mid-90's. So, a tip of the hat to the former coach before we get started. Know your history, kids!

Majors would have been proud of both teams last week. The Panthers opened with a 51-7 thumping of Massachusetts at Heinz Field in Pittsburgh. The Panthers covered a 38-point number against the Minutemen, while piling up 222 rushing yards and 375 passing yards. It wasn't a one-sided show, however, as the defense also came up big. Pitt allowed just 42 rushing yards and 209 total yards, sacking the quarterback five times and forcing a fumble. It wasn't all great for Pitt, as they turned it over four times, posting a minus-3 turnover differential. That's something they must clean up going forward, and a stat which makes this line all that much more curious.

For Tennessee, they got the Josh Heupel era off on the right foot with a 38-6 thrashing of Bowling Green at Neyland Stadium. They fired out to a 14-0 lead after 15 minutes, but the Falcons posted a pair of long field goals to make it just 14-6 at halftime. That's when former Michigan QB Joe Milton III came alive, as the Vols outscored the Falcons 24-0, and Milton tossed his first two touchdowns for the "Power T", and he also rushed for a score in the game.

Neither team was really tested in the opening weekend, and both teams put up some impressive totals along the way. Tennessee had 326 rushing yards, and didn't need Milton to do much through the air. One concern is Bowling Green sacking the Tennessee quarterback three times, and the Vols losing the turnover battle by a minus-3 margin. But as mentioned above, that was also a concern for the Panthers as well.

The Panthers did cover a big number last week, and they're now an impressive 7-2 ATS across the past nine non-conference games going back a few seasons. But remember, Pitt is just 2-5 ATS in the past seven road games, and a trip to Neyland Stadium is a big test, even if the Vols aren't quite what they used to be during the heyday of the aforementioned Majors, or his predecessor Philip Fulmer. This is still a rabid, loud crowd, and seeing that checkerboard end zone and over 100,000 fans can be intimidating. And while it's just 1-0, the Vols have a winning record, and the Panthers have failed to cover the past five against winning teams.

The Volunteers obviously have quite a bit of things to clean up after turning it over three times against Bowling Green. That's not going to fly against Pittsburgh, although they had turnover issues themselves. The Vols failed to cover against the Falcons, and they're just 1-4 ATS in the past five at home. But I just don't see Pittsburgh as the better team here, and think Tennessee is a tremendous value catching the three and a hook. The Vols are also worth a small-unit play straight up on the money line.

If this were last season, with the likes of Jarrett Guarantano under center for the Vols, I could understand the Panthers being favored. But Milton is a handful, and very athletic, and this game will be night and day for the Pitt defense trying to contain the dual-threat signal caller, rather than facing an overwhelmed UMass side.

I think Tennessee's defense is a bit underrated, too. Yes, they dominated one of the lower-echelon teams from the Mid-American Conference last week, they didn't exactly shut down Clemson. But who did Pitt play? They beat nobody, too. And let's face it, the ACC didn't exactly show out last week when it counted, especially against SEC foes. That also makes this line all that much more curious.

Take the Vols, and enjoy the celebratory walk to the betting window or kiosk. 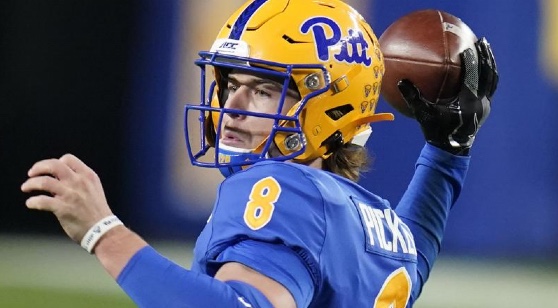