Former Big 12 rivals will square off in Mile High Stadium in Denver on Saturday when the Colorado Buffaloes face the Texas A&M Aggies in a “neutral” site game. Colorado is 6-3 all-time against Texas A&M and won the last meeting between these programs in 2009. The Aggies took a 31-21 lead deep into the fourth quarter but allowed two long touchdown drives in the last seven minutes to fall 35-34 to the Buffaloes.

These programs have moved in separate directions over the last dozen years though. While Colorado has been a middling team since joining the Pac 12, Texas A&M improved rapidly after joining the SEC.

Texas A&M is ranked No. 5 in the country coming into this game. The Aggies cruised to a comfortable 41-10 win over Kent State in their home opener, but new quarterback Haynes King struggled in his debut. King threw three interceptions, leading to the Aggies only taking a 10-3 lead into halftime. However, he calmed down in the second half and the defense helped in a big way with a pick six to take the pressure off.

Ainias Smith was King’s favorite target in the opener, catching eight passes for 100 yards and two touchdowns. Preseason All-America tight end Jalen Wydermyer didn’t have much of an impact, but the ground game established the run well. Devon Achane and Isaiah Spiller combined to carry the ball 29 times for 237 yards and two scores.

Colorado had little trouble with FCS Northern Colorado in its opener. The Buffaloes won 35-7 as Michigan transfer Dylan McCaffrey was unable to do much against CU’s defense. There are plenty of questions surrounding Colorado’s passing game after the victory though.

The Buffs ran the ball 49 times for 281 yards and four touchdowns against the Bears. Colorado needed a strong effort from the run game since Brendon Lewis wasn’t able to have a lot of success through the air. Lewis completed just 10 of 15 passes for 102 yards and a TD in the win, so there are real concerns about his ability to throw on the Aggies.

This game shouldn’t be close. While King wasn’t sharp in his debut, Jimbo Fisher is a quarterback whisperer. He will work with King this week and help him find a comfort zone for Saturday. Texas A&M’s ground game will be the real difference maker though as the Aggies should maul Colorado’s front seven. 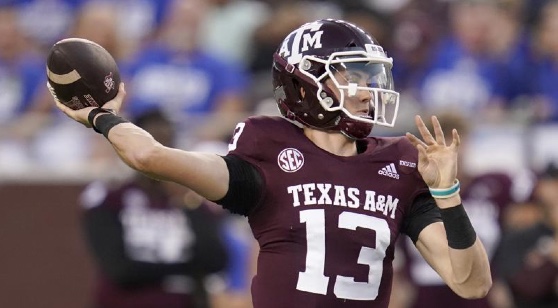