A huge Pac-12 battle is set for late Saturday night when the UCLA Bruins host the Arizona State Sun Devils. The Chip Kelly vs. Herm Edwards meeting is set to kick off at 10:30 p.m. ET and will air on FS1 from the Rose Bowl in Pasadena, California.

Expect this game to be close, with both offenses averaging over 30 points per game although the Sun Devils' defense is a bit better. Looking through all the trends the most consistent appears to be Chip Kelly's record over Herm Edwards at Arizona State. The Bruins have covered seven of their last eight games when facing the Sun Devils in Pasadena.

UCLA has also covered the spread in four straight games against Arizona State, while also covering seven of its last 10 games overall. The Sun Devils have lost eight of their last 11 games SU when playing in Pasadena. Recent trends also show that Arizona State is 1-3 ATS this season while UCLA is 3-1 vs. the spread, so there are a lot of numbers working against the Sun Devils outside of their points allowed total (ranked 21st nationally).

Just to add another stat to the mix, UCLA has covered in five straight games when facing any school from Arizona. The underdog has covered in four of the last five games between the schools however, so I'm willing to go with Chip Kelly's Bruins at home in a SU pick rather than shaving some bucks for a field goal - I expect this meeting to come down to the wire.

With that said, I have no issue supporting the point total going UNDER instead. UCLA has gone OVER in four of six, including four of its last five in the Rose Bowl. However, Arizona State is 1-3 on the O/U this season and the UNDER has cashed for bettors in four of the last six meetings. Arizona State, backed with a solid defense, has gone UNDER the point total in six of its last seven games when facing an AP-ranked opponent.

This offense begins with quarterback Jayden Daniels, who was an early Heisman contender but since has faded from the list of contenders. It's been a rough season for Daniels so far, with only two TDs and three INTs. He does have a completion percentage over 70% however, and also averages 6.9 yards per carry to go along with two rushing TDs. He will need to step up overall for a road upset against a good UCLA team.

The aerial attack is scattered for the Sun Devils, with four different receivers over 100 yards and each averaging a minimum of 12.8 yards per catch. LV Bunkley-Shelton leads the receivers in catches and yards, but Curtis Hodges and Andre Johnson are just as dangerous and often forgotten.

Johnny Wilson rounds out a solid receiving core, while the Sun Devils backfield has three 200+ yard rushers including Daniels. Rachaad White leads the ground game for Arizona State, with 4.7 yards per carry on 55 touches and six TDs. Edwards loves getting him the ball in space - as White leads the entire offense in receptions (20) and yards.

The Arizona State defense is a good one to watch, but don't force a lot of fumbles despite notching five total interceptions this season. Darien Butler leads the team with two of those interceptions and also has a team-high 27 total tackles and two sacks. This defense should be able to keep the game close, but the conviction that Daniels wins on the road has yet to be earned based on his recent play. Expect Edwards to lean on his defense in this game, which should lead to an UNDER hitting.

Dorian Thompson-Robinson has been a top-notch player in college football so far, playing mostly mistake-free football with noticeable improvements from a year ago. He is the main catalyst of an offense that averages nearly 40 points per game, tossing nine touchdowns to just one interception this season.

The best player, however, is Zach Charbonnet who is a beast out of the back field. He leads the Bruins in total TDs with seven and averages 7.8 yards per carry. Brittain Brown is also a solid contributor to the ground game for UCLA, averaging 5.6 yards per carry with two TDs.

The other big name on offense for UCLA is receiver Kyle Phillips who has 294 yards and five TDs - clearly the favorite target for DTR. UCLA's defense isn't too shabby, giving up 25.2 points per game with seven forced fumbles and four interceptions. The 25.2 points allowed isn't terrific, but it's not bad either. The more concerning stat on UCLA's defense is that it has only recovered one fumble of the seven forced.

Mitchell Agude is also responsible for four of those forced fumbles. The secondary has a much more consistent takeaway pattern, that is also more balanced throughout. Four different players have seen an interception for this Bruins defense, two of which have been returned for at 33 yards or more. UCLA also has 14 total passes deflected, only one of which recorded by a Bruin with an interception. In layman's terms, this defense is deceivingly tough to pass against.

Donta Jackson has one of the four interceptions, but also has a team-high 2.5 sacks of the team's nine total. Between he and Agude, the Bruins are typically playing with an advantage on defense but they need to take advantage of possible turnovers more frequently. 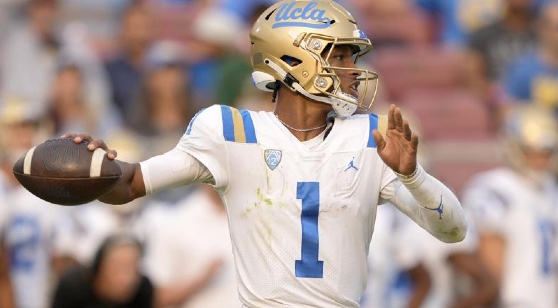 UCLA has covered the spread in seven of its last nine home games when facing Arizona State. (AP)

Inside the Stats - UCLA Bruins

Arizona State's defense is the question here, and if it shows up then the UNDER is a lock. UCLA's offense is averaging almost 40 points per game however, so it's possible they run away from this game at home - but that will require more consistent takeaways from the UCLA defense and specifically the forced fumbles created.

Daniels will more than likely make more mistakes in this game than DTR, so a lot depends on the Bruins ability to take advantage of possible turnovers. The trends are too consistent to ignore as well, specifically Arizona State's lack of success against UCLA. The Sun Devils have failed to cover four of five against UCLA while also losing eight of 11 in Pasadena. The spread is a concern, so if picking a winner I suggest the somewhat low moneyline favoring the better home team with a quarterback that takes better care of the football than his counterpart.

If the moneyline is too high, which it is for some, then the UNDER should be fine hitting in this one.