With a playoff victory by Tony Finau, the 2021 FedEx Cup playoffs are off and running. It's going to be a short week for the majority of this week's field who had to stay around in New Jersey for the Monday finish and it iwll be interesting to see if that impacts the play at this week's BMW Championship.

The quick turnaround is definitely not ideal for guys when you consider that it's also a brand new course getting featured on Tour this week, with the BMW Championship being held at Caves Valley Golf Club in the Baltimore area. A fresh track for all 70 competitors isn't the worst thing in the world though, but for the bigger names that were up higher in the playoff standings that missed the cut last week and still advanced, the extra rest, smoother travel, and longer prep time could be a slight edge to consider.

It's still going to be about finding the right statistical player profile that's likely to have success at Caves Valley, and that's where it being a new venue does cause some frustration.

Knowing only the par, yardage, and the fact that we will see plenty of sand at Caves Valley this week, the first idea I had to break down a potential profile was to go back and look at past winners this year on longer (7400+ yards) Par 72 golf courses.

Going back to Patrick Reed's win at the Farmers, it really has been a list of who's who for these longer Par 72 tracks. You've got names like Morikawa (Workday), DeChambeau (Arnold Palmer), Spieth (Texas Open), Matsuyama (Masters), Mickelson (PGA), Cantlay (Memorial), Rahm (US Open), and even Schauffele if you want to throw the Olympics in there as well.

Considering it's also very hard for anyone outside of the Top 50 in the FedEx Cup standings to make that leap into the Top 30 for the Tour Championship without a win or Top 3-type finish this week, another week where a possible profile fits by staying near the top of the board is already emerging.

Another interesting thing to notice is that of all those names i just mentioned with wins on long Par 72 courses this season, only Mickelson currently ranks outside the Top 50 in Strokes Gained: Approach. Obviously that hasn't likely been the case for all those names the entire year, but length doesn't seem to be the be all, end all when longer tracks come up. But you'd better have guys that can hit the greens.

Length advantages are minimal for the most part at this stage anyways for the top guys, so going heavy on approach with some length is always nice, and it doesn't hurt to at least be aware of sand saves and/or scrambling numbers for some guys. If conditions are easy, most of these guys will end up going low. But the fairways are still rather narrow, and if accuracy does end up being the biggest key, scrambling around to save par or avoid the big number will be just as important. 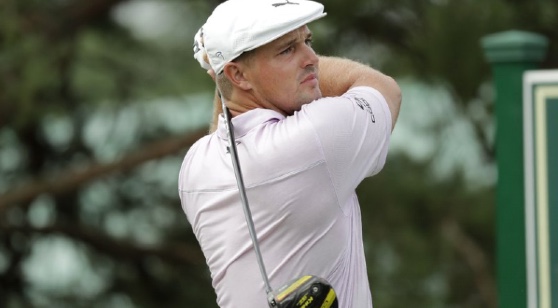 Bryson DeChambeau has seen a Top 35 finish in 3 straight events, including a Top 10 at the St. Jude Invitational. (AP)

Jon Rahm (+550) held a two-stroke lead on the back nine of the final round last week as the pre-tournament favorite, so seeing him in that role shouldn't be a surprise. The dominant fashion he finds himself in that spot with the next names – Jordan Spieth and Xander Schauffele – priced at +1600 is what caught me somewhat off guard, but the only argument against Rahm this week is likely going to be price related, because even with him being unable to close the deal at the Northern Trust, his game is the best in the world right now.

Justin Thomas and Collin Morikawa (+1800 each) are the other two names below the +2000 mark, with Dustin Johnson, Bryson DeChambeau, and Louis Oosthuizen all sharing +2200 odds in that next wave.

A group of five other great players – Koepka, Cantlay, McIlroy, and last week's playoff combatants Smith and Finau – are the only other names under 30-1 currently, with this week's top selection already rattled off.

If the idea is to find guys that are accurate enough to be Top 50 in approach and have some length to them, I think these two names at the top make a lot of sense.

Defending champion Jon Rahm won this tournament last year with a -4 score, as the rough and overall course setup reminded many of what we can see at US Opens. That Major is usually held at a lengthy 7500+ yard course regardless of par, and length and accuracy plays quite a role there. Both of these guys are US Open champions, and even if length isn't a big distinction for some at this level, these two guys are still at the top of the food chain in that discussion.

DeChambeau crept inside the Top 50 in SG: Approach to T49 this week after a great Northern Trust event. It's the second straight start for DeChambeau that's seen him average better than +1.00 SG: Approach per round over the field, but the shaky play around the green has still been there for him at the worst of times. Probably not going to win here if that's the case for him this week, but there is not a whole lot of reason to think that it will be a big concern.

Johnson is the guy that's more desperate for playoff points sitting in 20th, but even then, an average week for him should be good enough to get him in. The finishes haven't been there for Johnson of late this year and it's why his prices have been falling, but like when DeChambeau was better than +3000 a few weeks ago, Johnson appears to be a little undervalued to me.

DJ's 36th in SG: Approach right now, and don't let last week's MC skew you too much given that he didn't have a driver in the bag for most of the first round. His two rounds at the Northern Trust did see him putt the ball really well though, and I think we see a great four rounds from Johnson this week.

Conners sits 8th in SG: Approach entering the week, as he's just continued to produce quality finish after quality finish. A 3rd round 62 at the Northern Trust helped him get a Top 10 in the first playoff event, giving him a bit more wiggle room in the playoff standings, sitting in 20th now. He's been putting together these great finishes on the back of his strong long game (off-the-tee and approach), hoping that his short game doesn't cost him too many strokes to the field on a given day.

It's that shaky stuff around and on the greens that probably makes him a better guy for placement bets (Top 5/10/20) as he's been improving overall but is still ever so slightly below average in SG: Putting in his last three starts. Improvement is still improvement though, and with no advantage on the greens for anyone, maybe another hot day with a 62 or 63 is enough to vault Conners into contention, with an “average” Sunday on the greens being good enough for a win.

Bradley does everything well until he gets the putter in his hands, and on a blank slate course for everyone, I'll take that as the only disadvantage every time at these odds. But he ranks 25th in SG: Off-the-tee, 5th in approach, 48th in around-the-green, 5th in tee to green and 34th in total. It's the 186th ranking in putting that drags down that overall number, but if you want a guy with length and accuracy and then hopefully opportunity, a play on Bradley makes quite a bit of sense.

Let's not forget that Keegan also sits 32nd in the standings right now so he needs a good week to bump somebody out. If the putter can be something that doesn't completely desert him and get hot for say 36 holes, I think we get that good week out of Bradley here.

I mentioned earlier that the only argument against Rahm right now likely has to be focused on price, and these two head-to-head matchups are somewhere where I think the reward far outweighs the risk.

For one, Morikawa (1st) and Thomas (3rd) both rank ahead of Rahm in SG: Approach and here they both are getting better than +150? I don't buy it.

Add in Rahm seeing his lead on the back nine on Sunday slip away and him knowing he's comfortably going to be in the Tour Championship regardless of how he goes around this week, I'm not sure we get a fully focused Rahm. Obviously he's still going to want to dominate and get that #1 spot in the standings back, but a comfortable week spent ironing out the kinks in his game before he gets to the Tour Championship isn't the worst result for him either.

So I'll take a shot that at least one of Morikawa/Thomas can find a way to get the better of Rahm this week because at these prices that's still a nice win.