When the PGA Tour arrives at TPC Sawgrass for The PLAYERS Championship every year it's nice to view it as a sign of big things to come in the golf world.

The Majors are coming once a month now after that, and then it's right into the FedEx Cup playoffs bleeding into football season.

Last year's arrival at The PLAYERS was a far bigger moment than how a handicapper plans out his months well ahead of time, as 18 holes were played before the entire thing was shut down.

For a tournament that nobody's ever successfully defended as champion, Rory McIlroy is in the unique position of trying to defend a title he won two years ago. No repeat champion has much more to do with the quality of the field this tournament brings every year and this year's edition at TPC Sawgrass is no different.

Keep the ball on land and dry is always the first goal for guys at TPC Sawgrass, as water looms everywhere and one bad hole has a made cut, Top 20, or even a potential victory aspirations go splashing down with it. Guys who know how to plod their way around this course, knock down a few putts, and avoid the explosion holes have found a way to get it done here.

Webb Simpson's ball striking here was superb a few years ago when he ended up winning, and when someone who's long been known as a pure ball striker like Sergio Garcia has finishes of 1st, 2nd, and 3rd, at The PLAYERS, it's precision iron games that will win out here in the end.

Despite all the potential disaster out there for these guys, TPC Sawgrass gives up plenty of opportunities as well if you are hitting your spots. Faster green speeds are a sign of things to come for players in coming weeks so scrambling in all forms matters as well, and if you can quantify it, guys that can hold up under the pressure of the final few holes. A huge range of scores can be shot on any of the final handful of holes these guys will see and that's exactly where you'll want that ball striking to hold up before anything.

Finally, I mentioned nobody's ever successfully defended this title, and even multiple time winners of this tournament is rather rare – only six players have multiple PLAYERS titles. Even if only used as some arbitrary idea of narrowing down the card given it's depth it's an option to consider. There are still a boatload of great names to consider in that case. 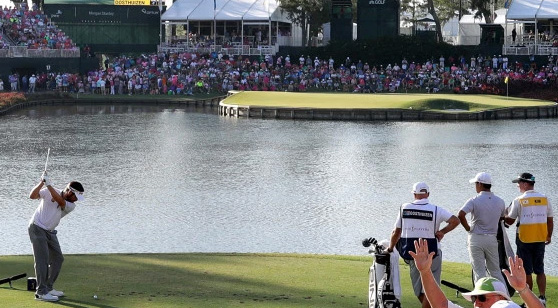 After having the 2020 Players Championship postponed, the PGA will be back at TPC Sawgrass this weekend. (AP)

Dustin Johnson (+1200) would be one of those names available as he's not a past champion here, and what's not to like about his game.

Collin Morikawa (+2000) is one of the names at that barrier, leading the way for “first timers” here who haven't historically come away with a victory here either.

It's a name that shares that price tag with Morikawa this week where the selections start though.

Golfers to Watch - The Players Championship
Top Picks and Predictions

Contender to Back
The Players Championship

No worries about being a past winner here with Thomas yet, but in five starts in the 2021 calendar year it's been all about the putting for JT.

His two missed cuts have come thanks to losing about 2.5 strokes to the field in each of those events, whereas slightly positive putting results in the other three starts have resulted in a 3rd, 13th, and 15th at the WGC a few weeks ago. He's laced it in the Strokes Gained: Approach category in a couple of those outings, and if his putter ever gets relatively warm, Thomas will be in contention regardless of venue.

He's seen many top names rivalling him in the world rankings pick up wins in recent weeks, and winning the PLAYERS would be that little extra message to let people know he's still around up there.

If all the water and sand wasn't enough of a distraction to deal with at Sawgrass, if the wind is up at any point during the week, this course can get downright nasty. Hard not to think that doesn't have at least a little something to do with the fact that so many internationals have won this tournament, as four of the last six champions have been non-US born players.

Fleetwood's a guy that's never minded a windy day, and it was nice to see him sneak in a T10 last week for his third Top 20 in his last five starts. He's had finishes of 7th and 5th at The PLAYERS the past two years, so navigating his way around this diabolical track is something he's also familiar with.

He's another guy who's always going to rely on the strength of his approach game and let everything else hopefully fall into place from there, but he's gained strokes on the field in approach for six straight starts. Avoid those tough scrambles and get average to above average putting like Justin Thomas is looking for, and Fleetwood's name should be in the mix as well.

Oosthuizen's course history here is littered with missed cuts ( four in nine years), but he's also got a runner-up finish to go along with a 19th and 28th and his top three placements in that span as well. He's a name I believe you've always got to think of when referring to a guy who's likely to stay calm in the chaos the final stretch of holes can bring. He's also a guy who can play station to station golf when length isn't a huge advantage, and that smooth putting stroke of his could prove exponentially better on these fast, tricky greens this week.

Recent form of three Top 30's in his last three starts has one of those Top 30-type PLAYERS performances from his past more of the hope than one of those past missed cuts at TPC Sawgrass. If Louie can be the opposite of the other two here and dial in his approach game early on and let his strengths around the green go from there, a 66-1 ticket with him in contention on Sunday is a nice place to be.

Tough for any argument based on recent form to stand on two legs for long behind this play backing Spieth, but Spieth has put together a nice stretch of consistent golf this past month or so, and against a first-timer at TPC Sawgrass, I can't pass up this price.

First timers may not win at TPC Sawgrass and obviously that likely won't matter in a head-to-head matchup, but three Top-4's in four weeks rivals Morikawa's win and 43rd in the same span. Spieth's history with TPC Sawgrass has not been a pretty one with four missed cuts in six starts, so you can question how valuable that experience really is worth here, but it's also a spot where Morikawa is coming off a win in his last outing, something that can make a lot of sense in golf betting, even with two weeks off.

Throw that big price on top of Spieth with all that lined up here, and it's an easy play to make as he may not be getting as much credit as he deserves for his recent play as odd as that sounds. Three 4th place finishes or better in four starts is phenomenal, but how they played out for Spieth there probably should have been at least one win in there too. That's a hard image for most to shake when thinking about Spieth and it plays into this price as well.

I'll always believe that debutants at TPC Sawgrass are alright options to fade, as there is just so much to deal with and think about on every shot here, that one bad swing that lands in the water is more likely to derail rounds for guys that haven't experienced that here before.

There is a lot to like with Spieth's game currently, and with Morikawa finding himself in two “fade” spots as a TPC Sawgrass debutant and off a victory, this underdog price was not something I was going to pass up.

Hole 17 Balls In the Water in Tournament
The Players Championship

The 2016 event had just 36 balls get wet on #17, but there were 45 again in 2015, making it four of the past five years this tournament has been held; this total has been eclipsed.

With the disjointedness to practice/travel time for guys simply by trying to play golf in a pandemic, there are probably plenty of guys unsure with where their iron game currently sits on the trust scale, and that tee box on #17 can be very daunting in that case.

Furthermore, we can't rule out guys going for broke late on Sunday if the chance for a comeback win in there, and who knows what kind of pressure cooker #17 on Sunday brings for the first big PGA event that's had a significant amount of fans in attendance again. Grips on those wedges might get a little tight.