After a Ryder Cup event that Team USA dominated from start to finish, the regular PGA Tour is back up and running this week for Event #2 of this wraparound 2021-22 PGA season.

The Sanderson Farms Championship has long been one that hasn't got the greatest end of the schedule each year, and being after the Ryder Cup this year means that it's going to be in the running for one of the weakest fields we will see all year. The only player in this field from either Ryder Cup side is Sergio Garcia (+2000), and he might only be here because he's the defending champion. I can't envision getting behind Garcia in any fashion this week after such a mentally and physically draining week like the Ryder Cup is for these guys, especially in Garcia's case as he was on the wrong end of that USA beat down.

It's an event that still has FedEx Cup playoff points up for grabs, and for the guys that are in the field this week, it may be one of their limited events on Tour this year they get where the field is this wide open. That's usually how these fall events go on the PGA Tour, and this week could be no different.

The names from top to bottom in this field may not be as well known, but the general weekly PGA Tour theme of needing to be strong in the approach game and with the putter applies wholeheartedly at the Country Club of Jackson. Winning scores are almost always up around the -20 figure, as guys get hot with the putter in a hurry on these relatively easy greens and those that are giving themselves plenty of makeable birdie looks are the ones that are going to be teeing off in the final few pairings on Sunday.

If you go back and look at some of the data for recent winners here, most of the guys who did finish up there had great SG: Putting numbers for the week. Most that finished in the Top 10 paired those good SG: Putting numbers with long game stats like SG: Approach and even SG: Off-the-tee to a degree, that it's got to be the player profile to hunt out this week. Putting numbers are always going to be fickle, but last year's tournament saw 18 different players average +1.00 SG: Putting for the week and Garcia wasn't even one of them. But the places that were in that group of 18 were 2nd, 3rd, T4, and three of the six guys who finished T6 as well. Not to mention a handful of Top 20 finishes in there as well. 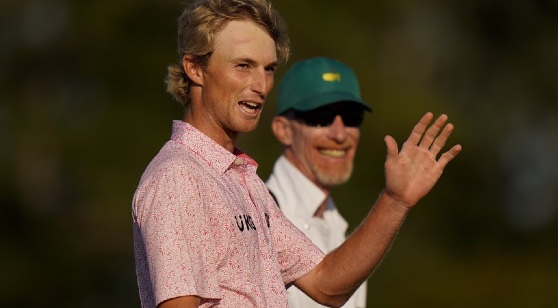 Will Zalatoris enters the Sanderson Farms Championship as one of the favorites to win at 16/1 odds. (AP)

Knowing how important putting will be to success at the Country Club of Jackson and backing the guys who will end up being the best putters of the week are two very different things, but leaning on SG: Putting numbers from last year etc when deciding between players one considers as betting options isn't the worst idea. Anyone can get hot with the flatstick for 36+ holes though and sometimes that's all it takes.

But it's going to be the SG: Approach numbers that you'll want to address as the starting point though, as the 2020 Sanderson Farms Championship had 9 different players average +1.00 SG: Approach through the full four rounds and those nine players finished 1st, 2nd, T6, T6 (both different from the three other T6 finishers from SG: Putting angle), T12, T12, T23, T23, and T46.

That's the more repeatable skill set to start the handicapping process with, and that is the best place to start.

Defending champ Sergio Garcia (+2000) is one of five names at that 20/1 or lower threshold, as Sam Burns (+1400), Corey Conners (+1600), Sung-Jae Im (+1600), and Will Zalatoris (+1600) are the other names in that group. Conners and Im were the runners-up here in 2019 and 2020 respectively, and considering how known they are for their approach game, having those names show up with great results at the Country Club of Jackson further pounds home the point that the approach game is where to start.

Beyond that you've got Charley Hoffman (+2500) and Cameron Tringale (+2500) listed next before a slew of names priced at +3500. Cameron Davis, Keegan Bradley, Seamus Power, Kevin Streelman, Si Woo Kim, Mito Pereira and Harold Varner III are the names in that group and nearly all of them have had various levels of success at this course in the past.

It's still hard for the brain to process a +3500 price tag on nearly all those names when they are all basically double that or higher during most weeks on Tour, but relative to the field those prices are graded out properly enough where treating the price and this week in a complete vacuum for backing any of those guys is a must.

You won't find any of those selections on my card this week as getting over the price point with that list of names is just too tough for me to do. I view it as there just isn't enough consistency in the games of any of those guys to get involved with them at this stage.

Contender to Back
Will Zalatoris +1600

If starting with the approach game is the goal, backing Zalatoris as one of the favorites makes a lot of sense. Off last season's numbers, Zalatoris finished 7th overall in SG: Approach and is 2nd best in the field this week behind Keegan Bradley (4th). Putting is the issue for both guys so I'd argue there may be a case for adding Bradley at double the odds as well, but putting is something Bradley got slaughtered on in 2021, as there were only 10 guys with worse numbers than him on the greens.

Zalatoris was -.066 SG: Putting which is also not all that far off of being a break-even putter. Some of any improvement there will come as he gets more familiar with the courses over the seasons, but relative to Bradley being a Tour vet and posting -.548 and being nowhere near close to a break-even putter, double the odds may not nearly be enough on a course where you expect -20 to be the winner.

9th in SG: Tee-to-green game last year for Zalatoris – which again only trails Bradley in this field – should give him a four-round advantage in consistency over a big chunk of this field, and as long as the putter can be break-even, who knows. His last two starts last year saw him finish gaining a half-stroke or better on the greens against the field (+0.64 and +1.12), and keeping that up this week will have him near the top.

Munoz is a guy that really comes in as guy loaded with stats slightly above Tour average as his swings between scores within an event can still be quite big. His first start of this season was awful two weeks ago (76-80), which hopefully was him getting all the bad out, as he won here in 2020 on the ability to put four low rounds together.

Going low at times is never a big problem for Munoz as he was 5th on Tour in total birdies made last year (417), but he also had the 4th highest total for bogeys or worse (308). Those are the swings you've got to be able to stomach with Munoz, who's probably much more suited for first round leader bets in terms of skill.

But he did light up this place in 2020 with a +3.01 SG: Total for the week, but it also turned out to be his best SG: Putting week of the entire season for him that year, as this play can feel a bit like trying to catch lightning.

Munoz still is a guy that's still +1.0 or better in SG: Total in each of his last four starts to suggest that some consistency may be coming up over the horizon. Pair that with one of those rounds filled with birdies Munoz is known to have and being on a course he's got to like at least somewhat being a past champion, and +4000 is worth riding whatever variance Munoz's scores bring this week.

Korn Ferry grads just spent an entire golf season knowing they needed to go very low to have a shot at a win, so backing a few of them in these fall events is another strategy to potentially fall back on.

Jaeger was a guy who found success doing it at that level last year though, as he was 2nd on the Korn Ferry Tour in birdie average (4.57), 5th in scoring average (69.11), dominated the regular season points standings to finish 1st by a wide margin, and finished the season in late August with three consecutive Top 4 finishes.

The current form is there, the ability to go low is there, and he's already had four career starts at the Sanderson Farms Championship since 2017, peaking with his T14 finish here in October of 2018, so course knowledge won't be an issue either. Worth the risk this week.

The 2022 season got off to an awful start with these matchup plays as I was against Maverick McNealy and he nearly won the tournament. Could make those on Conners this week happy to see this play, but Burns has all the tangibles to be a worthy field favorite this week, and while the price in the outright market had me shy away from Burns there, in a head-to-head I'll consider him against most.

Statistically he's like Zalatoris with a very good putter, as Burns finished last year ranked 30th on Tour in SG: Approach, and 9th in SG: Putting. That's about as strong as it gets in finding that initial player profile, but against someone who's got great approach numbers themselves (9th in SG: Approach) but also struggles with the flatstick a fair bit (112th in SG: Putting), I'll happily take the better putter at a pick'em price in an event where -20 is going to win.