It's on to California for the PGA Tour, as we get a tournament that's seen all kinds of winners.

Andrew Landry (+20000) and Adam Long (+60000) cashed some huge paydays the past two years for anyone who was willing to get behind them.

It's a course/event where guys have got to go low and take advantage of the shorter yardage, as bombers are always going to benefit there if they are hitting short irons into the Par 5's.

It hasn't always translated into wins for the big names in this event though, so where you want to weigh your statistical approach can vary.

Par 5 scoring should be near the top regardless, but birdies have got to come from anywhere and everywhere if guys ultimately want to keep pace – every winner here has finished -20 or better since shifting to a 72 hole event. 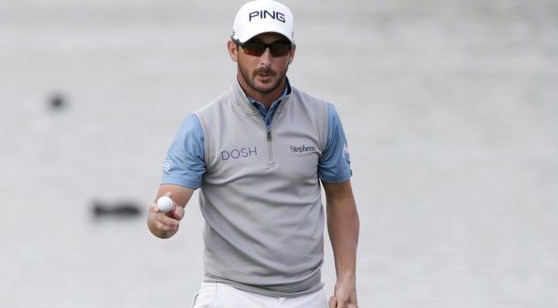 Andrew Landry will be looking to defend his title this weekend as the Tour returns to PGA West TPC Stadium Course. (AP)

Not all that unusual from other Pete Dye designs that the Tour visits through the season, with water lurking on about a third of the holes, but target golf with a hot putter is going to decide who's up at the top.

Too much scrambling around the greens will end up being too costly for the low score that's going to be needed.

Meaning Greens in Regulation numbers should be given at least a peak at some point in the handicapping process, as chipping in and around any greens of a Pete Dye design tends to be followed by an ugly number or two.

At 7,100 yards, length isn't the biggest of advantages for the guys that do own that edge, although having shorter clubs into these tricky greens is never going to be a horrible thing either.

Not a whole lot there to find separation to start the tournament, and expect the tournament to be tight itself throughout. Nobody's won this event by more than two strokes since it went back to a 72-hole outing nearly a decade ago, so waiting until the weekend comes to fire on guys who are already showing they are playing well is a good betting option as well.

There is not one name inside the 10/1 range this week, but with Patrick Cantlay (+1400) as the listed favorite, there is always going to be room for disagreements at the top.

Golfers to Watch - The American Express
Top Picks and Predictions

Contender to Back
The American Express

Nothing spectacular from Wolff in his debut here a season ago, finishing 61st in a week he was one-under par over the course of the weekend. He's not got the most eye-pleasing numbers in things like GIR% and even scrambling, but whenever there is an average field where the score is going to be low, Wolff tends to find his name among the crowd.

Wolff finishing -20 at the 2020 Rocket Mortgage Classic was still only a 2nd place finish, and the 3M Open a few weeks later a -14 score had him finishing T12. His win in 2019 was with a -21 score at the 2019 3M Open, and his unique swing can really get that heater going hot for Wolff if it's all clicking into place.

A bomb and gouge style of course should ultimately fit Wolff's game, and while his seasonal statistical profile is still being built out, in a field full of guys at the top who've had issues with winning and closing out tournaments (that aren't Majors in Koepka's case), Wolff has shown he usually doesn't beat himself when put in those spots.

His distance off the tee (311.6) and overall profile should fit this venue for years to come, and the price and skill set make it a nice marriage of name and price at the top of the board.

Burns is a guy where a lengthy time off may have to be slightly concerning (hasn't played in nearly three months), but in two starts at this event he's got finishes of 6th and 18th under his belt already.

Outside of his around-the-green numbers, he comes in to this field with great numbers across the board - 3rd in SG: Off-the-tee, 45th in SG: Approach, 20th in SG: Tee-to-green – and even in a short campaign so far, his improvements in the approach game seemed to stick before the layoff.

Add in a friendly venue for Burns, who stormed up to his 6th place finish with a 63 on Sunday. His two starts here have had those finishes despite one round being in the 70's each time, and if Burns can eliminate that this week, having a shot with him on Sunday is going to be a strong possibility.

Any tournament that can turn into a putting contest will put Burns among the favorites on the greens, as he's done nothing but gain strokes on the field with the putter since he started playing mostly on the PGA Tour.

If Burns avoids the big number and avoids chipping it too often, his putter will keep him lurking around if that really low round hasn't already happened.

If Greens in Regulation numbers are going to help here too, Burns being ranked 5th on Tour (3rd in this field) in GIR % (75.93) doesn't hurt the cause either.

Tringale has been someone who's made sure this event is on his schedule each and every year, with two missed cuts, and five Top 40 finishes at this event in the past 10 years.

Knowledge of the course after all those rounds can only help, and getting these longer shot guys at places you know they like to be at (come every year they can), other numbers can warrant a flyer from time to time.

2020 GIR % numbers are still taking shape this early in the season, but Tringale's not far behind Burns at 73.06%, ranking T24th overall.

A guy that's sticking greens at the moment and playing a course he likes to be at is always a combination I can get behind, especially when he's someone who's had a positive SG: Putting number in every season but one since 2011 (2018 he ws -.104).

Maybe he gets hot enough with the putter to get to that next level of low score here that has kept him out of a Top 10 finish the past 10 seasons, and maybe he doesn't. Worth the addition to the card regardless.

Only makes sense to back Burns as an underdog in his 72 hole matchup with Griffin if he's on the outright card, even if some skepticism remains about his GIR % holding true the rest of this season.

But all the arguments I made for Burns earlier regarding his improved game and him already being a good putter on Tour who's only seen Top 20 success here remain just as valid.

Even if a benchmark of Top 20 is rather high for Burns, still don't agree that he should be a dog to someone who's only missed the cut here in one start over the past 10 years. Simply too hard for me to get off that perspective here.

Going all in with Burns across the board this week as giving him and Cameron Tringale that extra placement cushion here at a solid return has to be done behind those outright and/or Top 5 bets.

This is a tournament where guys can just get too hot for even someone's best golf to overcome, so that cushion isn't bad to have. Tringale and Burns both have had a Top 20 here before in the past, and as long as one of them makes a run at it and lands here, between the two of them we are ahead.

The selection of Patton Kizzire came after Kokrak's success last week, (1st round leader, won his matchup) had me going the route of putting the last guy on the outright chopping block into a prop play.

Kizzire is the guy that's more likely to be the one that goes the scorching hot putter route (25th in SG: Putting) to be among the leaders, with putting as one of his strengths again, but thanks to hitting a few more greens (70.74%) in 30 rounds this season, better results have followed.

Back-to-back missed cuts here the past two years is what put him on the chopping block late, but recent form of three Top 11 finishes in his last four starts with only four of those 16 rounds in the 70's, a 3/1 price tag on him finding the first two pages of the leaderboard is something I can get behind.