As the PGA Tour moves into their annual team event this week down in New Orleans, it's a tournament that's got to be exponentially more fun to be playing in as opposed to handicapping it.

It's hard enough to find one guy each week that will best these fields, and now in a team event that uses stroke play scoring, you know everyone's going to go low and now you've got to find the two guys who will best the field.

It's an interesting mental shift in the golf handicapping process, and even taking this week off is a path I'm not completely against. Who knows what parings of guys end up turning this weekend into four rounds of golf with a buddy, or what statistical weakness in a particular pairing may end up being too heavily leaned upon.

If I'm going to back a guy in an individual event who's not the greatest putter, I know he'll be the one hitting all those strokes regardless and I've got to be comfortable with that. But for as many weaknesses that get bailed out by teammates in this format, there are always a few that end up costing teams at the worst times.

Having the worse putter of the two as the guy needing to make late in the tournament is just something you've got to be comfortable with here, and not something you ever really consider otherwise. Alternate shot format on Friday/Sunday only magnifies those scenarios.

At the same time, because a team stroke play event does erase so many “mistakes” or bad holes/shots for guys, I do believe the general strategy of leaning towards the better players in the world and their teams makes sense. 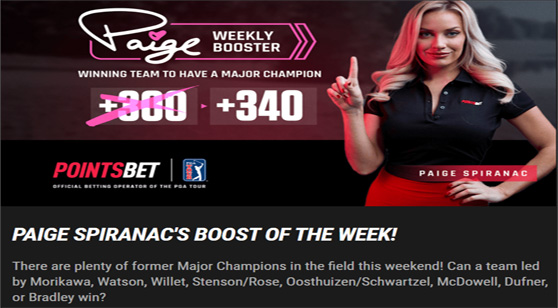 Guys like Jon Rahm (defending champ with Ryan Palmer), Xander Schauffele, Patrick Cantlay, Collin Morikawa, and Tony Finau have all earned their high world rankings for their play over a long stretch of time and it's come with scoring all those handfuls of bad holes they might have had during every round.

With the opportunity for a teammate to pick up that slack within a round in this event, and these best players in the world only playing their best numbers on the scorecard, chances are a few of them will rise to the top by Sunday.

Rahm and Palmer shot 64-65-64 in the first three rounds of this tournament in 2019 to cruise to a three-shot win over Sergio Garcia and Tommy Fleetwood.

Rahm, Garcia and Fleetwood were three of the bigger names in the field that week, but the team of Patrick Reed/Patrick Cantlay could have been considered in that group as well and they missed the cut (65-75).

Having a few of the bigger favorites in the event is still probably the way to go during this week of the season, and you've just got hope you don't get caught with a pairing like Reed/Cantlay in 2019 where one off-day in alternate shot had them going home early. Ah, the headaches golf handicapping can bring.