It has been a little over 11 months since the winner of last year’s Finals, the Toronto Raptors, received their championship rings on the opening night of the 2019-20 NBA season, but the wait is finally over.

Jimmy Butler and the Miami Heat will square off with LeBron James and the Los Angeles Lakers for one last series to crown the kings of the Disney World bubble in Orlando, Florida. 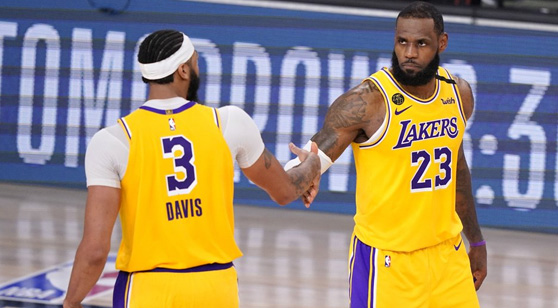 The Lakers will meet the Heat in Game 1 of the NBA Finals on Wednesday from the NBA Bubble in Orlando, Florida. (AP)

The Heat continue to be doubted by the oddsmakers out in Las Vegas, now listing Miami as an ‘underdog’ in its third straight post-season series and a four and a half-point ‘dog for its Game 1 contest with the Lakers.

Without Steph Curry and the Warriors in the NBA Finals for the first time in five years, expect the landscape of the series to look much different as we will see two teams with defensive-minded coaches that play with a lot of energy go up against each other on basketball’s biggest stage.

The ‘over-under’ for this contest sits at 217.5 though, which is still a higher opening total than last year’s Toronto-Golden State Game 1 contest (OU 215).

The Lakers have won both matchups so far with the Heat this year in two very different fashions, but do not get it confused, it was all about Anthony Davis in both games. The first time these teams met up his defense was on display, as the Brow rejected three shots and scored a team-high 26 points during the Lakers’ 95-80 victory.

Aside from Butler’s 22 points on 44% shooting in the Heat’s first game with LAL this season, it was a miserable offensive performance from Erik Spoelstra’s team across the board as his team finished the contest shooting 35% from the field and 17% from deep in the loss.

The second meeting between Miami and Los Angeles was much higher scoring and closely contested, but the spotlight shone bright on Davis yet again by leading the Lakers in scoring for his second consecutive contest against the Heat (33 points, 10 reb, 4-9 3FG).

The Lakers won the contest so it got overshadowed, but the LAL defensive struggles at the guard position were on full display in their second contest with Miami this year, as Kendrick Nunn and Butler combined for 39 points and 6 steals in the contest. It simply was not enough though, as the Lakers escaped with the 113-110 victory.

Including the aforementioned results from this season, make a note that since LeBron joined the Lakers in 2018, Los Angeles has gone 4-0 straight up and 2-2 against the spread in four regular season meetings against his former team.

Heat vs. Lakers
How to Handicap Game 1

At the start of the playoffs, it appeared to be a rocky path ahead, but the Heat have cruised right through the Eastern Conference by knocking off Indiana, Milwaukee, and Boston in just a combined 15 games.

The Lakers were built to beat teams like the Clippers and Rockets, but the Heat actually pose as an interesting matchup for LAL. Mainly because Bam Adebayo is capable of guarding Davis, but also because Miami has multiple, aggressive catch-and-shoot snipers in Herro, Robinson, and Dragic that the Lakers are notorious for having trouble defending outside.

I am not personally putting a dime on the Heat in this series, but Miami still sits as a +375 ‘underdog’ to win this year’s NBA Finals. So, if you are begging for reasons to bet against LeBron, now might be your best chance.

People were worried about the Lakers following their Game 1 blunder to Damian Lillard and the Blazers in the first round...

People were worried about the Lakers following their Game 1 loss to James Harden and the Rockets in the conference semifinals...

People were worried when the Nuggets knocked off the Clippers in seven and if the Lakers could handle the one-two punch of Jokic and Murray...

Now, people are worried about this magical Heat unit that has made the Eastern Conference look like a cakewalk...

Should bettors backing L.A. be worried? No!

There is no need to worry about the Lakers whatsoever heading into this series. Los Angeles’ stars have had their heads on straight and eyes on the prize all the way inside the bubble, as LeBron and AD combined for 50+ points in all five contests against the Nuggets in the Western Conference Finals.

The Lakers have completed gentlemen’s sweeps in all three of their playoff series so far, have no injuries, and come into this series piping hot. The betting outlook appears bright in LA to say the least.

Good to see King James left off the injury report heading into the NBA Finals. His name was added to the report due to a nagging groin injury during the heart of the Lakers’ series with the Nuggets, but obviously was just for precautionary reasons as LeBron appears to be healthier than ever heading into his 10th NBA Finals.

The Heat will likely mix in a variety of 2-3 zone schemes on defense and try to make the Lakers beat them from deep, similarly to how they strategized for the Celtics.

Los Angeles is typically streaky from deep, and I think there is a good chance both teams get off to a slow start in Game 1 while the Lakers try to find their rhythm from downtown, after not needing the 3-ball a ton in its series with Denver.

Duncan Robinson played a crucial role in Miami’s series win over the Celtics last round by scoring 13+ points in four out of six Eastern Conference Finals games against Boston. The Lakers really struggle to defend the perimeter and I think it shows in this series through pesky shooters like Robinson and Herro. Back Robinson to go ‘over’ 11.5 total points in Game 1.

Anthony Davis holds the NCAA single-season freshman block record with 183 blocks in his first season at the University of Kentucky and clearly that trait has carried over with him to the NBA as he still holds the title of “Pelicans All-Time Franchise Blocks Leader.”

AD has blocked at least three shots in both contests against the Heat so far this season. Back Davis to block ‘over’ 1.5 shots at +110 odds on Wednesday night in potentially the biggest game of his career to date.

The talent-level is not there, but something about this Heat team gives me a Greg Popovich Spurs vibe, which is a team that gave LeBron a bit of trouble back in his Miami days.

They have a phenomenal coach, veteran leadership, streaky shooters, and have played with an unsurpassable amount of pride and heart every time out in the Orlando bubble. I expect them to give LeBron and company everything they can handle in each game, making spreads tough bets.

The Lakers have ended all of their opponents’ playoff dreams in five games or less so far this post-season, but I think that ends here against Miami. There is no doubt in my mind LAL will walk away from the Disney World Bubble as NBA champions, but a team coached by Spoelstra won’t lay down as easy as Denver.

My faith in King James is unwavering. Miami is just the toughest opponent LA has squared off against mentally. I think it takes them one extra game here. Lakers in 6 at +300 odds is my bet.

Ultimately, I believe the Lakers will be crowned champions in the NBA bubble, so my pick is really comes down to who I want between AD and LeBron for Finals MVP.

Miami actually has somebody with the potential to guard Davis tightly and there is no doubt the King has a bad taste in his mouth after Antetokounmpo was named regular season MVP in consecutive seasons. There is a very good chance this year’s Finals could be the “LeBron Show” for its entirety – Give me King James at -110 odds to win Finals MVP.

Something magical is going to have to happen in Disney World during the NBA Finals if the Heat are going to escape the bubble with the Larry O’Brein Trophy, so that is why I am also sprinkling some change on Tyler Herro (+4000) to win Finals MVP just in case something crazy happens.

If Butler and Bam are the best players on the court for the Heat in this series, Miami is likely in trouble. The Heat’s firepower is going to have to come from an unexpected source to get it done in this series, and that source will likely be Herro if Miami is going to give the Lakers a real run for their money.