While “Thanksgiving Day Football” may currently own the crown for America’s favorite holiday sporting tradition, “Christmas Day Basketball” comes in at a close second, especially for bettors, thanks to ESPN broadcasting a 12-hour, 5-game marathon of jam-packed NBA action to celebrate the holidays.

Plenty of games to bet throughout the day, make sure you don’t miss out on the rest of VI’s Best Bets and Game Previews for Christmas Day.

For the third contest of the Christmas Day NBA marathon, the Brooklyn Nets will visit the Boston Celtics as Kyrie Irving will return as a 3-point road favorite to the city that originally took him in following his departure from Cleveland.

How to Handicap Nets vs. Celtics

The big question around the NBA heading into this season was, “How healthy is Kevin Durant going to look?” and I believe he answered that question rather quickly in his Nets’ debut as the former Warrior tallied 22 points, five rebounds, and three assists across just 25 minutes in Brooklyn’s blowout victory against his old team on Tuesday night (125-99).

Kyrie Irving looked extremely smooth and explosive with the ball in his hands in the Nets’ season debut, tallying 26 points on a 10 of 16 clip from the field and 57.1% mark from three-point territory. ‘Under’ tickets cashed in the Nets’ victory over the Warriors on Tuesday night, but that can mainly be attributed to Golden State failing to crack 100 total points as Brooklyn cruised to an easy 125 points with its reserves in for the majority of the second half.

The Celtics also reigned victorious in their opening contest on Tuesday night as Jayson Tatum spoiled Jrue Holiday’s Bucks debut via a 3-point bank shot with 0.4 seconds remaining in the contest to gain a 122-120 lead, which inevitably stood thanks to Giannis Antetokounmpo splitting pair of free throws to conclude the matchup with an overwhelmingly dramatic ending (W – 122-121).

The additions of KD and DeAndre Jordan have completely changed the landscape and the dynamics of this Nets team, so looking at matchups from previous seasons between these two organizations should be taken with a grain of salt.

I believe the best way to predict the outcome of the game on Christmas Day, is to take a look at last week’s Nets-Celtics preseason matchup and to build from there.

Brooklyn absolutely ran Boston out of the building last week and while it was just and exhibition, all typical starters for both teams received 20+ minutes of action and the Nets still ran away with the game by 20+ points early.

Although we have not seen much from the Brooklyn Nets under their current construction, most books already have them listed with the second highest odds to represent the Eastern Conference in this year’s NBA Finals (+275), and I believe they will quickly become the favorite as the season progresses.

Brooklyn snuck into last year’s playoffs as the 7th seed without Durant, Jordan, and Irving (21 GP last season), and really proved to me how dangerous the players we call their “depth” actually are. Spencer Dinwiddie is a guard capable of starting for multiple teams in the NBA but is drowned out by the spotlight of Irving on most nights.

Joe Harris and Caris LeVert provide the adequate shooting role pieces required to round out a championship roster.

Nobody is impressed with the Nets win over the Warriors on opening night. I expect people to be talking about the Nets very differently following a statement win over Boston on Christmas.

The Celtics proved on Wednesday night with a statement victory over the Bucks that they are back and seeking vengeance after falling just two wins short from making it to last year’s NBA Finals in the bubble.

Boston is slightly short-handed at the guard position heading into Wednesday night with Kemba Walker and Romeo Langford missing games, but obviously Brad Steven’s guys will be making no excuses for themselves against Brooklyn after knocking off the current favorites to win the Eastern Conference on opening night. 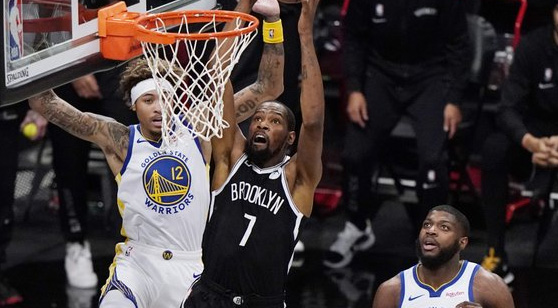 Kevin Durant looked sharp in his NBA debut with the Nets, scoring 22 against his former team in the Warriors. (AP)

Walker will remain absent from the Celtics’ lineup on Christmas Day as he is still recovering from an offseason knee treatment. Jeff Teague stepped up in a big way for Boston in his debut with his new team, delivering 19 points on 46.7% shooting and knocking down all four of his three-point attempts off the bench.

Dinwiddie was in the starting lineup for the Nets’ season opener against Golden State but was quickly taken out of the contest with the rest of the starters when Brooklyn’s lead grew past 25 early in the third quarter.

In less than a 20-minute span on Tuesday, Dinwiddie had nine points, five rebounds, and four assists which brought him to 18 total stats. Assuming the game on Christmas remains more competitive and Dinwiddie receives an uptick in minutes compared to last game, he should easily cruise over 19.5 total stats.

Boston pulled off the upset over the current favorites to win the Eastern Conference in their season opener on Tuesday night but honestly, I think the books have the wrong team favored. The Nets appear to have the star-power and depth to compete in a seven-game series with the Lakers, while the Celtics have never shown me anywhere close to that same type of fire. This is a letdown spot for Boston. I’ll take Brooklyn -3.