Martin Luther King Jr. Day basketball is back with another full-day slate of NBA action kicking off this afternoon, and VI is getting you ready with some more Best Bets and Game Previews to help handicap all of Monday’s biggest games.

The Bucks come into this contest as a 2.5-point favorite – marking just the second time that the Nets have been listed as an ‘underdog’ against an Eastern Conference opponent this season.

While the total for this matchup sits at 238, which is currently the highest ‘over-under’ clip on Monday’s NBA board by nearly a 10-point margin. 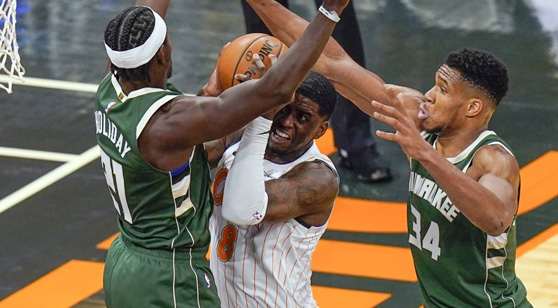 The Bucks have been playing great defense lately and that effort has led to a 4-0 'under' run for bettors. (AP)

The Nets come into this game riding a three-game winning streak with victories over the Magic, Knicks, and Nuggets across that stretch.

James Harden had a monster night in his Brooklyn-debut, racking up 32 points, 14 assists, and 12 rebounds in a 7-point Nets victory over Orlando.

After finishing with the best record in the Eastern Conference last year, Milwaukee has returned to relative mediocrity this season – with Giannis and company already losing a quarter of the amount of games as they did last season.

The Bucks most recent contests resulted in victories over the Mavericks and Pistons, but Milwaukee still failed to cover the spread in both of those contests.

Any matchup information you receive about the Nets and Bucks heading into this matchup has to be taken with a grain of salt, considering Brooklyn just recently acquired a complete game-altering piece in Harden and the Nets are still yet to match up with Milwaukee since the acquisition of Kevin Durant.

But Milwaukee and Brooklyn managed to split a pair of games last year, with both contests falling ‘under’ the current total for Monday night’s contest – OU 238.

The Bucks acquired Jrue Holiday from the Pelicans this past off-season as a desperate attempt to get the reigning MVP, Giannis Antetokounmpo, to re-sign with his current team in Milwaukee. But the pieces of the puzzle just haven’t quite fit together yet for the Bucks, as they continue to rack up the disappointing losses.

One would think that adding lockdown perimeter defender to the mix, like Holiday, would give Milwaukee a significant boost defensively, but instead the Bucks have fallen from 1st in the NBA in defensive rating during last year’s regular season (102.5) down to 7th in the league so far this season (107.4).

Harden was great in his Nets’ debut, compiling his first triple-double of the season on roughly 45% from the field in Brooklyn’s victory over the Magic (32 points, 12 rebounds, 14 assists).

But the real eye-opening aspect of that contest was how fluent Durant looked in the offense with the Beard at the helm – posting a season-high 42 points on 16-26 from the field and 5-8 from 3-point territory.

If Irving returns to the starting lineup on Monday night, it could throw a wrench into Brooklyn’s offense and make things interesting with the whole “there’s only one ball” dilemma.

But ultimately, Brooklyn should now be considered the much better team in this matchup and I expect them to pick up their first statement win under its new construction in this contest.

Irving is listed for this contest as questionable due to COVID-19 protocols. The Nets looked phenomenal in their first contest with Harden in uniform, so it will be interesting to see if they have that same imminent success once Kyrie gets added to the mix.

After failing to reach 22 points in back-to-back games, Khris Middleton finally got back over the hump in the Bucks most recent contest, as the All-Star forward went for 25 points while sinking four out of nine 3-point attempts during Milwaukee’s victory over the Mavericks this past Friday, 112-109.

Prior to his 2-game slump though, Middleton had scored 22+ points in 7 out of 10 contests to start the year and Friday night’s ‘over’ makes it 8 for 11, aside from his first two matchups of this week against the Pistons and Magic.

Back Middleton to have another big game on the scoreboard against a Nets team ranking 5th in the NBA in pace (102.9) while generously being ranked in the middle of the pack defensively (DEFRTG – 109.7).

With Brooklyn’s acquisition of James Harden, followed by an astounding triple-double in the Beard’s debut, I expected the Nets to come into this game as a short favorite over the Bucks – but instead it is Milwaukee boasting the slim -2.5 tag.

I think the books have the wrong team favored in this contest. Give me the Nets +2.5 here.