Boston is in the middle of its West Coast road swing. The Celtics split their first two games, but they will be hard-pressed to finish this five-game stint with a winning record as they will have to play Phoenix and Utah after taking on the Los Angeles Clippers this Friday night.

The Clippers have won 11 of their last 13 games, and they haven’t lost in the Staples Center since January 5. 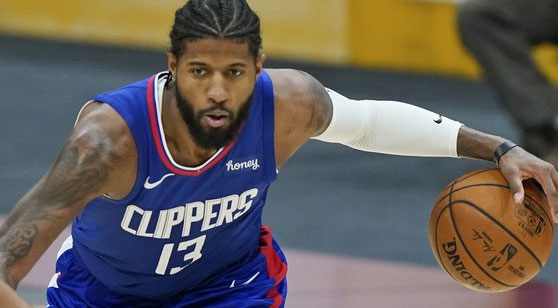 Paul George and the Clippers return home on Friday night to battle the Celtics. (AP)

The Clippers are neck and neck with the Lakers and the Jazz for first place in the Western Conference after the first six weeks of the 2020-21 NBA season. They are 8-2 at home so far, and they have won six straight home games since losing by three points to San Antonio in the Staples Center a month ago.

Los Angeles’ only two losses over the last four weeks were on the road against Atlanta and Brooklyn. The loss to the Hawks was expected considering the Clips were without Kawhi Leonard, Paul George, and Patrick Beverley for that game. Leonard and George were available against the Nets and played well, but Brooklyn’s trio of superstars was too much as James Harden, Kyrie Irving, and Kevin Durant combined to score 90 points in Brooklyn’s 124-120 win.

There was no doubt the Clippers were the better team when they took on the Cavaliers in Cleveland the following night. Leonard and George ended up playing both parts of the back-to-back with the tandem combining to go 22 of 34 from the field for 60 points in a 121-99 win.

Boston is 4-6 over its last ten games. The Celtics only victory over a team above .500 in that stretch came against Golden State on Tuesday. They squeezed out an 111-107 win over the Warriors despite Stephen Curry finishing with 38 points, 11 rebounds, and eight assists.

They weren’t as fortunate the following night against Sacramento. Kemba Walker took the night off, as Jayson Tatum and Jaylen Brown couldn’t do enough for Boston to get the win. Taylor and Brown combined to go 4-16 from downtown in the 116-111 loss on Wednesday.

Tatum is Boston’s leading scorer this season. He is averaging 26.8 PPG and making 47.8 percent of his field goals and 41.1 percent of his threes. Tatum is the team’s second leading rebounder (7.3 RPG), but he doesn’t play inside as often as many analysts want him to given his size and athleticism in comparison to other small forwards. He is averaging less than four trips to the free throw line per game, limiting his effectiveness.

The loss of Marcus Smart for at least the next week has the Celtics struggling on defense. Boston allowed Golden State to make 40 percent of its threes on Tuesday, and Sacramento put up 116 points against Boston on Wednesday. The Celtics don’t have good perimeter defenders currently with Payton Pritchard out too and Walker is still not at 100 percent.

Walker is struggling from the field. He is making just 36.6 percent of his field goals and 30 percent of his threes. This will be just his eighth game this season, as he has been dealing with knee issues.

Leonard is playing at an elite level. He leads L.A. with 26.2 PPG while shooting 50/40/90 from the field. The two-time NBA Finals MVP remains one of the best defenders in the league when he is locked in, and we have seen him take the court more often than he did the last two seasons with more built-in rest in this year’s schedule.

Beverley hasn’t been available for almost two weeks due to a knee injury. The Clippers' point guard is likely going to sit on Friday night as well, so Reggie Jackson will be asked to start in his stead once more. Jackson hasn’t been bad, sinking 44.1 percent of his field goals and 38.6 percent of his threes, but he doesn’t contribute much else and is a downgrade from Beverley in terms of defense too.

The Clippers’ guards will be the difference makers in this game. Although Beverley isn’t expected to play, George and Lou Williams can make a big impact against Boston’s backcourt. Leonard should be able to contain Tatum, so it’s going to be tough for the Celtics to create enough offense for the win.