We are now in the stretch run of the NBA regular season. There are less than four weeks left to play, and almost every team is either jostling for playoff position or trying to be one of the 20 teams that will at least make the play-in round.

The Denver Nuggets have likely ensured they will be one of the top six teams in the Western Conference with a 37-20 record coming into Wednesday night’s title with the Portland Trail Blazers.

Meanwhile, Portland is trying to hold on to one of the top six seeds in the conference after a recent downturn. 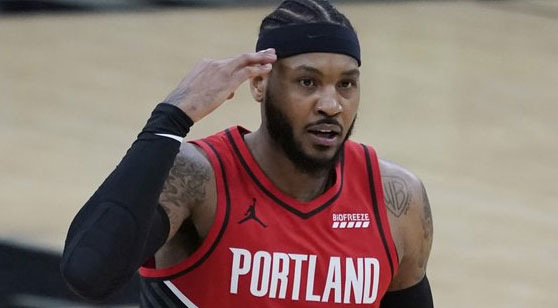 Carmelo Anthony and the Blazers play with no rest on Wednesday night as they welcome in division rival Denver. (AP)

Portland went 8-4 from the All-Star Break until the end of March. The Trail Blazers didn’t play the toughest schedule during this three-week stretch though, and we have seen them struggle in earnest as their schedule became more difficult in April.

The Blazers are just 3-7 in their 10 games this month with two of the three victories coming against two teams that are tanking (Detroit and Oklahoma City).

Their only victory against a decent team came last Friday when the Blazers took down the San Antonio Spurs by one point. However, they only lost by a single point to Boston last Tuesday and the L.A. Clippers last night, so they have been close to coming off this most recent slide with three of their last four games decided by a point.

Paul George hit two free throws with under five seconds to play to give the Clippers a 113-112 win over the Blazers on Tuesday night.

C.J. McCollum led Portland with 28 points, but his potential game-winner didn’t fall, and the Clippers escaped the Rose City with a win.

Denver continues to play well despite the loss of Jamal Murray. The Nuggets’ star guard suffered a torn ACL against Golden State on April 12, and he will miss the rest of the season and the start of next year’s campaign too.

This team has won 11 of its last 13 games and three in a row since Murray’s injury. Nikola Jokic has been incredible during this run, and he may have locked up the 2020-21 NBA MVP with his play over the last month.

Jokic had a monster game against Memphis on Monday night. The big man led the Nuggets past the Grizzlies with 47 points, 16 rebounds, and eight assists in a 139-137 double overtime win. He played 45 minutes in that game, so he needed a day off following that performance. Jokic went 20-31 from the floor in the victory.

Jokic is posting incredible numbers with Denver this season. The fifth-year center is on his way to becoming one of the best second-round picks of all-time.

Given the injuries to Murray and Monte Morris, the Nuggets needed to add depth at point guard. That led to Denver signing Austin Rivers to a ten-day contract, and he is expected to make his debut tonight. Rivers played sparingly with the New York Knicks up until mid-February, but it’s been two months since he last took the court.

Porter has scored at least 20 points in six straight games, and he is making 55.2% of his field goals and 37.7% of his threes this month. He is a strong rebounder for a small forward, so he could post a double-double against undersized Portland on Wednesday night.

Damian Lillard has missed Portland’s last three games due to a hamstring injury. He sustained the injury in last week’s loss to Boston, and he is considered a game-time decision for tonight’s game.

The Blazers have certainly missed their star guard, as he leads the team with 28.7 PPG and 7.7 APG. Few players can create and get to the line like Lillard, and this line will shift a few points depending on his presence or absence.

Lillard’s return would be additionally beneficial since McCollum’s shooting woes have continued since his return to the lineup last month. McCollum has not had the same shooting touch, and that has affected his confidence at the line too. He is making just 60.9% of his free throws in April, well off his career 81.8% average.

The Blazers acquired Norman Powell from Toronto for Gary Trent Jr. and Rodney Hood at the trade deadline. Powell has been the No. 2 scorer with Lillard sidelined, notching 20 points in three of his last four games. He is making 44.9% of his field goals and 34.6% of his threes since joining the team.

Jokic finished with 41 points in a 111-106 victory over Portland in the only previous meeting between these two teams this season.

Jusuf Nurkic will be in the lineup this time though, so Portland has a decent chance of pulling off the upset if Lillard plays.