Western Conference postseason action will resume on Thursday night with Suns-Lakers Game 6 set to finish off TNT’s nationally televised doubleheader for the evening.

So, VI is getting you ready with a variety of betting resources to help handicap both pivotal matchups.

After getting pummeled by 30 points on the road in Game 5, the Lakers travel back to Los Angeles as a three-point favorite over the visiting Suns ahead of Game 6 – marking the fourth time Phoenix has been listed as an underdog in this series.

The over-under for this contest is currently stationed at OU 207, which is the first time the total has stooped below 210 in this first-round series – thanks to the first five events containing a lowly average of 199 points per game in them. 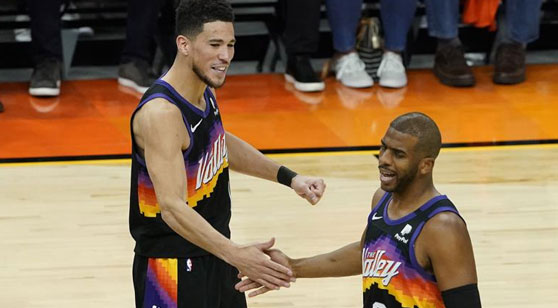 Devin Booker and Chris Paul look to lead the Suns past the Lakers in Game 6 on Thursday at Staples Center. (AP)

Phoenix entered the second half of the season with its sights set on the first seed in the conference down the homestretch – and despite falling one game short of their ultimate goal, the Suns still gave Utah a run for its money in a race that looked to be wrapped up pretty early on.

It appears the Suns may have been the taller team for the task in this series though – considering Phoenix has the defending champs on the ropes heading into Game 6, and the Jazz have been relatively underwhelming in their first-round matchup against Memphis so far.

Los Angeles flat-out couldn’t shoot in Game 1 against the Suns, as the Lakers tallied just 90 points on 43% from the floor during their series-opening loss – which was a pitiful team effort led by Anthony Davis, who scored just 13 points on 31% from the floor across 38 minutes of action.

Davis and the defending champs emphatically bounced back with a statement win in Game 2 though, as Phoenix experienced extensive issues defending L.A.’s big man in the post throughout the contest – allowing the eight-time All-Star to go for 34 points while attempting 21 free throws on the way to the Lakers’ series-evening victory.

Los Angeles managed to grind out a second straight victory over the Suns in Game 3 via the foul-line (26-30 FT). The Lakers’ struggles from beyond the arc remained prevalent during that event though – as LeBron James and company knocked down just seven three-pointers at a 25% clip on the way to taking a one-game series lead at the Staples Center.

After being listed as questionable ahead of the following contest due to a sprained left knee, Davis was forced to exit Game 4 with what appeared to be a different injury concern than reported prior to the game – as the eight-time All-Star left for the locker room at halftime grasping at his groin area and never returned.

As of Wednesday evening, Davis’ status for Thursday’s elimination game remains foggy. I have to imagine that the superstar forward will do everything in his power to participate in Game 6 though – considering the Lakers got pounded by 30 points in Game 5 this past Tuesday without him.

The Suns were victorious in two of three matchups against the Lakers during the regular season – with two of those contests cruising 'over' the total at an average of 225.5 points per game, and the other falling 20 points short of that previously mentioned average (111-94).

James and Davis both didn’t participate in the other matchup between these teams though. So, you can pretty much toss it out of the equation while considering your betting options in this first-round series.

But for what it is worth, the matchup that took place during L.A.’s extensive superstar-less period contained 205 points – as the Lakers contributed just 94 of those at a 41.2% clip on the way to the Suns’ second double-digit victory over Los Angeles on the year.

The Suns concluded their regular-season campaign riding an impressive 9-3 stretch that fell just one victory short of stealing the top seed in the conference from Utah during the final weeks before the start of the playoffs.

Unfortunately for Phoenix though, that one-game differential ended up landing them this tough first-round matchup against the defending champs – as opposed to the Jazz squaring off against a Memphis squad that hasn’t made the playoffs since 2017.

In terms of scoring volume, Phoenix finished up the regular season owning the top over-percentage in the Western Conference – highlighted by the total going 'over' at a 42-30 clip in Suns’ games this year (58.3%).

The pace in this series seems to be leaning with Los Angeles on the low-scoring side of the spectrum though – considering the five postseason events between these teams have contained an average of 199 points per game scored in them.

After struggling for months due to the extensive injuries within their superstar-duo, the Lakers finally got healthy towards the end of the regular season and started to show signs of life down the stretch – but still, several unanswered questions surrounded Los Angeles heading into the play-in tournament.

The Lakers appeared to settle those injury discussions during their pivotal play-in matchup against the Warriors, as Los Angeles pulled off the one-possession victory behind some phenomenal defensive displays and a big-time triple-double from King James – securing the seventh seed in the conference and a first-round matchup against Phoenix.

Los Angeles appears to have caught another case of the injury-bug in this first-round series though – considering Davis sat out with a groin issue during the Lakers’ 30-point loss in Game 5, and the superstar’s status for Game 6 might end up being determined by how he feels in shootaround before Thursday elimination game in the Staples Center.

Regarding the total, betting the ‘over’ in Lakers’ games has played at the worst clip in the league this year – with the total going over the number in just 39.4% of matchups containing Los Angeles during the regular season.

Los Angeles’ pattern of low-scoring events has stayed alive throughout the playoffs too – highlighted by 'under' results in five of six Lakers’ matchups since the conclusion of the regular season, and Game 2 in this series probably pushing at OU 211, depending on your book (109-102).

Despite L.A. getting pummeled by 30 points in Game 5 on Tuesday night, King James still managed to post phenomenal numbers from beyond the arc over the course of the bitter event – knocking down 6-of-10 long-range attempts during the blowout loss, giving him an average of 4.3 made threes’ per game across the Lakers’ first three road-matchups in this series.

I’ll back LeBron to stay hot from downtown here, as the Lakers are probably going to need another extraordinary shooting performance from him in this event to provide L A. with a realistic chance of forcing a Game 7 in Phoenix.

After losing by 30 in Game 5 during the absence of Davis, it appears LeBron’s superstar counterpart is gearing up for a quick return ahead of Thursday’s matchup – and rightfully so, considering the Suns have officially pushed the defending champs to the brink of elimination, with L.A. needing two straight wins to advance past Phoenix.

I’ll back the Lakers to force Game 7 here, as I still think L.A. is the better team in this matchup with its best-five on the floor – and it’s starting to look like that will be the case on Thursday night.