The reigning NFC North Champions, the Green Bay Packers, will visit an empty U.S. Bank Stadium in Minnesota on Sunday afternoon to take on Kirk Cousins and the Vikings.

Minnesota will need more than the 10 wins they tallied last season if they want a chance to compete for the division crown with Pack in 2020.

Despite posting a 13-3 record and earning a bye in the first round of the NFC Playoffs, Vegas is leaning towards the home team in this contest as Green Bay heads into its first regular season game as a two and a half-point underdog.

The total for Saturday’s contest between the Packers and Vikings has fallen to OU 45 due to early money coming in on the ‘under’ as these teams combined for an average of just 34 total points per game in their matchups last season. 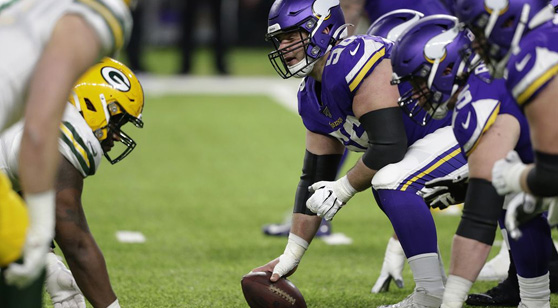 The NFC North will heat up in Week 1 when Minnesota hosts Green Bay in a battle of expected playoff contenders. (AP)

The Packers and Vikings had their two annual division clashes last season and this time around, Green Bay reigned victorious in both, as Matt LaFleur quickly became the most popular man in Wisconsin by running the table in his first six division-games as the Packers’ head coach.

The first matchup between these teams last season was all about Dalvin Cook as he went for 191 total yards and a TD in the contest – but it was not enough to overcome Kirk Cousins’ two crucial interceptions as the Packers cruised to a 21-16 finish.

The second time Green Bay and Minnesota met up last year, Cook sat out with an injury, and the Vikings looked like they were churning in quicksand on offense for the bulk of the game as they failed to muster up 175 yards of total offense in their second loss to the Pack on the year.

There are some rumors floating around regarding a Cook-holdout for a contract extension which would undoubtedly throw a wrench into this game – but as of now, it looks like he is a go for Week 1 and we should have a great game on our hands to open the NFC North race this year.

Packers vs. Vikings
Handicapping the Side

The spread for this game makes no sense to me which is probably why I am electing to stay away from it, although my gut is telling me to just go ahead and back Green Bay.

The Packers won and covered a hypothetical five-point spread in both games against Minnesota last season, and now head into their Week 1 matchup against them as underdogs in a relatively neutral atmosphere.

Not to mention the Vikings just got rid of Stefon Diggs, who was responsible for over 21% of the Minnesota target share last season. There are expected to be some growing pains in the Minnesota receiving core as it tries to compensate for the loss of Kirk’s most dangerous target.

The Vikings are two and a half point favorites on Sunday, which feels like a trap – if you are going to pick a side, take the Pack money line.

The NFC North is notorious for playing hard-nosed, defensive-minded football, but its teams have inevitably strayed away from that over the years with bullet-slingers like Matthew Stafford and Aaron Rodgers being drafted into the division.

The Packers and Vikings went back to their roots though when Coach LaFleur took over in Green Bay, as his team got it done by holding Minnesota to an average of 13 points per game in their matchups last season.

We are probably looking at potentially one of the lowest scoring affairs of the weekend, as I think there is a good chance 21 points wins this football game between division rivals planning on playoff contention.