Two teams off impressive wins – for very different reasons – in Week 1 meet in the Pacific Northwest on Sunday Night Football, with the Bill Belichick/Cam Newton era looking to do something the Belichick/Brady era never did: win their first two starts together.

Their first start together last week had more good then bad, and they had a lot in common with those first Belichick/Brady days in that it's about stout defense and being able to run the ball.

We will still likely see a bit of push-pull between the two of them wanting to try and please the other one in getting to know one another's strengths, and this first road test should be a good one against Seattle.

The Seahawks rode the play of another spectacular game by QB Russell Wilson (31/35 for 322 yards and 4 TD) to a rather comfortable 38-25 win. Defensively they could have been tighter late, but that's easily excusable in Week 1 of a season with no preseason, but how they react to not having fans around if the air there is even good enough to play.

That's always been a huge bonus for the Seahawks over the years, and as we've seen from a sport like golf restarting without fans, sometimes it's the superstars and the ones that are used to all the ambient noise that are actually hurt the most. 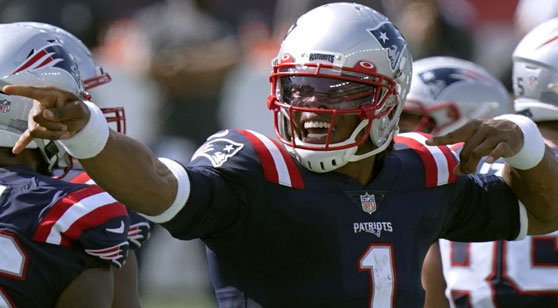 Cam Newton and the Patriots are short underdogs as they travel west to face the Seahawks. (AP)

Cam Newton and Bill Belichick might be new as a duo together, but the Seattle Seahawks defense has had extensive experience in big games against both of them over the years.

I would expect Pete Carroll and company have a pretty good idea of what to expect from both of them, and regardless, New England's attack is still going to be far from a well-oiled machine.

New England is always going to be as prepared as they can on defense for any road game, and in a season where it already appears as that will be the relied upon unit for them this season, they'll have a plan for Russell Wilson.

It's going to be a hell of a lot easier for New England's defensive signals to get communicated in this environment and Belichick will always find a way to work that to an edge.

And let's not forget about the air. If it ends up being good enough to play, it's still not going to be good, and how long would you want to be out there running around playing football and chewing the air? Run the ball and get out of dodge.

Belichick has no problem relying on the defense while the offense got greased up even with a guy in Brady who knew it just as well as himself.

Can only go 'under' here.

Patriots vs. Seahawks
Handicapping the Side

As much as going 'under' makes the most sense on the total for me, the number is still low enough where one of those magical Russell Wilson plays slides it over late.

It's probably worth an average unit risk on the 'under' to watch that happen, but it actually makes backing Seattle on the side an even stronger play in my opinion.

Granted, Seattle may not even need the spectacular from their QB to get by the Patriots in this spot, but even Wilson's “average” games are turning out to be some of the best performances of the week over the past 12+ months.

New England's still going to work themselves into figuring out themselves, and in a year where the normal prep time just hasn't been there for any team, a long tenured team and system like Carroll and Wilson have relative to Belichick/Newton should be able to be worked into an advantage. It likely shows up in execution.

But when you realize that Seattle is on a 11-0 SU run in home openers entering this contest, and the last three times they closed shorter than a TD favorite they've gone 3-0 SU and won each game by double digits (Dallas 2018, GB 2014, SF 2013).

Just way too much to like about them on the field in this spot, that unless they get completely spooked by not having fans, they should win this game comfortably too. But having already played last week in Carolina, that possible effect is very much negated.

A 2-2 September is so often a reality for Belichick teams, and the record books can't show that the Belichick/Newton era stayed undefeated longer then when Brady was there.