After losing by two touchdowns to Kansas City on the first night of the 2020 NFL season, the Houston Texans will host the top-seed in the AFC from last year’s playoffs, the Baltimore Ravens.

The reigning MVP, Lamar Jackson, picked up right where he left off in Week 1 against the Browns, as he compiled 320 yards of total offense and 3 TD’s in the Raven’s 38-6 rout of Cleveland. Baltimore is expected to be tested a little more this week as John Harbaugh’s team heads into Week 2 as a seven-point favorite against Houston. 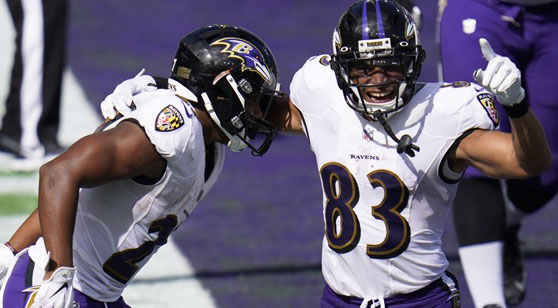 The Ravens' offense rolled past the Browns last week as Baltimore heads to Houston on Sunday. (AP)

Vegas aimed high with the total for this duel between AFC playoff contenders, listing the opening ‘over-under’ for Houston-Baltimore at OU 54.5.

The public disagrees with this high clip though, as a heavy dose of ‘under’ tickets coming in throughout the week has pulled the total for this game down to OU 50.

The total for this contest opening as the highest on Vegas big boards makes sense to me, but I understand why it has plummeted so low throughout the course of the week. I would probably back the ‘under’ too if the total still sat at its opening line of OU 54.5.

The Ravens and Texans scored 38 and 20 points in their respective Week 1 matchups. But that is not very promising for ‘over’ bettors as these teams barely cleared this total in Week 1 while squaring off with the talent-depleted Browns and Chiefs defenses.

When bullet-slingers like Watson and Jackson take the field against each other, there is obviously an inevitable chance they will light up the scoreboard and create some fireworks – but if I were a ‘total bettor’ in this one, I would lean with the ‘under.’

The last time these teams met up in Baltimore in 2019 it was a terrible disappointment to say the least. Quarterback DeShaun Watson and a receiving core led by DeAndre Hopkins failed to score anything more than just one garbage-time touchdown over a full 48 minutes of football against the Ravens in what was anticipated to be a clash between offensive powerhouses in the AFC.

To make things worse, Lamar and company poured nearly 500 yards of total offense and 4 TD’s on the dumpster-fire that was already the Texans' offense in this game, allowing Baltimore to cruise to a 41-7 victory.

Typically, the Texans front four is relatively successful at stopping the run, but in their matchup with Baltimore last season, Mark Ingram and Gus Edwards rushed the ball 21 times for a combined 160 yards on the ground. It is completely inexcusable when everybody in the building knows they are going to run the ball up 30+ points.

Houston was without J.J. Watt in that game though – there is no doubt he will need to make his presence felt this time around if the Texans want to get back to .500 on the year with a win on Sunday.

Ravens vs. Texans
Handicapping the Side

There are so many reasons to side with the Ravens in this game, but we’ll start with the fact that Baltimore is the much healthier team heading into the matchup, having no significant injuries to report out of camp so far this week.

The Texans offense also appeared stagnant for the majority of the first half in their matchup with the Chiefs, and as much as I would love to applaud Patrick Mahomes for his greatness, there is no excuse for not being able to move the ball against the Kansas City defense.

Watson is going to have a much more difficult task laid out in front of him Week 2, as he goes up against last year’s 3rd ranked defense in the NFL, and I am somewhat worried about this offense getting completely stifled again like they did last season against Baltimore.

The Ravens are not necessarily my pick to come out of the AFC this year by any means – I am just going to need to see a lot more from Houston’s offense without Hopkins in it before I back them against an elite-caliber defense this year.

The Ravens dodged the injury-bug for the most part in their first game, but some big names highlight the injury report for the Texans heading into Week 2. J.J. Watt is questionable with a hip issue, which is somewhat encouraging considering it is not a reaggravation of his pectoral injury from last season.

Brandin Cooks and Duke Johnson are both listed as questionable for Sunday’s contest – look for Watson to look Will Fuller’s way a ton, especially if Cooks is unable to go, as the Notre Dame speedster received over 30% of the Texan’s target share last week.

After re-watching some tape of last year’s matchup between Houston and Baltimore, it is literally impossible to side with Texans in this game. Bill O’Brien’s team got absolutely man-handled on both sides of the ball and basically got laughed out of the building by a team that was thought to be nearing the Ravens’ talent-level in the weeks leading up to this game.

Give me the Ravens -7 here as I believe Houston has not made nearly enough changes to its offense in order to keep up with a real title-contender this season.