There is nowhere to go but up in the passing statistics for the Denver Broncos this week, but they might need to produce the biggest disparity in passing yards between two games just to have a shot to keep up with Patrick Mahomes and the Chiefs.

KC looked like they could pick their score in that 1st half vs Tampa Bay last week, and then played the role of the Hare as the tortoises and their 43-year old QB did what they could to catch up and sneak through the backdoor.

The Chiefs are the expected big favorites in their second meeting with Denver this year, beating the Broncos 43-16 in the first meeting. It was a -7 price tag as road favorites for Kansas City that day, a number that's doubled now that they are at home and have done nothing but go 4-0 SU since that game.

It's been three straight ATS defeats for the Chiefs though with wins of 3, 4, and 2 points the last three weeks, and giving up late scores has happened in all three of those games. That's a dangerous game to play when you know the Chiefs are going to be a highly popular side regardless and have a big number to leap over.

A Chiefs outright win is almost a given here, so any case for Denver is really answering the question of how many points is too many. These late scores have been behind this 0-3 ATS skid the Chiefs have been on, but if they looked like they could pick their score against the Bucs, thinking they could do the same against Denver isn't a stretch. 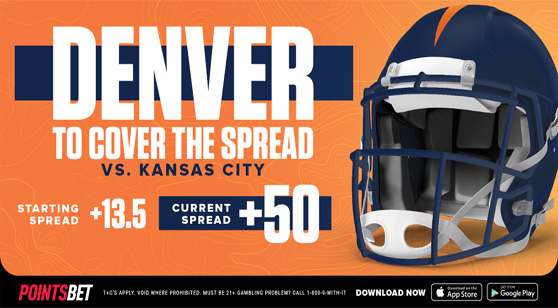 A 43-16 score in the first meeting is just more suggestive evidence that Kansas City could very well pick their score here. Four turnovers by the Broncos that day (2 INT, 2 fumble) was the main reason that game got away from Denver in a hurry. Mahomes only had 200 yards passing with a single TD that day, that's how dominant KC was in all phases of the game.

Not sure we see that many turnovers in the return match, as Denver would love to restore at least part of their image after what they were forced to go through last week. Easy to burn that film the minute it concluded filming, and having a relatively normal practice week from here on out should only help their chances.

They've still got Drew Lock playing QB though, and relative to the rest of the league he still resides near the basement no matter how you cut it. Kansas City's defense rattled him all game long in that first meeting, and shut him down early and build a big lead in the process, only allows the Chiefs to bleed the clock dry in the second half.

That's where sweating the results on the spread may be more of a workout, opposed to the total, where Denver's run of three consecutive 'unders' could easily get stretched to four.

Going 'under' this number is really the only way I'm comfortable looking at this game, and just hoping that the Chiefs are able to take their foot off the gas relatively early.

KC has scored at least 32 points in ever game following a sub-30 effort from the Chiefs this year, which has to concern 'under' looks, but it's still the Denver offense having the ball for (presumably) half the game, and only four of the 11 Broncos games this year have hit the 50-point mark.

Broncos vs. Chiefs
Handicapping the Side

In spots like this it doesn't usually take much to put me on the side of the underdog and hoping for at least the possessions and clock to work out just right so a garbage time TD to get inside the number is the final score of the game.

And off two “tough” games (Las Vegas, Tampa Bay), and two “tougher” games up next (at Miami, at New Orleans) for Kansas City, the Chiefs by a huge margin as the highly popular side is not something I really want to be a part of.

They already did what they wanted to against Denver without even really needing Mahomes to do much of anything he normally does, so showing up and advancing is all KC is really thinking about here. That's a lot of points to give a division rival in any situation.

But at the same time I'm in no hurry to step in front of KC right now off three straight narrow defeats and facing an opponent they could beat up on to give their starters 15+ minutes of extra rest.

Backing the Chiefs comes with the understanding you'll be on the popular side regardless, and you've got to be fine with doing that as well when it calls for it. Not sure a spread this big against a division rival is the time to put your foot in the sand there if it needed convincing, so passing on this side is just as easy to do.