The St. Louis Blues and Vegas Golden Knights get together Tuesday for the first of eight regular-season meetings.

The Golden Knights (5-1-0) have tasted victory frequently during the early going, including a 1-0 win behind Marc-Andre Fleury last time out on Saturday in Arizona. Head coach Peter DeBoer has been using the goaltender rotation with Fleury and Robin Lehner with tremendous results so far.

The Blues have alternated wins and losses through the first six games, and they're coming off a 6-3 humbling from the Los Angeles Kings last time out on Saturday. In that game, Ville Husso made his first NHL start, giving Jordan Binnington his first rest of the season. The Blues do not employ a goaltender rotation, and Binnington will be back in there Tuesday. 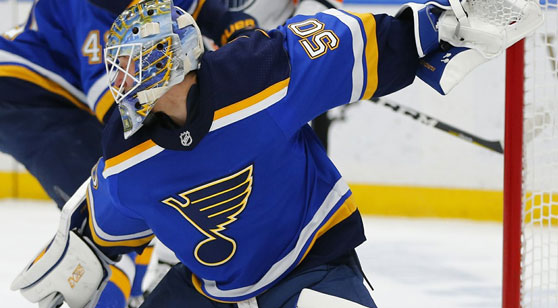 The Blues square off with the Golden Knights in Las Vegas on Tuesday in a West division showdown. (AP)

The Blues were heavy favorites (-195) against the Kings in the second end of a back-to-back Saturday. However, they used Husso in his first NHL start and it didn't go very well as they were double up on their home ice, 6-3. It was the fourth time in six games that the Blues have scored at least three goals, and they enter Tuesday with 2.8 goals per game to rank 19th in the NHL.

St. Louis has really missed Vladimir Tarasenko, who is on long-term Injured Reserve. The power play has been dismal, ranking just 30th in the NHL out of 31 teams. Only the toothless Anaheim Ducks power play, which has yet to strike on the man advantage, has been worse.

Speaking of goose eggs, the Golden Knights were able to keep the Coyotes off the board last time out. They weren't exactly running hot offensively, either, as Vegas won just 1-0 behind Fleury. William Karlsson had the difference maker at 19:17 of the third period, spoiling a potential 0-0 overtime, much to the dismay of Darcy Kuemper.

VGK has been seventh in the NHL with 3.6 goals per game, but they are rather mediocre on the power play, ranking in the bottom third of the league at 25th with an 11.1 conversion percentage. Defensively the Golden Knights have been fire, as the kids like to say, holding the opponent to 2.4 goals per game to rank eighth, while allowing just 25.0 shots per game to rank fourth.

As mentioned, the Blues have alternated wins and losses through their first six games. They're coming off a 6-3 loss against the Kings, so if you believe in those kind of wacky trends, a win is coming on Tuesday.

One thing which has been rather consistent for St. Louis has been the 'over', cashing in four of their past five outings. It's been a mixed bag of reasons, as the Avs got them for an 8-0 win on Jan. 15, while the Blues tossed up four or more goals in the double dip openers against the Sharks and Kings.

That's one thing to remember about this St. Louis side. In the first three matchups of their two-game sets, they have won the opener, and dropped the second end. There's not much to glean in terms of that over/under in those games, as it is both 2-1 in favor of the over in the first end and the second end of the double dip.

Jordan Kyrou leads the team with four assists and six points while turning in 15 shots on goal. He is gaining confidence by the day, and he has been huge picking up the slack for Tarasenko. Kyrou is tied with Robert Thomas for the team lead in helpers. Rearguard Torey Krug, who signed a lucrative offseason contract with the team, has the only power-play conversion after the team started 0-for-14 in that category.

The Golden Knights have tasted defeat just once this season, a 5-2 setback in Arizona on Jan. 22. They bounced back with the 1-0 win last time out, and have won five of six overall. The Golden Knights averaged 4.0 goals per game through the first four outings, all at home, but they have averaged just 1.5 goals per game to split a pair in their first two road outings.

The new captain, Mark Stone, leads the team with six helpers and eight points while showing off a sparkling plus-6 rating. Shea Theodore leads the way with a plus-7 rating, and he is breathing down the neck of Stone with six points while sitting tied with Max Pacioretty for the team lead in goals (3).

A very underrated category is the faceoff wins category, and Vegas has two guys who have been slaying it. That's an especially important category in the offensive zone, affecting the ability to maintain possession and create more scoring opportunities. Karlsson has won 54 of his 97 attempts (55.67 percent), while Colin Stephenson has won 35 of his 65 chances (53.85 percent).