The Chicago Blackhawks continue their two-game set at Bridgestone Arena in the Music City against the Nashville Predators at 7:30 p.m. ET.

The Blackhawks lost 3-2 in overtime against the Predators in the back-to-back opener. After going 0-3 to start, Chicago had won consecutive games against the Detroit Red Wings to come in on a winning streak. While Chicago took the loss, they're still 2-0-2 across the past four outings. The Predators have been strong at home, winning three of their four games at home while getting dusted in two games on the road, outscored 10-2 away from home. At home they're outscoring foes 13-9, going 3-1-0.

Each of the past two games in this series have gone to overtime. 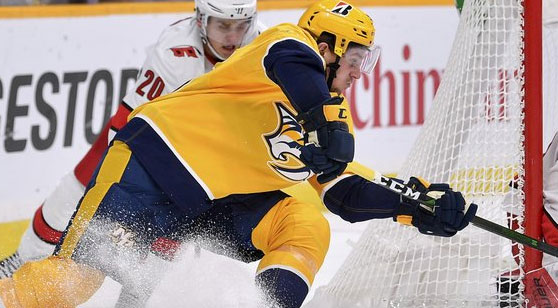 The Predators and Blackhawks finish off their two-game series on Wednesday night in Nashville. (AP)

In Tuesday's game, Dylan Strome opened the scoring with a power-play goal for the Blackhawks, and they took a 1-0 lead to the room after 20 minutes.

Yakov Trenin answered at 4:47 of the second period to tie it 1-1, but Mattias Janmark bounced back to restore the 2-1 lead midway through the second. Mikael Granlund leveled the game 2-2 in the third, and the game ended up going to overtime, when Roman Josi posted the game-winning tally in OT to beat Malcolm Subban.

Subban made 36 saves in one of his better outings of the season. Veteran Pekka Rinne made a rare start, as he allowed two goals on 20 shots to pick up his first victory of the season to move to 1-1-0 with a 2.97 GAA and .863 save percentage.

The Blackhawks have been a lot more competitive in recent days after a tough start, and they're 2-3-2 heading into the rematch. The Predators got back to .500 with the OT win, evening their record at 3-3-0.

The Blackhawks have yet to taste success on the road in five games, but they had another near-miss with the overtime loss, and they were in the game the whole way. For the second straight outing they ended up on the short end of an overtime loss, but the rebuilding Blackhawks are close to breaking the ice for the first time away from home.

Kevin Lankinen has been a godsend, bursting onto the scene with the 'Hawks. He has the team's only two wins, both against the Detroit Red Wings, and he had started the previous three before Subban gave him a breather Tuesday. Look for Lankinen to draw back into the blue ice for Thursday's battle.

Offense hasn't really been the issue for Chicago, as they rank a respectable 11th in the NHL with 3.2 goals per game, and they're third in the league with 31.5 shots on goal. A good reason for their success has been an effective power play, as they rank second in the NHL with a 42.1 percent rate.

The problem has been at the defensive end, as they are 30th out of 31 teams with 3.8 goals allowed. The Blackhawks are allowed 32.3 SOG per game, good for 27th, and their penalty kill has been brutal, too, shutting down the opposing power play at just a 72.0 percent clip. Lankinen has managed a respectable 2.63 GAA, and if anyone is going to pick up a win on the road, it's him. Patrick Kane leads the team with 22 SOG, and he tops the charts with seven points, too.

Chicago enters 0-6 across the past six as an underdog, and they have won just four times in their past 21 road games.

The Predators slapped the brakes on a three-game skid with their OT win. They were just dusted in the Metroplex by the Dallas Stars in two games, getting outscored 10-2. They also lost their most recent game at Bridgestone Arena, falling to the Carolina Hurricanes by a 4-2 count on Jan. 18.

Nashville has had a difficult time of the season at both ends of the ice, which is something we haven't really seen in recent years. The Predators are averaging 2.4 goals per game to rank 27th, and they're also 27th on the power play at just 10.0 percent. The good news is that they're 15th with 30.4 SOG, and they rank fifth on the faceoff at 54.2 percent, an important category which helps them in the offensive zone, creating more scoring chances.

The Predators have had some issues on defense, allowing 3.4 goals per game to check in 25th, and they're dead-last on the penalty kill at 55.0 percent. Defenseman Roman Josi picked up the game-winning tally in overtime against the Blackhawks Tuesday, and he leads the team with 26 SOG. Viktor Arvidsson has registered a team-best five points, while Dante Fabbro tops the charts with a plus-5 rating.

Juuse Saros is expected to be back in the crease for Wednesday's game. He has a 2-2-0 record with a 3.02 GAA and .905 save percentage in his four starts.

The Predators have won four straight as a home favorite, but they're just 4-10 in the past 14 in the second end of a back-to-back. However, Nashville has won five of the past seven meetings overall, and four of the past five home meetings with the 'Hawks.