The St. Louis Blues and Vegas Golden Knights run it back Thursday night for the second end of a double dip after the Blues pulled off the mild upset as road 'dogs on Tuesday, 5-4 in a shootout.

If Tuesday's match is an indicator of how entertaining the eight regular-season meetings with St. Louis (4-2-0) and Vegas (5-1-1) will be, we're going to be in for a real treat this season when these Cup contenders square off.

VGK bench boss Peter DeBoer and the entire coaching staff self-isolated for Tuesday's game, with general manager Kelly McCrimmon taking the reins behind the bench. Members of the Henderson Silver Knights of the AHL joined him to handle the duties, and they handled the situation with aplomb. There has been no official word from the team Wednesday, but it appears we'll get the same setup on Thursday evening. 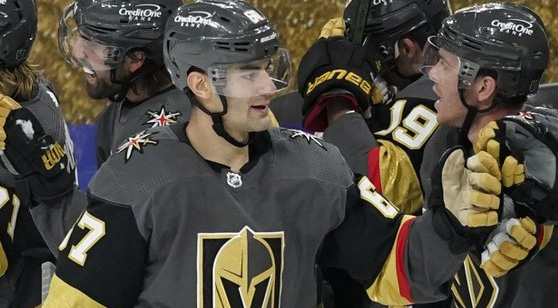 The Blues won a thrilling 5-4 shootout victory over the Golden Knights on Tuesday at "The Fortress", although Binnington might be seeing Max Pacioretty in his sleep. The latter posted a hat trick, including two third-period goals, to force the extra session.

David Perron scored a pair of first-period goals for the visitors, including a rare power-play marker, as the Blues entered the game with just one goal on the man advantage all season. Jaden Schwartz also netted a goal, as did team scoring leader Jordan Kyrou.

In the extra session, Perron also beat Robin Lehner, while Ryan O'Reilly misfired. But Brayden Schenn beat Lehner to send all of the cardboard cutouts home unhappy, giving the Blues the extra point in a thriller.

The 5-4 setback in a shootout was good and bad. The good part was that the Connecticut native Pacioretty doubled his season goal total, giving him a league-high tying six goals, joining Colorado's Mikko Rantanen at the top of the early charts.

The bad news for VGK was that Lehner could not stop the Blues, especially early. He settled down in the third period, but St. Louis deserved the win, and got it, in the shootout. Google Lehner and shootouts from his time in Chicago, and he'll let you know how he feels about deciding games in that manner.

The Blues have alternated wins and losses through their first seven games, following the trend Tuesday with a road win as underdogs. If you're into those kind of coincidental trends, then you'll be slamming VGK on the money line, as St. Louis is due for a loss in the second end of the double dip.

The 'over' connected again on Tuesday, and that's now five over results in the previous six outings for the Blues. The five goals actually tied a season high for St. Louis, matching the five they posted in a Jan. 18 win against San Jose at Enterprise Center.

Barring any unforeseen circumstances, the Golden Knights are expected to start Fleury, who has been stupendous in the crease when called upon. He blanked the Coyotes last time out on Sunday in a 1-0 win, turning aside all 16 of the shots he faced, and he has allowed just three goals on 61 shots in his three starts (all wins).

The 'over' has cashed in five straight meetings in this series, and four of the previous five in Nevada.