The Nashville Predators (4-3-0) and the defending Stanley Cup champion Tampa Bay Lightning (3-2) hook up at Amalie Arena in Tampa, Fla. for the front end of a two-game set. It will also be the first of eight regular-season meetings between these two temporary division rivals.

The Lightning have a couple of players on the mend, as defenseman Eric Cernak and center Mitchell Stephens, depth players, are each considered question marks due to undisclosed ailments.

As far as the Preds are concerned, they also have a key player in rearguard Dante Fabbro nursing an ailment, and he is considered questionable, as well. 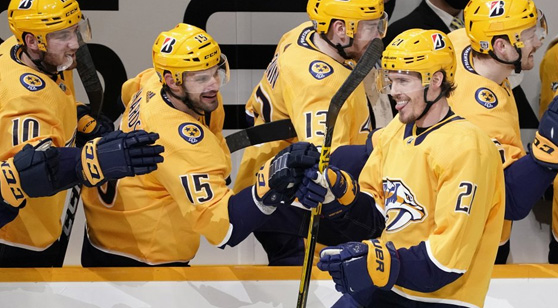 The Nashville Predators are off to a solid start this season but a 0-2 record away from home needs to improve. (AP)

The Predators got all they could handle in a double dip against the Chicago Blackhawks at Bridgestone Arena in the Music City, winning 3-2 in overtime in the first meeting on Tuesday, and 2-1 in a shootout on Wednesday night behind Saros.

The Predators didn’t have any scoring in regulation until Nick Cousins broke through at 5:24 of the third period to break a scoreless tie. Exactly four minutes later Ryan Carpenter of the Blackhawks leveled things 1-1, and the teams headed to the extra session.

As far as the Lightning are concerned, they were tripped up 1-0 in overtime in Raleigh by the Carolina Hurricanes on Wednesday. Vasilevskiy certainly deserved a better fate, as he turned aside 34 of the 35 shots he faced. Unfortunately for Vasilevskiy, he couldn’t stop Martin Necas just 72 seconds into the extra session.

It was a quick hitter to North Carolina for the Lightning, as their game Tuesday was postponed with the Hurricanes dealing with the after-effects of their COVID-19 outbreak. It appears all is well as far as that is concerned, and the Lightning should be good to go heading into their homestand, as the NHL has taken plenty of precautions to insure player safety, etc.

It has been a tale of two seasons for the Predators. They have been sharp at home, going 4-1-0 in their five games at Bridgestone Arena, and they have been outscored 10-2 in a pair of road games against the Dallas Stars. Will they be a brutal road team this season? The sample size isn’t great, but so far the results haven’t been good.

Saros started both of the road games in Dallas, and he was sharp against the Blackhawks last time out. Veteran Pekka Rinne is waiting in the wings just in case Saros struggles, and that veteran cushion is nice to have for the Preds.

These teams played into overtime in Tampa last season on Oct. 26, 2019, with the Preds coming away with a 3-2 win in overtime behind Saros. Of course, he was facing the backup Curtis McElhinney that day, not the Vezina Trophy winner in Vasilevskiy.

The Lightning opened the season on a 3-0-0 heater, outscoring the opposition 13-5. In their two previous games they have had a power outage, lighting the lamp just twice, including their goose egg in Carolina on Wednesday.

Vasilevskiy has started every game to date, and he has not been the problem. He has allowed two or fewer goals in four of his five starts, and he didn’t yield a goal in regulation against the Hurricanes. He has a tremendous 1.98 GAA and .932 save percentage overall.

The Lightning won the Stanley Cup last season, not just because they beat the weaklings of the league, but they took on the heavy hitters and had success, too. The Lightning are an impressive 29-12 in their previous 41 against teams with a winning overall record. They have also successfully defended home ice in 63 of their previous 91 games at home over the past couple of seasons, which is a .692 winning percentage.