The Central Division champion Carolina Hurricanes picked up a 5-2 victory in Game 1 at PNC Arena in Raleigh on Monday night in front of a raucous crowd.

While the score looked like the game was rather one-sided, it certainly was not indicative of the game. In fact, it was tied 1-1 after one period, and 2-2 after two periods. The Predators also managed a 1-0 lead for 87 seconds midway through the first period, courtesy of Filip Forsberg, before Teuvo Teravainen evened things up.

Rookie Alex Nedeljkovic made the start in Game 1, but he struggled a little with his rebound control early on. However, as the game went along, he certainly gained all kinds of confidence, and by the third period he was rolling right along. He ended up with 22 saves on 24 shots, besting Juuse Saros who allowed four goals on 37 shots.

So what does Game 2 hold? Well, expect more of the same. PNC Arena can be one of the loudest buildings in the NHL when Carolina is playing well in the playoffs, and that is certainly the case right now. And, Governor Roy Cooper changed the indoor capacity restrictions, and PNC Arena almost appeared full with 12,000 estimated fans, or about 60 percent of the 19,772 of the arena capacity. It certainly looked to be fuller than that in Game 1. Expect the home crowd to spur the Hurricanes to another victory. 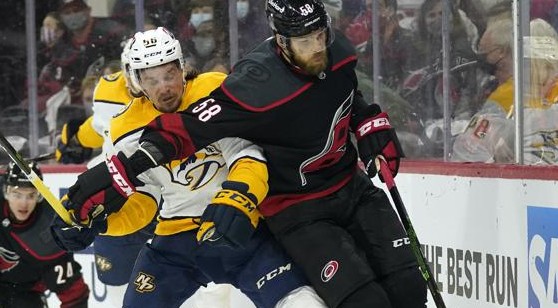 The Hurricanes dominated the regular-season series, winning each of the first six meetings before the Predators won the final two battles in the Music City. Carolina rolled to a 20-3-5 record during the regular season in Raleigh, and it flexed its muscle in Game 1 with a 5-2 win, although they needed a third-period flurry to pull away.

The Predators tried to push the Hurricanes around, dishing out hits and trying to get the Canes involved in the rough stuff. But Carolina has a little more sandpaper than previous seasons, and they definitely have the experience of the past two seasons in the playoffs. They were not intimidated, and they looked like a poised team which could go deep into the postseason.