Boston got the much-needed road win in Game 2, thanks to the stick of Brad Marchand - who also cashed on a goal prop bet. Both he and Patrice Bergeron are solid goal-scoring prop plays for most games, so consider their prices on most nights. Craig Anderson seemed settled in the second period, but ultimately lost which included a head-scratching play in which he left the goal and ran into his own teammate.

Anderson now tends in a venue where the Bruins have won six straight at night. Boston should win this game, but the money-line is a bit pricey. For those who feel the same, there are some markets to consider besides the SU and already mentioned player props.

The underdog has covered the +1.5 puck line in three straight, but that price is typically too expensive. Actually, Boston to cover at -1.5 is plus-value and seemingly more likely than Washington to cover. Taking the Bruins with an alternate puck line of -1 at +128 buys the bettor a safety net, should Boston only win by one point (similar to a DNB for soccer).

Boston at -162 is a fine bet as the Bruins should win, but it is expensive. Consider Boston at -1 for plus-value instead, and back the idea of the home team winning three of the last four meetings played between both squads (and the mentioned home, night trend favoring Boston). 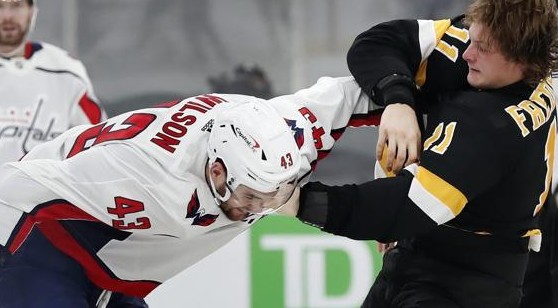 The Boston Bruins have won the first period in seven of their last eight games when playing inside TD Garden. (AP)