The Nashville Predators are in desperate need of a win when they host the Carolina Hurricanes on Friday night. Only four teams in NHL history have ever overcome a 3-0 deficit to go on and win the series, and the Predators don’t want to go up against those odds.

Nashville has only scored two goals in the first two games of its series with Carolina, but the Predators are hoping that a change of scenery will kickstart their offense. 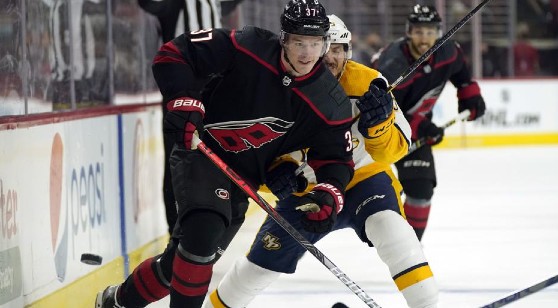 The goal total has gone UNDER in four of the last five games played between the Carolina Hurricanes and the Nashville Predators. (AP)

Carolina was the best team in the Central Division, edging out the two Florida teams to claim the division title. The Hurricanes held off Florida and Tampa Bay to earn a first-round series with Nashville, who had a hard time scoring goals this season.

The Predators’ 156 goals were tied for the lowest among all playoff teams. No player scored more than 13 goals all year for Nashville and defenseman Roman Josi led the team with just 33 points. That ineffectiveness on offense has only increased in the postseason as Nashville hasn’t scored a goal since former Hurricane Erik Haula found the back of the net in the second period of game 1.

Even that goal was fortunate as Haula’s shot went in thanks to a deflection off a Carolina defender. The Predators went 0-3 on the power play in Game 1, and they failed to capitalize on any of their seven power-play chances in Game 2. For Nashville to get back on the board, they are going to have to make the most of their opportunities on the man advantage in Game 3 on Friday.

Nashville converted 17.6% of its power-play opportunities in the regular season. Mikael Granlund and Eeli Tolvanen combined for 11 goals on the man advantage, so it’s these players that the Predators will turn to in order to get the power play going. That’s why head coach John Hynes activated Tolvanen for Game 2 after he was a surprise scratch in Game 1.

Filip Forsberg is the only quality scoring option for the Predators though. Forsberg notched 12 goals in 39 games during the regular season, and he would have led the team in that category if he had managed to stay healthy. He scored the first goal of the series with a bit of a flourish, and that’s what Nashville needs to stay competitive.

The Hurricanes had six players that tallied more goals than anyone on the Predators. They were led by Sebastian Aho and his 24 goals, as he continues to thrive in the NHL. He has now scored at least 24 goals in each of his five seasons in the league, and he lit the lamp twice on Wednesday evening.

Aho is the most talented scoring option, but the Hurricanes come at their opponents in waves. Vincent Trocheck was second on the team with 43 points in 47 games, and the former Florida Panthers’ center has been a welcome addition to Carolina.

Veteran Jordan Staal continues to produce and is one of the best defensive centers in the league. Staal was tied for the team lead with seven power-play goals and he helped make Carolina the second-best team on the man advantage (25.6%) in the regular season.

Rookie goaltender Alex Nedeljkovic has had an excellent season in net for the Hurricanes. He went 15-5-3 with a 1.90 GAA and a .932 save percentage in the regular season, and his hot hand has continued in the playoffs. Nedeljkovic has stopped 54 of 56 shots against the Predators to this point.<.p>