One of the No. 1 seeds (Colorado) is already through to the second round of the NHL Playoffs. The other top seeds in the postseason are struggling though, and the Pittsburgh Penguins are in serious danger of being upset by the New York Islanders.

Pittsburgh was completely outplayed by Barry Trotz’s Islanders on Saturday. The Penguins didn’t show much life in a 4-1 loss in Game 4, taking a lot of unnecessary penalties while getting consistently out-hustled by the gritty Isles. They can’t afford another lackluster performance now that this is a three-game series.

Ilya Sorokin is likely to get the start for the Isles on Monday after his solid performance in place of Semyon Varlamov. Sorokin has outplayed Tristan Jarry in net, and his play will lift the visiting Isles past the Penguins. 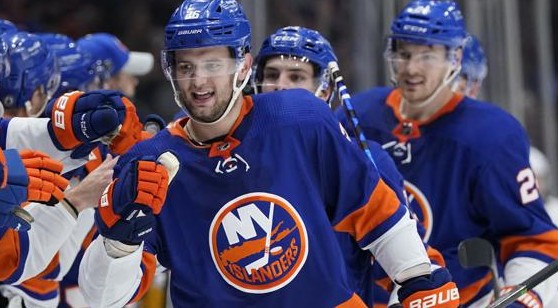 The underdog has covered the +1.5 puck line in four of the last five games played between the Penguins and Islanders. (AP)

After singing Evgeni Malkin’s praises prior to Saturday’s game, we saw the other side of the coin when it comes to the superstar in Game 4. Malkin was easily rattled by the Isles, and they were able to throw the future Hall of Famer out of rhythm.

He committed three of the first four penalties on Saturday, and Malkin didn’t register a single shot on net in the loss. He will need to re-focus himself away from the side antics on Monday night. It hasn’t been the best series for Pittsburgh’s other superstar either.

Sidney Crosby had a goal in Game 1 last weekend, but he has been held without a point in each of the last three games. Crosby is shooting the puck with a total of 14 shots through four games, yet the two-time Hart Trophy winner has not made much of an impact.

One of the few Penguins that has played well is Jeff Carter. The 36-year-old veteran was acquired from Los Angeles near the end of the season, and he has paid off much better than some of Pittsburgh’s recent trade deadline acquisitions. He had nine goals in 14 games with the Pens, and he is the only player on the roster with multiple goals this postseason.

Kris Letang had a fantastic performance in Game 3 with one goal and two assists. However, that was his only game with points in this series. Letang is Pittsburgh’s best defenseman yet he has been somewhat taken out of his rhythm with a penalty in each of the last three games. He will need to get going on Monday.

Pittsburgh’s special teams must perform better too. The Penguins have only tallied one goal on their eight power play opportunities, while the Islanders have converted on three of their 12 chances. The Isles have played better than expected in this series. They aren’t committing the same silly penalties we are seeing out of the Penguins, and they are effectively rattling a more talented team.

Cal Clutterbuck is going an excellent job in this regard. Clutterbuck has frustrated the Penguins with some of his talking and antics, and he has drawn multiple penalties already in this series. He has made himself a nuisance setting up in front of the net, and he could find a goal for his troubles on Monday.

We haven’t seen a ton out of Mathew Barzal in this series, but he should be more of a factor in Game 5. The Islanders’ leading point scorer in the regular season has yet to score in the playoffs. Barzal passed up multiple good looks on Saturday in order to try to set up his teammates, leading to some consternation from Trotz and others because he was trying to do too much. Look for that to change tonight as Barzal takes more chances himself.