The Maple Leafs bounced back nicely in Game 2 at home, as five different players etched their names onto the scoresheet with goals. It was a nice rebound after a stunning 2-1 home loss in Game 1, the game where John Tavares exited with a serious upper-body injury. That injury sort of stunned the Leafs, and cast a pall over their opener in this series.

Jack Campbell allowed just one goal on 23 shots on Saturday, posting his first career playoff victory. That was quite a bit more in line with his regular-season showings against the Canadiens. He had a 4-1-1 record, 2.16 GAA and .918 SV% in six regular-season starts against the Habs.

Carey Price looked good in Game 1, returning from a month-long absence due to a concussion. He kicked aside 35 shots while allowing just one goal in the win. However, four players beat him in Game 2, while Alexander Kerfoot also notched an empty-net goal. 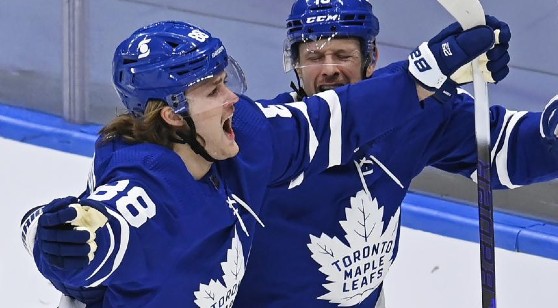 The Toronto Maple Leafs won Game 2, 5-1, snapping a three-game losing streak and tying the series at 1-1 against Montreal. (AP)

Home-ice advantage in the North Division playoffs has been rather overrated. The Winnipeg Jets did push past the Edmonton Oilers on Sunday, but home teams are just 2-3 through five games in the division. That's because home-ice advantage is mitigated with the lack of fans, creating a rather sterile environment which plays more like The Bubble last summer.

So many people are making a big deal about the Canadiens wrestling home-ice advantage from the Leafs in Game 1, but it's a rather overblown development. The only difference between playing in Montreal and Toronto right now is the dressing room, geographic location and color of the sweaters.