The last time it was wheels up for the Hurricanes heading out of town, they held a 2-0 series lead, and it looked like Carolina might make quick work of the Nashville Predators. The Predators didn't exactly blow them out, winning a pair of double-overtime decisions, but the series shifts back to Raleigh with the series tied 2-2, and now essentially a best-of-three.

Carolina still remains in the driver's seat, as they will play Game 5, and potentially a Game 7, in front of its raucous crowd of approximately 12,000 fans at PNC Arena, but there is a sense of nervousness, at least among fans, as it's even again. But the home team has won 10 consecutive meetings between these two southern teams, and the general feel is that the streak continues.

Offense hasn't been a problem for the Hurricanes, as they have managed three or more goals in each of the four playoff games, averaging 3.8 goals per outing. But the Predators racked up a total of nine goals on home ice, and their confidence is certainly high after the pair of thrilling double-overtime victories. 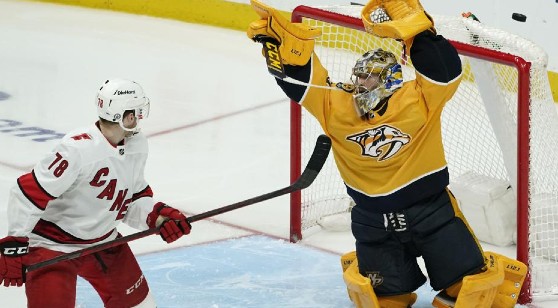 The home team has won 10 straight games played between the Nashville Predators and the Carolina Hurricanes. (AP)

While Nashville was able to scratch out a pair of double-overtime wins at home, they haven't proven they can win on the road. They're just 2-6 in the previous eight games on the road, and they're 3-7 in the previous 10 playoffs games as an underdog, while going 0-4 in their previous four as a road 'dog.

On the flip side, Carolina has managed 22 victories across their past 30 home games including wins in Games 1 and 2 by a combined score of 8-2. The Hurricanes have also registered a whopping 55 wins across the previous 80 as a home favorite, so they're definitely not a fly-by-night team, showing some success over the long haul. They'll snap back on track on home ice in front of their crazy fans on Tuesday night.