The Toronto Maple Leafs returned the favor in Game 3, winning on road ice by a 2-1 score, which is the same score the Montreal Canadiens won by in Toronto in Game 1. The Leafs have officially snatched home-ice advantage back from the Habs, although it's a little bit of an overrated thing in this year's North Division playoffs with no fans in attendance.

Goaltenders Jack Campbell and Carey Price matched donuts in the first period, and all of the scoring came in the second. William Nylander scored a goal for the third consecutive game, as he continues to pick up plenty of slack after the injury to John Tavares in the series opener. Nick Suzuki had the equalizer later in the period, before Morgan Rielly responded with what stood up as the game-winning tally.

Now, the Leafs and Canadiens play on the second end of a back-to-back situation. It's a little more concerning for Price, who is just three games back from a month-long injury due to a concussion. In addition, the Canadiens are just 1-4 in their past five when playing on no rest, and they're 0-4 in their past four in the fourth game of a 4-in-6, or four games in six days, situation. 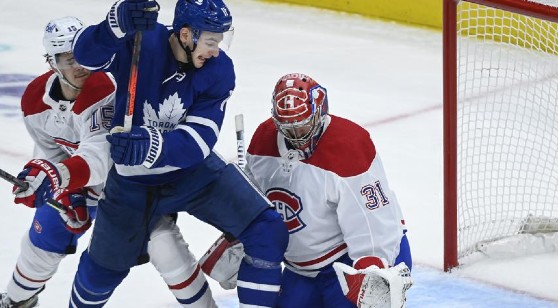 Being at home hasn't really mattered much so far, as the road team has won two of the three games so far in this series. That's likely due to the fact the game atmosphere has seemed more like the bubble last season, rather than a true home game with raucous fans and crowd energy similar to playoff home games in the United States.

The Canadiens will be looking for a bounce-back in Game 4, as they try and avoid a 3-1 series hole before heading back to Toronto. The good news is that they're facing a goaltender with just two career playoff wins. The bad news is that Jack Campbell has earned both of those victories in the past two games. We might see a little more offense with some tired legs thanks to the quick turnaround, but the game result should remain the same.