The second-round series between the defending champion Tampa Bay Lightning and the Southeast Division champ Carolina Hurricanes kicks off Sunday afternoon at PNC Arena in Raleigh, N.C., and this series figures to be one of the most entertaining of the round.

Both of these teams won their previous series in six games, with the Lightning getting by the in-state rival Florida Panthers, and the Hurricanes topping the Nashville Predators in a series which was a lot closer than many fans would have liked.

These teams split their eight-game series during the regular season, with the Hurricanes going 3-1 in four games at PNC Arena against the Lightning. Carolina outscored Tampa Bay 11-7, with the UNDER edging the OVER 2-1-1 in those four games in Raleigh.

The Hurricanes rolled with rookie Alex Nedeljkovic in the crease against the Predators, and he did a fine job winning his first-ever series. For those who feel he could be overmatched against the Lightning, he was a rather impressive 2-1-0 with a 1.02 GAA and .962 SV% in three regular-season starts against Tampa Bay, including one shutout. The first-year backstop was also 7-1-2 with a 1.76 GAA, .934 SV% and two shutouts in 10 regular-season starts at home. 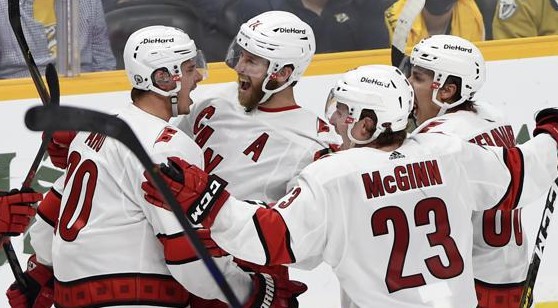 The goal total has gone UNDER in four of the last five meetings played between the Tampa Bay Lightning and the Carolina Hurricanes. (AP)

The Lightning have dominated this series over the years, winning 24 of the past 34 meetings overall, but the home team has cashed in four of the past five meetings overall. Tampa Bay has won two of three playoff games on the road so far this season.

The Hurricanes won all three of their playoff games at PNC Arena against the Predators, outscoring the opposition 11-4, with one game going to overtime (Game 5). The final four outings in the series were one-goal games, with all four going to at least one overtime.

Sebastian Aho led the Hurricanes in both goals and points against Nashville, posting five goals with seven points and a plus-4 rating. Captain Jordan Staal lit the lamp four times with five points with Martin Necas going for two goals and five points, while Dougie Hamilton, Brock McGinn and Brett Pesce were third on the team with four points.

For the Lightning, Nikita Kucherov made his season debut in Game 1 against the Panthers after missing the entire regular season recovering from hip surgery. He was one-man wrecking crew, posting three goals with a team-high 11 points against Florida. Victor Hedman (0 G, 8 A), Alex Killorn (4 G, 4 A) and Steven Stamkos (3 G, 5 A) were each second with eight points apiece vs. FLA. Killorn and Brayden Point led the team with four goals each.