The Montreal Canadiens are coming off a scintillating and tiring seven-game series against the Toronto Maple Leafs, and they just wrapped up play on Monday. The Winnipeg Jets had to work overtime in three of four games against the Edmonton Oilers, but they pulled off the sweep in that series, and they haven't played since May 24.

We saw a similar situation in the Vegas Golden Knights-Colorado Avalanche series, as VGK had a seven-game set and just two days between series, while the Avs had an extended rest after a sweep. There was concern Colorado might have some rust, while Vegas would be sharp, but it was the complete opposition. The Avs rolled to a 7-1 blowout win. I like the rested Jets to pick up the win in the series opener, although I don't think we see a blowout like Colorado administered.

It's surprising that both of these teams are here, as each series win was considered an upset. But it's not as surprising considering how well their goaltenders played. Price went 4-3 with a 2.24 GAA and .932 SV% against Toronto, while Hellebuyck went 4-0 with a 1.60 GAA and .950 SV% in the sweep of Edmonton.

These teams obviously saw a lot of each other during the regular season, too, with Price going 4-2-1 with a 3.01 GAA and .903 SV% in seven regular-season games against Winnipeg. Hellebuyck was 6-3-0 with a 2.67 GAA and .916 SV% with one shutout in his nine regular-season appearances against Montreal. 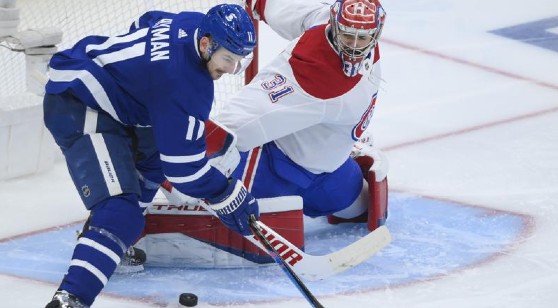 The goal total has gone OVER in four of the last five meetings between the Montreal Canadiens and the Winnipeg Jets. (AP)

The Canadiens haven't really been able to string together victories in the second half of the season, going 6-15 across their past 21 games following a win. Of course, they have strung together three in a row coming into this series, erasing a 3-1 deficit to in seven games against the Maple Leafs. While Montreal is likely thrilled to be in the second round against Winnipeg, they're just 3-7 in the past 10 tries against the Jets.

The Jets have won six games in a row, including the final two games of the regular season, and they're a perfect 4-0 in the past four at home. They were an underdog in each of their four games against the Jets, which might be where they'd rather be. They're 1-5 in the past six as a favorite, and 0-5 in their past five playoff games when favored.

While rust could potentially be a factor, with Winnipeg just 5-12 across the past 17 when working on three or more days of rest, I expect the Jets to come out flying, pun totally intended, and take care of the tired Canadiens before a Montreal bounce back in Game 2.