Montreal’s Game 1 win over Winnipeg was somewhat overshadowed by how the game ended. Rookie center Jake Evans was chasing down a loose puck to ice the game for the Canadiens, and he was absolutely blasted by Winnipeg’s Mark Scheifele.

A half-second after Evans put the puck in the back of the net, he was leveled by Scheifele, setting off a melee that will have ramifications for Game 2 on Friday night.

Evans had to be stretchered off the ice, while Scheifele has been informed he will face a four-game suspension for the hit. That will certainly hurt Winnipeg as Scheifele led the Jets with 63 points and 42 assists in the regular season.

Neither one of these teams can do a lot on offense, and they both have solid goaltenders. That makes the ‘Under’ the best play as these teams will play a very punishing style. 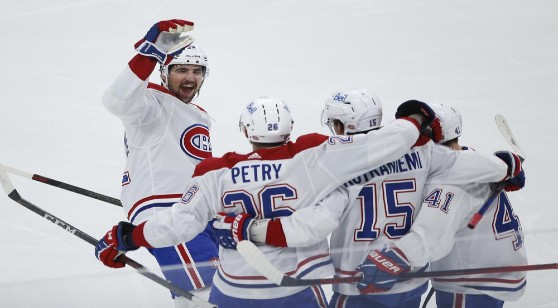 The Montreal Canadiens have now won four straight games after trailing 3-1 in Round 1 to the Toronto Maple Leafs. (AP)

Mark Scheifele will be missed over the next four games. Scheifele had two goals and three assists in Winnipeg’s first-round sweep of Edmonton. He is the first-line center for the Jets, and it won’t be easy to replace his production.

Kyle Connor and Blake Wheeler are going to need to carry this offense while Scheifele is out. Connor has three goals and two assists this postseason, while Wheeler has two goals and three assists. We saw Connor score late in the third period in Game 1 on Wednesday to cut the deficit to 4-2.

Winnipeg needs to get back in the swing of things too. The Jets swept the Oilers in four games, but they had to wait nine days until their next game as Montreal and Toronto needed seven games to determine their series. It was evident the Jets were a little rusty, as the Canadiens jumped on them with two goals in the first five minutes.

Connor Hellebuyck should have a much better performance in Game 2. Hellebuyck was lights out in the Edmonton series, effectively stonewalling the best line in the league. He has a 4-1 record with a 2.01 GAA and a .937 save percentage in the playoffs.

The Canadiens are starting to believe they are a team of destiny. Montreal pulled off one of the biggest upsets we’ve seen in the modern era by overcoming a 3-1 deficit to beat the Maple Leafs. They finished 18 points behind the Maple Leafs in the regular season, but they were able to prolong Toronto’s postseason misery.

Carey Price will be the key for Montreal in this game and throughout the playoffs. Price is one of the best netminders in the league, and he has a 5-3 record with a 2.33 GAA and a .928 save percentage. Price has a career 2.42 GAA with a .918 save percentage in the playoffs, and he seems to always rise to the occasion this time of year.

Veteran Eric Staal has been Montreal’s most consistent scorer this postseason. Staal had two assists in Game 7 against Toronto, and he started off this series with a goal and an assist. Tyler Toffoli, Nick Suzuki, and Corey Perry have provided enough offense, but there isn’t a real playmaker on this team. The Canadiens had hoped Shea Weber would fill that role after he was acquired in the PK Subban trade, yet Weber has been somewhat underwhelming.

Weber has logged the most ice time of any player on the Canadiens. He has just one assist in eight games though, and he takes a lot of unnecessary penalties. Weber served 16 minutes of penalties in the Toronto series, and he can’t be in the box that often against the Jets.